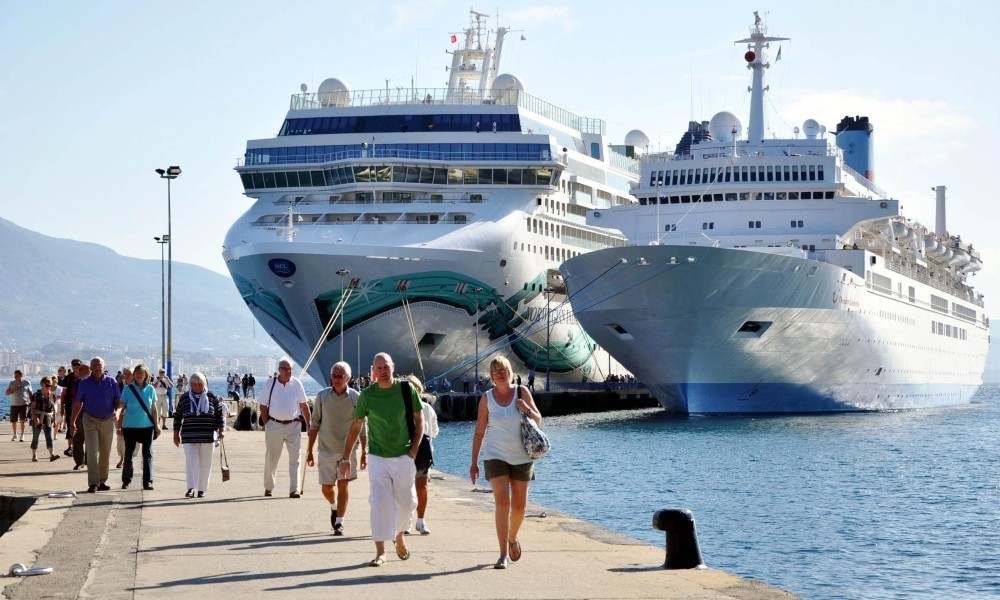 As an incentive to the sector, the government will give financial support of $30 per passenger to travel agencies to increase the number of cruise tourists
by Daily Sabah with AA Jun 06, 2017 12:00 am

With incentive provided for cruise tourism, which has been hit hard by the recent crisis with Russia and other developments in 2016, sector professionals now keep their hopes high and aim to lure more tourists from the U.S.

To encourage cruise ships to come to Turkey, the government will provide financial support of $30 per passenger to travel agencies to increase the number of cruise tourists, which amounted to two million in 2015 and is currently 600,000.

This support will be provided to A-group travel agencies that bring 750-passenger capacity cruise ships and above to Turkey.

Speaking to Anadolu Agency on the issue, the chairman of the Association of Turkish Travel Agencies (TÜRSAB), Başaran Ulusoy, said that according to the United Nations World Tourism Organization (UNWTO), Turkey was the sixth most-visited country in the world by the end of 2015.

However, the negative developments that started with the Turkey-Russia crisis and continued into last year caused Turkey to lose significant momentum in tourism.

Recalling that the Ministry of Culture and Tourism announced a series of measures in order to prevent the decline in the number of tourists, Ulusoy said that the work on the cruise tourism reached the final stage after fuel support was provided to A-group travel agencies that carry tourists to Turkey by air.

Ulusoy stated that the Ministry of Culture and Tourism provides incentives for cruise ships and explained that they would bring the matter to the Council of Ministers.

"This announcement is undoubtedly pleasing for cruise tourism, one of the areas that has experienced the most serious regression since last year," he said.

Ulusoy stated that the goal the ministry has set in this direction is of great importance, underlining the fact that tourists from the U.S. constitute the group that has taken the greatest interest in cruise tourism worldwide.

"As TÜRSAB, we have been attending the Seatrade Cruise Global Fair, which is held in Fort Lauderdale, the U.S., and is accepted as the world's most important cruise tourism trade fair event, for the past two years in order to reach the cruise tourism potential of the U.S. and attract more tourists to our country from this market," he said.

According to Ulusoy, as the minister expressed, it is very natural that Israeli companies are in search of establishing cooperation with Turkey for cruise tours, as they are regional tours. And the fact that the two countries are located in the Eastern Mediterranean makes cruise tours, including the two countries, possible.

The TÜRSAB chair also noted that Turkey is a country with low tourism revenues compared to the number of tourists it hosts. He continued by saying that, despite being the sixth most visited country in the world according to UNWTO data for 2015, it ranks 12th in terms of tourism revenue.

"One of the most important issues for the Turkish tourism sector is to increase tourism revenue," he said.

Ulusoy emphasized the fact that the support necessary for cruise tourism is crucial for the diversification of tourism and the attraction of high-income group tourists to Turkey. He stated that the cruise tourist profile also positively affects the overall tourism image of the country, noting that the development of cruise tourism allows both increasing Turkey's tourism revenues and raising the country's profile as a better tourist destination.

Ulusoy added that upgrading and modernizing the infrastructure of the existing ports and increasing the port capacities will contribute to the targeted growth in the cruise tourism in the upcoming years.

According to Ulusoy, considering the number of cruise tourists Turkey has hosted in recent years, Kuşadası, Istanbul, İzmir, Bodrum and Marmaris ports stand out among others, while Antalya and Mersin ports have a great potential.

Another cruise port necessary in İzmir

"We will continue to survive without losing hope. The most important thing we must do in this process is to incessantly carry out promotional activities as if there were no crisis," İşler said.

He also expressed that they request the government to increase its support for promotion to this sector and to promote İzmir at cruise tourism fairs and congresses held in different countries of the world.

He pointed out that sometimes two or three cruise ships carrying some 6,000 tourists dock at İzmir's port in the dynamic periods of the sector.

İşler underlined that it is crucial to construct a new cruise port in İzmir, which aims for dynamism throughout the year, to eliminate this congestion.

Expressing appreciation for the Ministry of Culture and Tourism's endeavors to support the cruise tourism, İşler said, "We know that the issue of cruise tourism was laid on the table during Minister Avcı's visit to the Mediterranean Tourism Fair in Israel and that Turkish and Israeli representatives negotiated on joint studies. Israel has a very serious influence on the cruise market. Of course, we tourism professionals are delighted with Minister Avcı's announcement that U.S. tourists take greater interest in cruise voyages and Israel wants to cooperate on package tours."

İşle also emphasized that the inclusion of Egypt and Greece, starring countries in Mediterranean tourism, in the joint work to be carried out with Israel will contribute to regional peace, adding, "We want it to be implemented as soon as possible."

He stated that tourists coming to Çeşme, İzmir or Kuşadası ports by cruise voyages will invigorate all the tourism destinations in the region spanning from Selçuk to Bergama.

"While tourists spending nights in the long term and generating economic value for cities are important, cruise tourism leaves important impressions on tourists in terms of at least seeing cities and having an idea about them," he said.

According to İşler, cruise tourists visiting İzmir want to come to the city again, because it appeals to them in all segments thanks to its tourism diversification.

Referring to the fact that the number of blue-flag beaches in İzmir has risen to 51, İşler said the city renders service with its beaches and high-quality facilities to tourists.

"Listed in the UNESCO World Heritage List, Selçuk and Bergama have unique archaeological values. And it is very easy to access these sites with the city's advanced transportation network. İzmir has a colorful range of tourism routes from the Bird Paradise to the Natural Life Park, and from ecological villages to festivals that give unique cuisine experiences," he said.