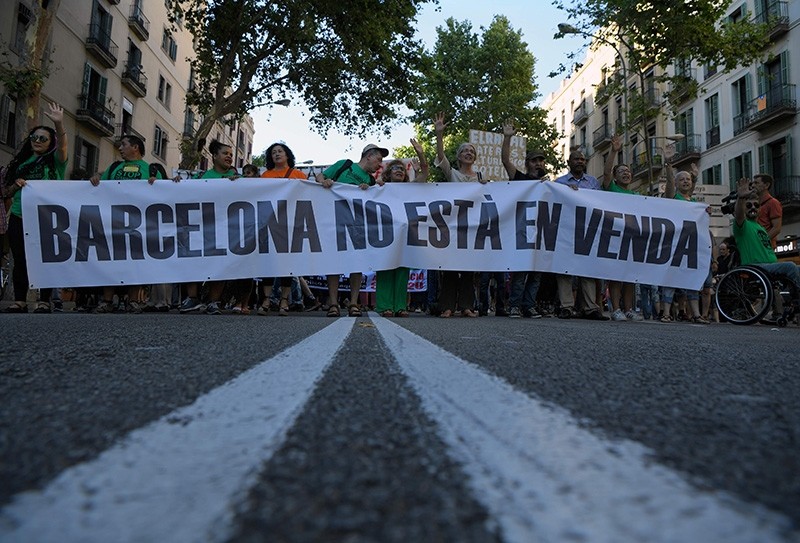 Protesters holds a placard that says: ,Barcelona is not for sale, during a demonstration in Barcelona on June 10, 2017 against what they claim is a lack of control by the city's tourism management. (AFP Photo)
by French Press Agency - AFP Jun 24, 2017 12:00 am

Tourism has become the main issue of concern for Barcelona's residents ahead of unemployment, according to a survey published Friday by the city hall of the popular seaside resort.

Rising rental prices, noise and crowds jostling for space in the streets, the disappearance of traditional, every-day stores have all become irritants for those who still live in the central districts of the Mediterranean city, which gets millions of visitors every year.

According to the survey, tourism in this 1.6-million-strong city was considered a problem by 19 percent of the 800 people polled, overtaking unemployment and working conditions which came in at 12.4 percent and had since 2009 always been the top concern.

"This isn't a problem of 'tourist phobia,' people in Barcelona like to travel and appreciate people visiting," said Deputy Mayor Gerardo Pisarello.

"It's about a concrete malaise caused by overcrowding in certain districts."

But according to the city hall, this figure shoots up to 30 million if other rental options such as Airbnb lets are taken into account, as well as those who stay in the suburbs.

Authorities have banned the opening of new hotels in the centre and fined home rental platforms Airbnb and Homeaway 600,000 euros ($670,000) for marketing lodgings that lacked permits to host tourists.

However tourism is one of the city's main engines for growth, generating 14 percent of its economic wealth and 65,000 direct jobs.