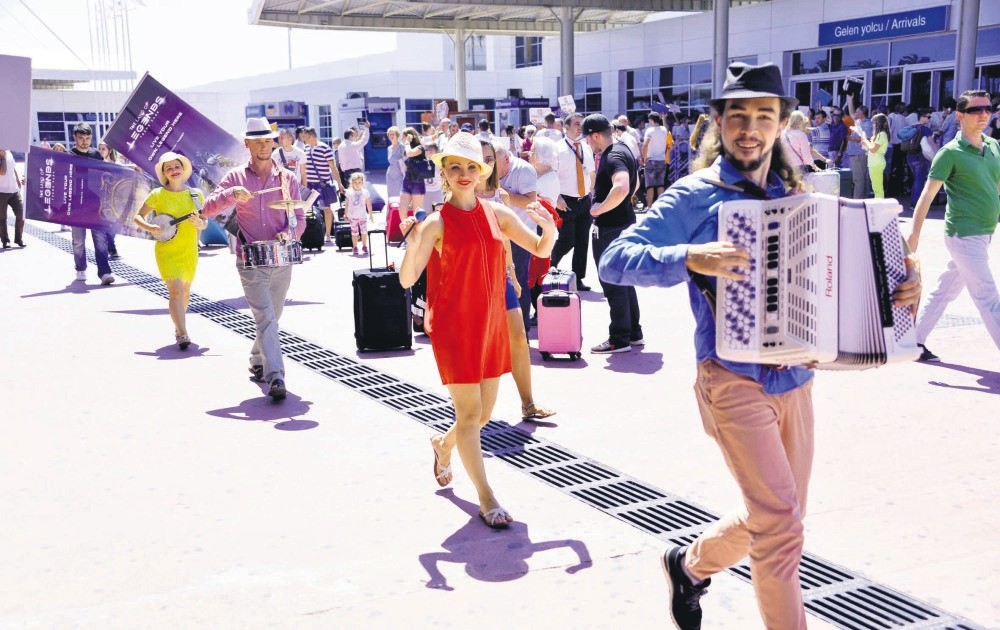 Tourism was badly hit by the strained Turkish-Russian ties. Yet the strong will of the countries' leaders and governments has enabled a recovery in economic relations, which is observed in the increasing number of Russian tourists, preferring to spend their vacation in Turkey

Developing relations between Turkey and Russia with mutual steps from both leaders following the jet downing crisis in November 2015, have also reflected on tourism. The number of Russian tourists traveling to Turkey has increased 15 times. The industry is expecting all-time records to be broken this year.

The tourism market catering to Russians, which suffered losses for the past two years due to Russia's economic crisis in 2015, followed by the jet downing crisis, has taken a spectacular turn in 2017. The relations that have developed with the farseeing steps taken by the leaders of the two countries and the recovering Russian economy have caused a stir in the number of Russian tourists.

According to the data announced by the Culture and Tourism Ministry, the number of tourists coming from Russia in May increased by 1,383 to 608,472.

Indicating that there is intense demand from Russia, sector representatives reported that they have trouble finding aircraft to meet demands. If the aircraft crisis is resolved, the 2014 figures will also be exceeded.

All-time records to be broken

Osman Ayık, chairman of the Turkish Hoteliers Federation (TÜROFED), stated that among the best markets of Turkey in 2017 are Russia, CIS (Commonwealth of Independent States) and Ukraine.

"There is a demand from Russia which exceeds our expectations. We expect this year to exceed 2015 figures. If it maintains this tempo, we think that the figures of 2014, which we broke a record in the number of Russian tourists, will also be surpassed," Ayık said.

Meanwhile, Neşet Koçkar, chairman of the Anex Tour, one of the biggest tour operators in Russia, said that they could not find enough aircraft to meet the intense demand from Russia.

"If we overcome the aircraft problem, we can break the all-time record in the number of Russian tourists," he added.

According to the figures announced by the Culture and Tourism Ministry, the number of foreign tourists entering Turkey in May increased by 16.3 percent to 2.9 million compared to the same period of the previous year. In the first five months, the number of tourists climbed 5.6 percent to 8.7 million. Russian tourists' share of 1.65 percent in May last year rose to 21.06 percent this year, exceeding 13.17 percent recorded in 2014. The Russians were followed by Germans with 10.2 percent and Georgians with 8.2 percent. Russians constituted 10.6 percent of the total number of tourists in the first five months.

The TÜROFED chairman underlined that 2015 figures can be surpassed if the recession in the European market halts.

Noting that there has been an increase in last-minute sales in Europe, Ayık said schools in Europe are on holiday and there is still a serious population that has not booked vacations yet. He added that since destinations such as Spain and Greece have reached their capacities, Turkey stands out as the best alternative.

Recalling that there the number of German tourists dropped by 250,000 people in the first five months of the year compared to the previous year, Ayık said that this loss could be compensated with last-minute sales.

Antalya's Belek district, which has managed to make a name for itself in the international arena with golf tournaments, is now aiming for tennis. The final match of the ATP World Tour 250 Antalya Open Tennis Tournament will be held on Saturday in Belek. The tournament is being hosted by Kaya Palazzo with the support from Ministry of Youth and Sports and the Ministry of Culture and Tourism as well as the contributions from the Turkish Tennis Federation.The Antalya Open, the world's seventh and Turkey's first grass pitch tennis tournament, is regarded as the last tournament on the way to the Wimbledon Grand Slam tournament, set to take place in a week.

Burak Kaya, chairman of Kaya Hotels, said that international organizations are needed in order to break the negative perception carried out abroad against Turkey.

Kaya said they made a serious effort to bring this organization to Turkey, recalling that last year Turkey experienced the most difficult periods of its history.

"Nevertheless, we have never lost our faith in our country. We were able to convince the ATP in the wake of the intensive negotiations we conducted in 2016. We spent $10 million for the organization," he said.

Kaya stated that they signed a 3-year contract for the tournament, as well as a preliminary agreement for top five figures of tennis such as Andy Murray, Roger Federer and Novak Djokovic to come to Antalya next year.

Noting that the final match to be played tomorrow will be watched by about 10,000 people at Kaya Palazzo's pitch, Kaya added that the match will also be broadcast live in 80 countries, corresponding to $300 million in advertisements.