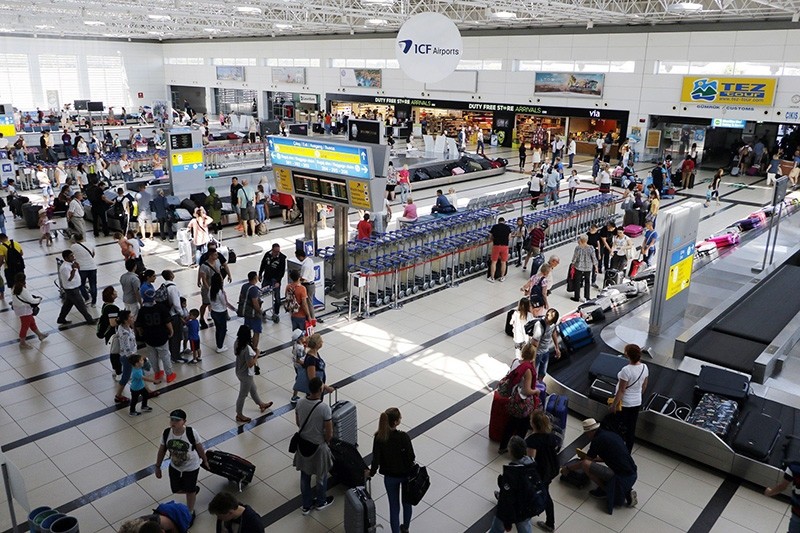 Since a rift in Turkish-Russian relations after the jet downing crisis in November 2015, Russian tourists increased their spending in Turkey as the normalization of relations has resumed.

With the normalization of the relations between the two countries, the number of tourists who came to Turkey from Russia increased rapidly, climbing to 763,727 in June 2017.

While the number of foreign visitors in Turkey in the first half of 2017 stood at 12.2 million with an increase of 14.5 percent compared to the same period of the previous year, Russians led the way among the countries with tourists in Turkey, recording the largest number of visitors with 1.7 million tourists.

According to Global Blue Turkey, which provides a value added tax (VAT) refund service to foreign visitors shopping in Turkey, Russians applied for VAT refunds for a total of TL 630,000 ($178,000) in purchases made in the month of July last year, while this figure increased to TL 3.2 million this year.

Thus, Russian tourists' purchases in July in the country increased by 403 percent compared to the same period of the previous year.

The increase in the number of Russian tourists also reflected favorably on Turkey's retail sector.

Spending an average of TL 977 on a monthly basis in July last year, the average Russian tourist spent TL 1,140 in the same period of this year with an increase of 17 percent.

The Chinese followed the Russians in the amount of spending in Turkey in July, according to data provided by Global Blue Turkey.

During this period, Chinese spending in Turkey increased by 314 percent compared to the same month last year. While they applied for a VAT refund for TL 1.2 million in spending, this figure stood at TL 5 million in the same period of this year.

On a country-by-country basis, the average amount spent by foreigners in Turkey rose among Chinese tourists from TL 1,241 to TL 2,547, followed by Kuwaiti tourists with an increase of 140 percent, Iraqis with 115 percent and Germans with 91 percent.

In terms of spending, other countries included Saudi Arabia with 66 percent, the United Arab Emirates with 65 percent, "other countries" with 52 percent, Azerbaijan with 50 percent, Iran with 45 percent and Qatar with 40 percent.

'2015 figures can be surpassed with Russian tourists next year'

"We can say that we have not reached 2015 figures yet but our confidence has started to take new shape and we are compensating for our losses quickly," Şeyhun said.

Noting that the number of Russian tourists could reach the heights of 2015 figures next year, he said confidence has been rebuilt between Turkey and Russia, adding that the most important issue is to ensure the continuity of security and relations.

On the other hand, he pointed out that there has been tremendous growth in the amount of spending by Chinese tourists in Turkey.

Highlighting that growth in terms of foreign tourism from Middle Eastern countries continues and is expected to grow, Şeyhun emphasized that Middle Easterners are comfortable in Turkey and do not regard Turkey as a strange country.

He added that the convenient tourist visa process and ease of traveling in and out of Turkey are factors that make it appealing to foreign tourists.

"July saw a better growth rate than the month of June. The shift we saw during the period of Ramadan had a more positive effect on numbers in July," he noted.