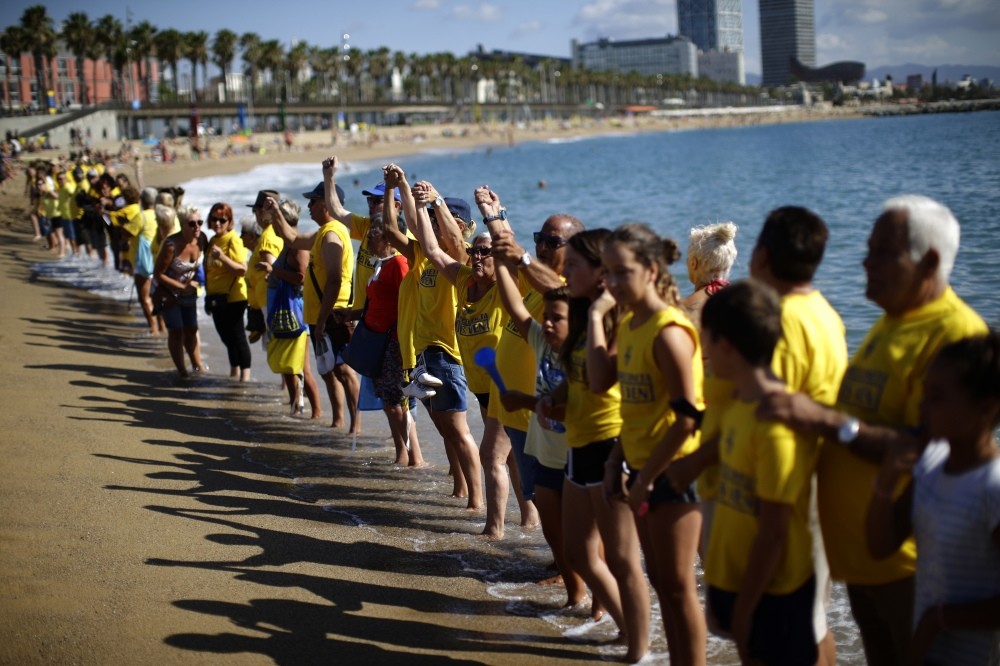 People form a human chain during a protest against tourism in Barcelona. The residents claim that the influx of tourists has increased the price of rents and produced a spike in rowdy behavior by party-seeking foreigners.
by Aug 18, 2017 12:00 am

From the romantic canals of Venice to the walled medieval town of Dubrovnik and the wilderness of Scotland's Isle of Skye, tourism is turning into a nightmare for many locals despite the jobs and income it undoubtedly generates

Exasperated with the hordes of visitors they blame for making their city unliveable, Barcelona residents have risen in protest. The hugely popular Catalan metropolis has become the latest European hotspot to eye tourism with hostility. From the romantic canals of Venice to the walled medieval town of Dubrovnik via the wilderness of Scotland's Isle of Skye, tourism is morphing into a nightmare for many locals, despite the jobs and income it undoubtedly generates. In the trendy seaside Barceloneta district of Barcelona, residents have for years complained about anti-social behavor like drunkenness and sex in public areas, as well as a leap in rental prices that has forced many locals out.

"We don't want tourists in our buildings," read banners in a protest over the weekend, in which dozens of locals took to a beach that draws revellers from all over the world. Similar demonstrations have flared in other parts of Spain, the world's third tourism destination. This summer in Palma de Majorca in the popular Balearic Islands, activists burst into the port, setting off flares of red smoke and throwing confetti over people eating at a restaurant. Others assaulted a bus full of tourists in Barcelona, painting over its windscreen and giving passengers a fright. Beyond these protests, officials too have started addressing the problem of overcrowding.

The Balearic Islands, for instance, have just limited to just over 623,000 the number of visitors that can stay in hotels or legal rental accommodation in one go. Faced with the protests and criticism, Spanish Prime Minister Mariano Rajoy was forced to defend a sector that counts for 11 percent of Spain's economic growth.

"I never thought I would have to defend the Spanish tourism sector, it's really unprecedented," he said earlier this month. Tourism is a major source of growth outside of Spain too. According to the World Tourism Organization (UNWTO), one in 10 jobs worldwide is tied to a sector that generates 10 percent of global GDP.

From 1995 to 2016, the number of international travellers went from 525 million to 1.2 billion thanks to low-cost companies and visitors from emerging markets like China, India and the Gulf countries. As a result, some destinations are now sagging under the weight of tourists. Dubrovnik in Croatia is a favourite with cruiseships - a popularity that soared even further when it was used as a backdrop in the smash TV series "Game of Thrones."

The walled old town is a delight of 17th- and 18th-century architecture. Locals, though, do their best to avoid it, saying it is almost impossible to move in the congestion.

"Sometimes to enter the old part of town, you need to queue for an hour in 40-degree (104 degrees Fahrenheit) heat," says 27-year-old Ana Belosevic, who works in the hotel business. Mayor Mato Frankovic told AFP that cameras have been set up to monitor the number of people entering the old town and authorities plan to reduce the number of cruiseships coming into the port. Similar measures have also been taken on the other side of the Adriatic Sea in Venice, which counts 265,000 inhabitants for around 24 million visitors annually. Authorities there have decided to trial a system that forces visitors to make a reservation if they want to go to the popular Saint Mark's Square during peak hours.

In Florence, meanwhile, authorities have started hosing down public spots such as church steps where many visitors congregate to eat picnics, to stop them from sitting down. One of the solutions to overcrowding is to encourage visitors to go to less visited districts, thus easing up city centres. But this has merely expanded the problem to districts that were once tourist-free. In Lisbon, the boom in visitors has had a significant impact on residents in its oldest district, Alfama, which is now full of tourism flats that raise property prices.