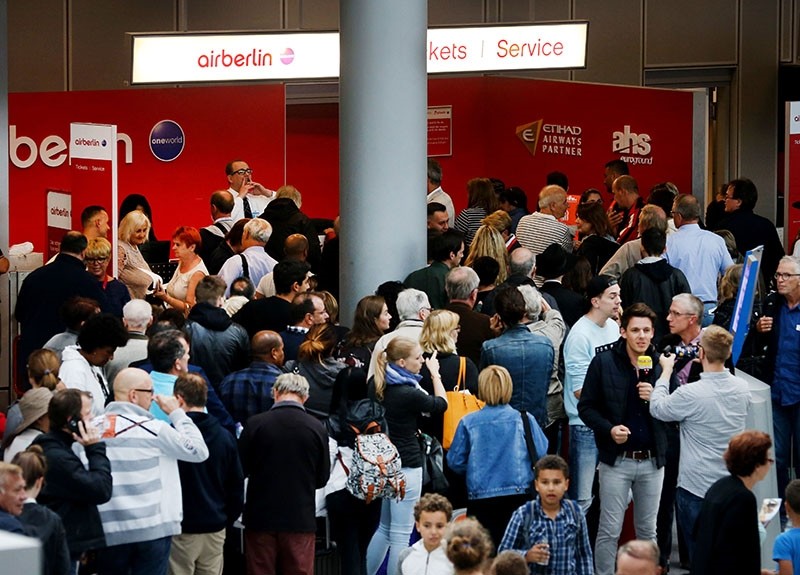 Flight passengers crowd in front of the desk of German airline Air Berlin at the airport in Duesseldorf, western Germany, on September 12, 2017, after the troubled airline had to cancel flights due to ,operational reasons., (AFP Photo)
by Compiled from Wire Services Sep 12, 2017 12:00 am

Insolvent Air Berlin said it has cancelled around 70 flights so far on Tuesday, affecting both its own operations and flights it carries out for Lufthansa's Eurowings, after pilots called in sick in unusually high numbers.

The cancellations come as a deadline approaches for investors to bid for the assets of Germany's second largest airline, with Lufthansa seen in pole position to acquire large parts of its rival.

A spokesman for Eurowings, which leases 33 crewed planes from Air Berlin, said it also expected short-haul flight cancellations as a result of the sickness-related absences.

However, the budget carrier expects to carry out the majority of its 650 planned flights for today because it would take measures such as rebooking customers onto other flights or trains and using standby planes and crews.

Around 200 pilots, mainly captains, had called in sick. Both domestic and international flights were affected, including links between Berlin and Los Angeles or Dubai.

TUIfly was also forced to cancel flights last year after many pilots called in sick, with their union saying staff were concerned that merger talks, since failed, could lead to job and pay cuts.

The airline said cancellations are threatening its existence and hurting its chances of saving jobs as it seeks investors for parts of the business.

"No company could possibly be seen in a worse light than Air Berlin today," Chief Operations Officer Oliver Iffert said in a internal memo to staff seen by Reuters.

"We must return to stable operations. That is crucial in order to bring talks with investors to a successful conclusion," he added.

However, union Vereinigung Cockpit said in a separate statement it was surprised by the absences and that it had not called on its members to call in sick.

Air Berlin filed for insolvency in mid-August, after its main shareholder Gulf carrier Etihad pulled the plug on its cash lifeline.

The airline had for years struggled for survival, and booked losses amounting to 1.2 billion euros ($1.4 billion) over the past two years.

In order not to leave travelers stranded during the busy summer season, the German government agreed to provide a bridging loan of 150 million euros to keep the airline flying for three months.

The insolvent group is now hoping to complete its sale this month, with a Friday deadline for potential bidders to present their offers.

Lufthansa -- which already leases 38 of Air Berlin's 140 planes -- could buy up to 70 aircraft with as many as 3,000 crew for Eurowings, German media had reported.

Bidders have until Sept. 15 to submit binding offers, with a decision possible as early as Sept. 21, three days before a German national election.