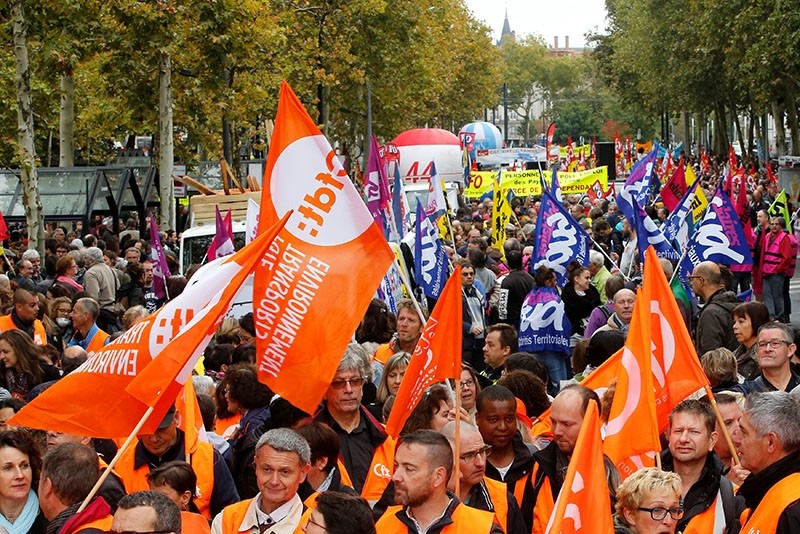 Public sector workers hold flags of the French Democratic Confederation of Labour union (CFDT) during a demonstration as part of a nationwide strike against French government reforms in Nantes, France, October 10, 2017. (Reuters Photo)
by Compiled from Wire Services Oct 10, 2017 12:00 am

Some 5.4 million public sector workers will walk out, with almost 130 gatherings and events planned across 90 French departments. It is the fourth major industrial action since French President Emmanuel Macron came to power last May.

The strike was called by the country's nine major unions, including the CFDT, CGT, FO and Unsa unions, to protest labor reforms in general and in particularly plans to freeze pay, tighten rules for sick days and to cut 120,000 jobs in the public sector by 2022.

France's civil aviation authority called on airlines to cancel 30 percent of their flights and trams, buses and underground trains are expected to be affected until tomorrow morning.

Police, teachers and for the first time since 2009, medical staff, are participating as well.

Carrier Air France says it expects to run all long-haul flights to and from Paris airports, but to cancel about 25 percent of domestic flights due to a walkout by some traffic controllers.

Turkish Airlines on Tuesday said some of its flights to France had been cancelled.

According to the airline, France's civil aviation authorities issued a warning due to the strike as millions of workers -- including those in French airports -- protest government labor reforms and planned job cuts.

General rail services are not affected.

Despite Tuesday' strike, the country's major unions have failed to agree a common strategy to face down the government's reforms after holding a joint meeting late on Monday.

Veronique Descacq, CFDT deputy secretary-general, said the unions plan to meet again on Oct. 24. The Communist Party-linked CGT called for another day of mobilization on Oct. 19.

Macron -- who is in Germany today meeting Chancellor Angela Merkel -- last month signed into law five decrees which contained the controversial reforms. These are expected to take effect by Jan. 1 next year after other decrees are signed before the end of 2017.

For the French leader and Prime Minister Edouard Philippe, the reforms aim to modernize the country's 3,500-page labor code.

However, Philippe Martinez, the head of the CGT, has branded the reforms a "social coup d'etat".