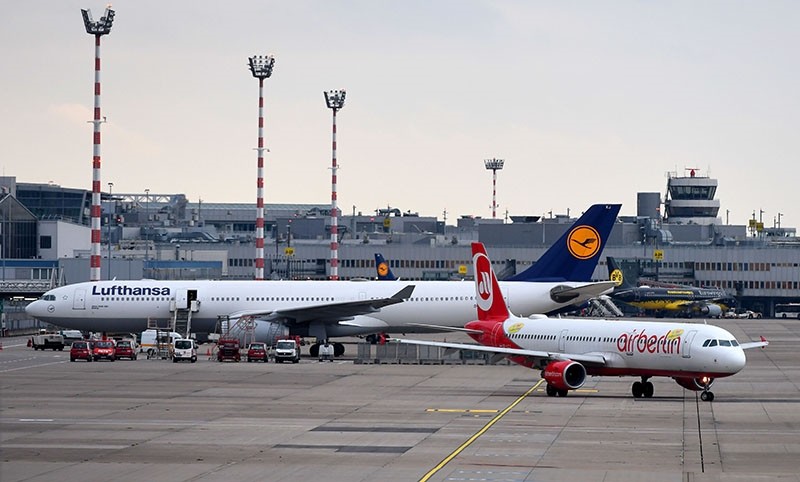 An airplane operated by German airline Air Berlin rolls on the tarmac past a Lufthansa plane on Oct. 10, 2017 at Duesseldorf Airport, western Germany. (AFP Photo)
by Compiled from Wire Services Oct 12, 2017 12:00 am

Lufthansa and Air Berlin are to sign a contract later on Thursday to acquire sections of the embattled carrier, which filed for insolvency in August after its main shareholder, Abu Dhabi-based Etihad Airways, halted financial aid for the group.

On a "great day" for the Frankfurt-based carrier, it will sign a contract to buy 81 of Air Berlin's 144 planes and take on 3,000 of its 8,500 staff at noon (1000 GMT) Thursday, Spohr said -- the last day for bidders Lufthansa and Easyjet to close their hoped-for deals.

"This is indeed a big day, which we're going to seal with a signature in a few hours," Spohr said, sending Air Berlin's shares rocketing up by 51 percent in early morning trading on the Frankfurt Stock Market.

Investors believe that Lufthansa will profit from the debt-laden Air Berlin's breakup, driving up shares in the Cologne-based group by 2.4 percent, to 25.6 euros, on the Frankfurt bourse even before Spohr's announcement.

Apart from Lufthansa, British budget carrier Easyjet was seen as the other major contender to take over the embattled airline, or parts of the group, which has more than 8,000 employees, 140 aircraft and key airport landing slots.

Spohr told the daily Rheinischen Post on Thursday that Lufthansa plans to invest 1.5 billion euros in taking over 81 Air Berlin aircraft - about half of the carrier's fleet - and hiring 3,000 of its employees.

German media have reported in recent weeks that the yellow-and-blue-liveried carrier could pay as much as 300 million euros ($356 million) for around 80 planes -- a figure Spohr cited as the largest competition authorities would accept Lufthansa grabbing.

Easyjet is negotiating with Air Berlin to possibly acquire the remaining 20 to 30 aircraft from the carrier, which last year ran up a loss of about 782 million euros and has debts totaling nearly 1.2 billion euros.

Air Berlin has already said that it is hopeful that 80 percent of its employees will be able to find new jobs.

Spohr told the Rheinischen Post he did not believe Lufthansa's deal with Air Berlin would result in higher airfares. Instead, he saw ticket prices falling.

"The competition will intensify in both Europe and worldwide," he told the newspaper. "We are assuming further declines in prices," he said.

Air Berlin has kept flying since August as a result of the German government providing it with a bridging loan of 150 million euros.

However, on Monday, Air Berlin announced that it would end all flight services by October 28.

Flights operated by Air Berlin subsidiaries Niki and LG Walter, which are not insolvent, will continue indefinitely, the company said.

The agreement will need a green light from European authorities in a process that could take "several weeks or months," Air Berlin chief executive Thomas Winkelmann said last week.

Meanwhile, unions have complained that many of Air Berlin's staff face an uncertain future, with no guarantee they will find work with the buyer firms once the company is wound up -- despite promises when talks with Lufthansa and Easyjet began that most would find jobs with the bidders.

Air Berlin had been Germany's second-biggest carrier after Lufthansa. The airline carried some 80,000 people a day mostly on short-haul destinations.