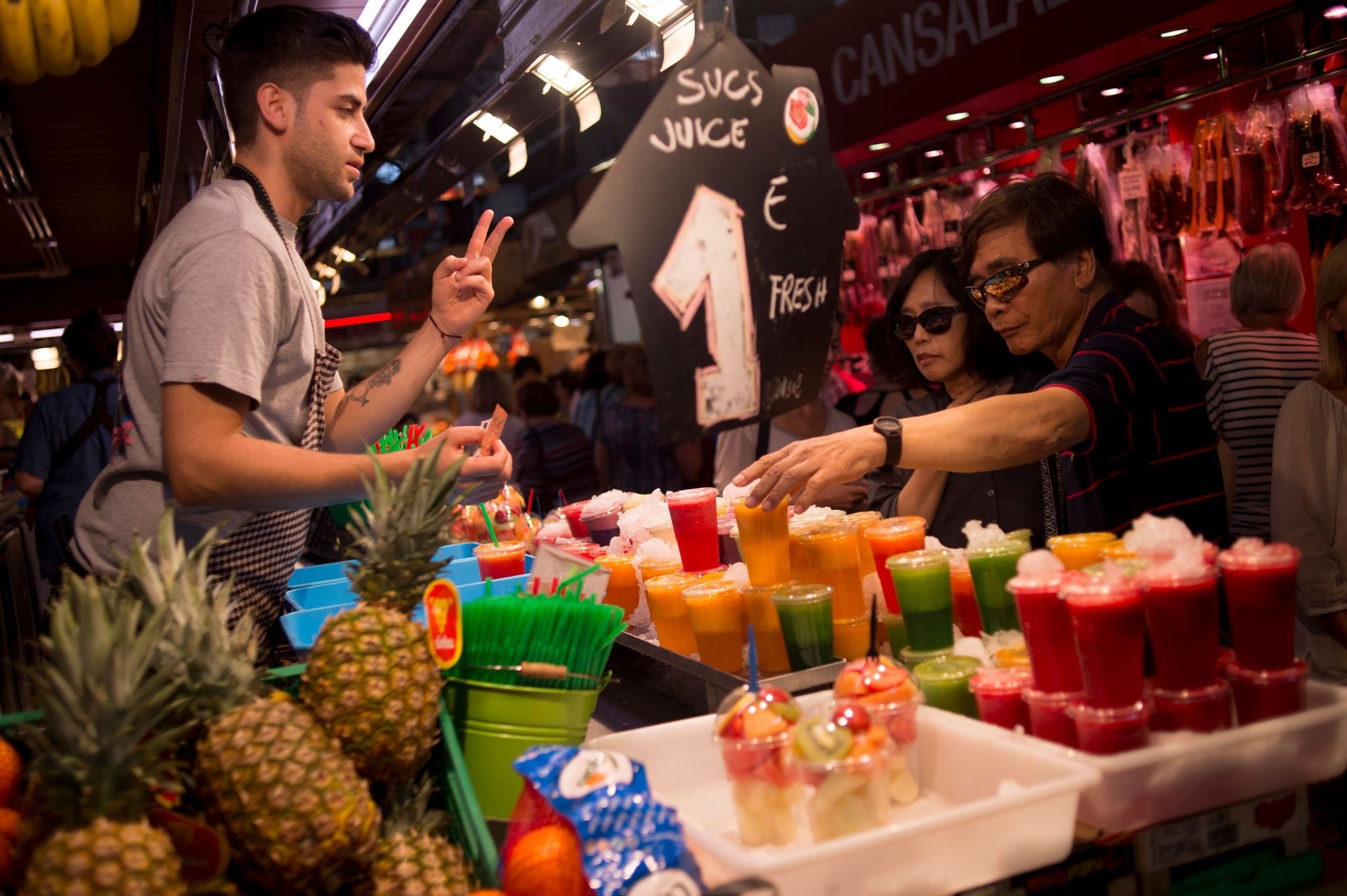 Two tourists buy some juice at u2018La Boqueriau2019 market in Barcelona. Spainu2019s government said it could lower its forecast for next yearu2019s economic growth if the crisis over Cataloniau2019s independence drive persists.
by Oct 19, 2017 12:00 am

Catalonia's independence push is taking its toll on the region's tourism industry, with revenues and hotel bookings down since a banned Oct. 1 independence referendum that was marred by police violence

Catalonia, with its capital Barcelona and Costa Brava beaches, is the Spanish region that most attracts foreign visitors. More than 18 million visitors went in 2016, or a quarter of all foreigners who came to Spain. But images of police beating would-be voters as they tried to stop the independence referendum and the massive street demonstrations in Barcelona that followed the vote had dampened visitors' enthusiasm.

"The tourism sector is one of the most strongly affected by the instability," Prime Minister Mariano Rajoy told parliament last week as defended his government's handling of the Catalan crisis. Catalonia's tourism activity slumped by around 15 percent during the first two weeks of October compared to the same time last year, according to industry lobby group Exceltur. Barcelona's emblematic Las Ramblas boulevard was still packed with locals and tourists yesterday, who sat in the sun on outdoor terraces or drove by on open-top buses. But local shop owners complain of a slump in activity.

"You feel it, there are less tourists since Oct. 1. Our sales have dropped by about 25 percent, it's very worrying," Susana Garcia, 44, who runs a confectionery stand on the boulevard, told AFP.

"If you watch TV, and you see Barcelona and police hitting people, and people saying there is no democracy, would you go there?"

Jose Luis Morais has noticed a similar drop in business at his nearby newspaper stand, but he thinks it has "more to do" with the jihadists attacks in Barcelona and the nearby resort of Cambrils in August that killed 16 people "than because of the political situation."

Catalonia's tourism activity dropped by around 5 percent in September in the wake of the attacks, according to Exceltur. Just before the referendum several countries, including Germany, France and the United States, warned their citizens to be careful if they traveled to Catalonia. Spanish airline Iberia and American Airlines allowed their passengers on flights to Barcelona to change their tickets for another destination if they wished for free. A cruise ship which was due to dock in Barcelona on Oct. 1, the day of the referendum, canceled its stop in the city, a spokeswoman for the port of Barcelona said. Another cruise ship delayed its stop in the city by a few days, she added. Barcelona is one of the most popular stops for cruise ships in Europe. More than 800 cruise ships dock in the city every year.

With Catalan President Carles Puigdemont threatening to declare independence following the referendum, the impact on the tourism sector is likely to continue in the coming months. Barcelona is a popular destination for French tourists when schools close for an annual holiday at the end of October but reservations for the period are down by 5-10 percent, a spokesman for travel firm eDreams Odigeo said. Reservations by all nationalities at hotels in Catalonia are down by around 20 percent until the end of the year, according to Exceltur. It predicts the drop could reach up to 30 percent if the crisis continues, which would cost Catalonia 1.8 billion euros ($2.1 billion) in lost revenues.

Tourism sector companies have also "seriously put the brakes" on all investments in Catalonia until the end of 2017, Exceltur Vice President Jose Luis Zoreda told a news conference yesterday. Tourism accounts for 12 percent of Catalonia's economic output and employs just over 400,000 people. Exceltur warned the crisis could have a "strong" effect on jobs if it continues.