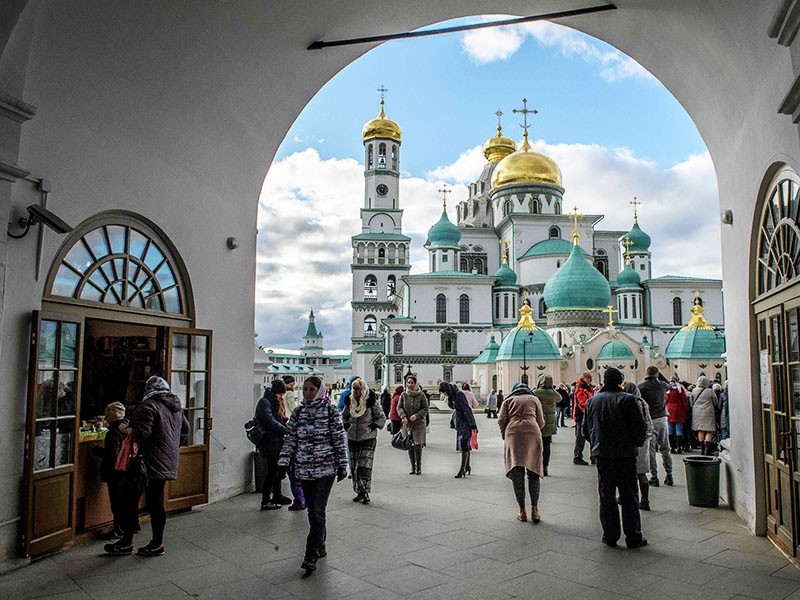 Visitors enter the New Jerusalem Orthodox Monastery near the town of Istra, 70 km outside Moscow (AFP Photo)
by Daily Sabah with AA Oct 22, 2017 12:00 am

"We are optimistic that efforts to provide visa liberalization to passport holders will soon be effective," Novak said during the 15th Term Meeting of the Russian-Turkish Intergovernmental Joint Economic Commission (KEK) in the city of Kazan in Russia's Tatarstan province.

The visa discussion accompanies motions to eliminate trade barriers between Russia and Turkey.

"Our trade volume has increased by 30 percent compared to the previous year, but even this figure is far below our potential," said Novak.

Necessary steps were taken to achieve the $100 billion trade volume set forth by the Turkish and Russian leaders, but more areas of partnership are possible, said Novak.

Novak cited energy and agricultural as sectors where trade should be liberalized, but also stressed that the business alliance between Turkey and Russia extends to "industry, textile and equipment production."

Following Turkey's downing a Russian Su-24 fighter jet for violating Turkey's airspace in November 2015, Russia imposed a range of unilateral sanctions on Turkey, including a ban on food imports, an end to visa-free travel and calls on tourists to not visit Turkey. The relations between the countries started to improve in mid-2016.

In July, the state-owned Petroleum Pipeline Company (BOTAŞ) reached an agreement on financing the Turkish Stream pipeline with the Russian state-owned gas and oil giant Gazprom. The 1,100-kilometer TurkStream project is slated to deliver 63 billion cubic meters of natural gas per year, with 16 billion cubic meters allocated for Turkey's domestic use.