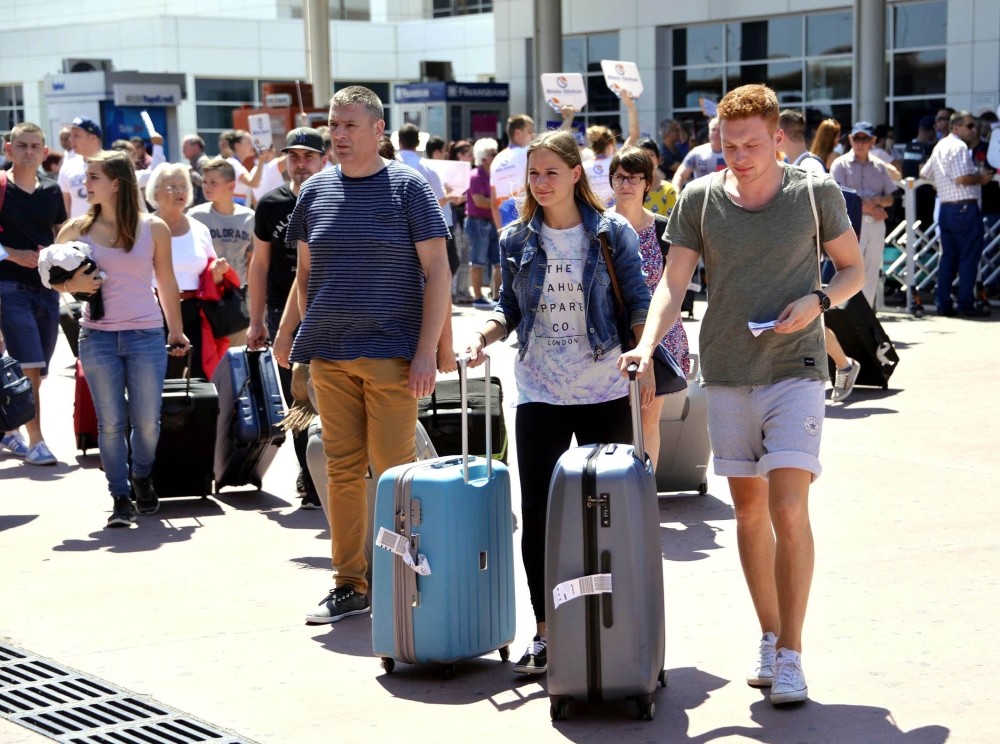 Even though Russian tourists go on vacation to many countries, Turkey remains the top destination for them due to the price and quality balance, the head of Russia's Federal Agency for Tourism said, adding that the number of Russians coming to the country will further increase in the last two months of the year

The head of Russia's Federal Agency for Tourism (Rosturizm) Oleg Safonov said that Turkey is leading the way among countries preferred by Russian holidaymakers. "They are also going on holiday to countries such as Greece, Spain and Thailand, but Turkey is always in the first place [they choose] for the harmony of price and quality," he added.

Safonov said they will ease the facilitation of visa procedures for more tourists to travel between Russia and Turkey.

Noting that Russia frequently met with its counterparts in Turkey and have reviewed the indicators, Oleg Safonov stated that the number of tourists coming from Russia to Turkey is at a very good level despite the bankruptcy of an airline company in 2017 and some difficulties they have faced.

Safonov pointed out that the tourist movement will continue from Russia to Turkey in the last two months of the year, adding that in 2018 the number of Russian tourists coming to Turkey will increase even further.

Safonov stressed that Turkey is a country that has gained a positive reputation among Russian tourists. "It is hard to give a certain number, but the tourists will come. Turkey leads the way among the countries preferred by Russian holidaymakers. They are also going on vacation to countries such as Greece, Spain and Thailand, but Turkey is always the first place they visit for the harmony of price and quality," he said. "Tourists like and prefer Turkey. Egypt ranks second after Turkey, but there are certain restrictions on visiting Egypt."

Safonov said that there are ongoing projects for the development of tourism relations between Russia and Turkey, adding that they are making structural decisions regarding certain organizations, addressing tourism security and taking precautions to prevent the spread of diseases. "We will provide facilities to mutually increase the number of tourists. We are also very interested in tourists coming to Russia from Turkey," Safonov said. "Turkey has been one of the top five countries in terms of the number of tourists coming to our country. We hope that we will catch the same figures in the coming periods."

Following Turkey's downing a Russian SU-24 fighter jet for violating Turkey's airspace in late November 2015, Russia imposed a range of unilateral sanctions on Turkey, including a ban on food imports, an end to visa-free travel and calls for tourists to stop visiting Turkey. Two weeks ago, Russian Energy Minister Aleksandr Novak said that Russia may reinstate its visa-free travel policy for Turkish citizens.

Meanwhile, often called Turkey's tourism capital, Antalya was visited by about 444,507 Russian tourists from Jan. 1 to Oct. 31 last year, but saw a 724 percent increase, with around 3.66 million Russians coming in the same period this year out of the nearly 9.5 million tourists who came to Antalya, according to the Antalya Airport Administrative Authority.

Russian tourists visiting the city in the said period constituted 63 percent of the total number of tourists.

In October, Antalya welcomed around 361,251 Russians, an increase of 96 percent when compared to the same month last year when around 183,000 Russian tourists arrived. Russian tourists constituted 36.7 percent of all tourists in October.

Previously, Erkan Yağcı, chairman of the Mediterranean Touristic Hoteliers Association (AKTOB), said Antalya will have welcomed about 4 million Russian tourists by the end of the year.

Yağcı also said this year's tourism season is better than last year's, stressing that they have achieved a growth rate of 60 percent when compared to last year in Antalya, exceeding the figures of 2016. Yağcı also added that this year's figures are closer to those of 2014-2015, the best years of tourism for the area.

Underlining that the Russian market makes up a huge part in this year's growth, Yağcı recalled that Russia had issued a flight ban on Turkey because of the jet downing crisis in November 2015, however, there was a busy inflow of Russian tourists this year, as well.

"We will have welcomed nearly 4 million Russian tourists in Antalya by the end of the year," Yağcı said, noting that this figure will be around 5 million for Turkey as a whole. Suggesting that the Russian market is looking up, Yağcı said: "2014 was the best year in the Russian market. We will exceed the 2014 figures in 2017. This is a pleasing development."