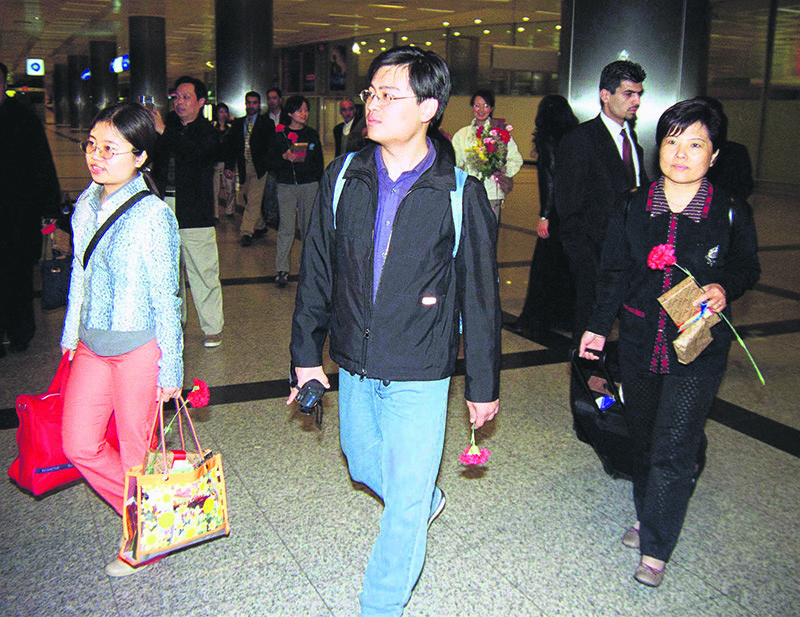 Declaring 2018 to be Turkish Tourism Year in China, Turkey has set a target to attract 1 million Chinese tourists next year, and to achieve this goal, increasing the number of flights to the country is essential

Abdulkadir Emin Önen, Turkey's new ambassador to Beijing, said more than 50 publicity projects were prepared by the Ministry of Culture and Tourism and a calendar of activities and events will be created throughout China, especially in major cities such as Beijing, Shanghai and Guangco, to promote Turkish Tourism Year in China.

Underlining that they want to introduce the cultural riches of Turkey, especially those appealing to the public, to Chinese people, Önen said they will bring the traditional Turkish shadow play Hacivat-Karagöz, the art of illumination and marbling in this regard, and bring Turkish masters specializing in marbling, a very important branch of art in China, to the country and introduce them to marbling masters there.

"We want to promote not just tourism products of Turkey, but also sectoral-based consumption products. For example, we will enter the kitchen of Chinese families by introducing outstanding Turkish delicacies from agriculture and food items," Önem said, stressing that they also plan to introduce pistachio, olive oil and dairy products to the people of this country with activities throughout the year.

Recalling that Turkey has expressed its goal to host 1 million Chinese tourists a year in the medium-term many times, Önen said Turkey's flag carrier Turkish Airlines (THY) needs to increase its destinations in China.

"Currently, there are direct flights only from Beijing, Shanghai, Guangzhou and Hong Kong. We are in talks with the relevant authorities in China to increase THY's frequency," he added. Önen said more than 100 million tourists travel abroad each year, suggesting that Chinese tourists have a quality profile that spends plenty of money wherever they go.

THY has 21 flights a week to Beijing Shanghai and Guangzhou and six flights to Hong Kong per week.

He noted that Chinese tourists prefer culture tourism instead of "sea, sand and sun" and that Turkey has serious advantages in this sense. "Turkey is an open-air museum. Chinese tourists admire Pamukkale, Konya and Cappadocia. They want to see archaeological destinations," Önen added. "There is Göbekli Tepe in Şanlıurfa with a history of 12,500 years. We need to introduce such places of interest effectively and accurately in China."

Ambassador Önen underlined that there are small Chinese cities called "Chinatown" all over the world, suggesting that smaller Chinatown concepts can also be designed to boost tourism in destinations, especially in Istanbul, that attract Chinese tourists to Turkey.

Moreover, Timur Bayındır, chairman of Turkish Hoteliers Association (TÜROB), said up to 300,000 people could come with the current flight capacity from China to Turkey. "The number of flights from China to Turkey must be increased. The target of 1 million Chinese tourists is an achievable figure as long as transportation facilities are provided," he said.

Bayındır said in his written statement that since 2018 was declared Turkey Tourism Year in China, the organization has accelerated their efforts, adding that there are aircraft problems related to the Chinese tourism market.

Noting that in China, which has a gigantic population of 1.3 billion, 122 million people go abroad and that Turkey cannot even get one-third of 1 million Chinese tourists allocated for the market share, Bayındır said even though a lot of Chinese people want to come to Turkey, only 300,000 people can come in a year with the current flight capacity.

Bayındır underlined that the number of flights from China to Turkey must be increased and that the Chinese government should provide new flights to Turkey.

He also recalled that Chinese airline companies started direct flights between Beijing and Athens, stressing that if these flights arrive in Turkey, the number of Chinese tourists increases.

"In our projects as TÜROB, we are trying to establish the links necessary for China Southern to start direct flights to Istanbul again, as in previous years. We hope that these flights will start again in 2018 and traffic will increase. Thus, Turkish Airlines will increase its flights to China in return." He added that it is also their immediate goal to pay high-level visits, meet with large Chinese companies and attract incentive groups to Istanbul.

Bayındır said after 2018 was declared Turkey Tourism Year in China, the Ministry of Culture and Tourism and the sector focused on promotion and marketing activities in this regard and said TÜROB will continue to participate in these activities with contacts they previously initiated.

Since all of his co-workers are aware of the importance of the market, Bayındır said two main points need to be resolved and the first of these is "increasing diplomatic relations, especially in the sense of security."

Bayındır pointed out that the state has provided the necessary initiatives in this regard, listing the second issue as transportation, that is, the aircraft problem. Suggesting that THY's flights to basic destinations such as Beijing, Shanghai and Guangzhou are an important opportunity, but not enough, Bayındır said expecting 1 million tourists from China will not be a reality, considering that this figure, which is limited by the number of seats and the number of flights, is not directly targeted for Turkey, adding that besides THY, Chinese airlines need to make quick attempts to arrange Istanbul flights.

He said Chinese tourists' reservation tendencies are 70 percent individual and 30 percent agency-oriented, and that the group that comes to Turkey is mostly group bookings that constitute the share of 30 percent. "So, the incoming groups are the Chinese who come within a certain program and flight possibilities and buy budget packages. We have to give the Chinese freedom of flight to reach our quota of 1 million and the Chinese tourists who spend money," Bayındır noted.

Number of Chinese tourists up by 40 pct