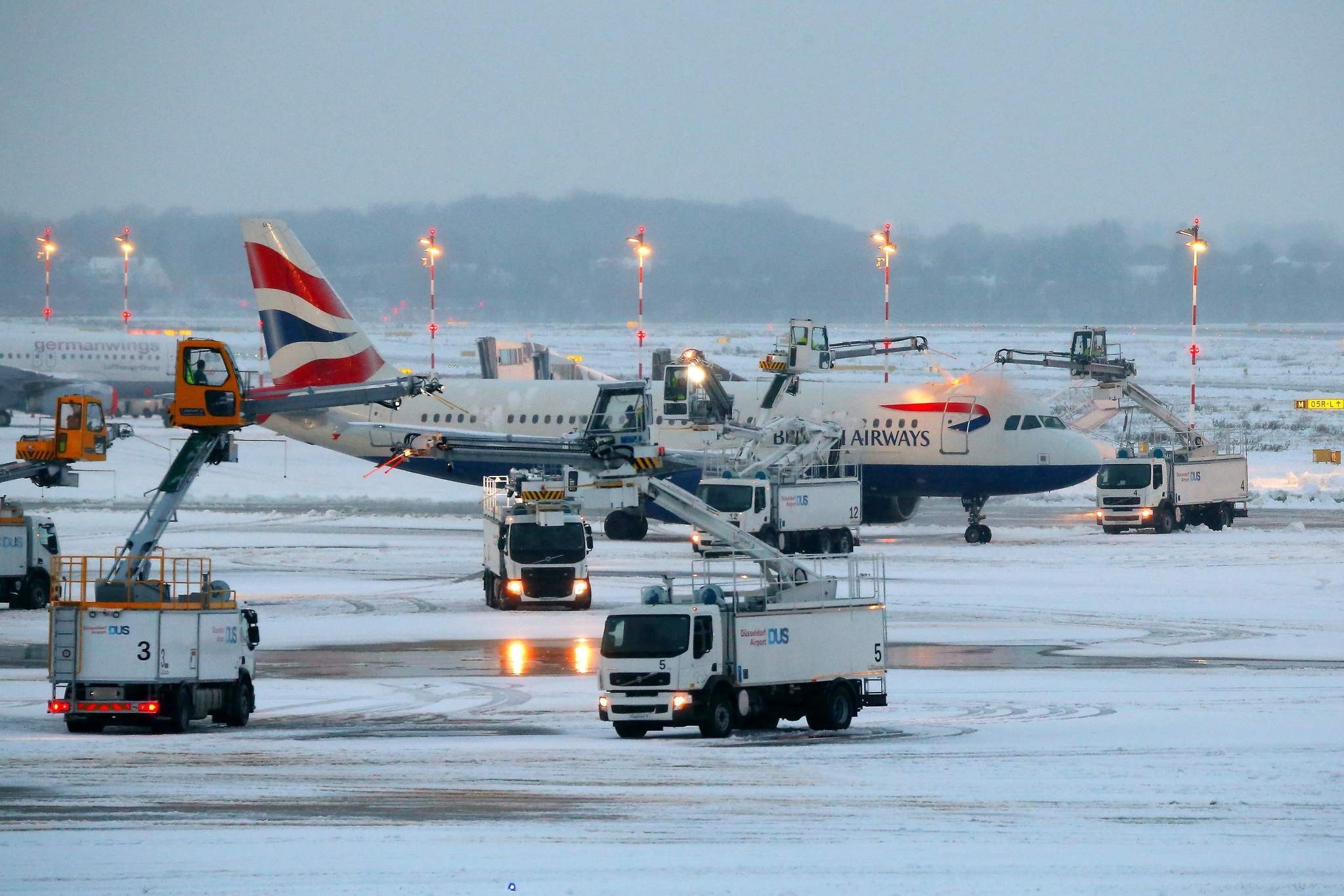 The heaviest snowfall in four years in Britain caused travel mayhem Sunday, while more than 300 flights were canceled in Germany's busiest airport and a ferry ran aground in the French port of Calais.

Hundreds of air passengers were stranded in Frankfurt, Germany's financial capital, as well as Britain, and many took to Twitter to complain.

Some 330 flights were canceled by 5:00 pm (1600 GMT) after heavy snow and sub-zero temperatures struck the region around Frankfurt, a spokesman for airport operator Fraport told AFP.

The airport -- Germany's largest air hub and the home base for major carrier Lufthansa -- had been scheduled to handle a total of 1,260 flights over the day.

Elsewhere in the country, Duesseldorf airport was forced to close for four hours during the afternoon, news agency DPA reported.

In Britain, Birmingham airport, serving the country's second biggest city, suspended flights for all of Sunday morning, as staff worked to clear the runway in heavy snow.

The airport typically handles around 30,000 passengers and 200 flights a day in December. It diverted 11 flights elsewhere and expected to cancel more than that, a spokeswoman said.

London's Luton Airport closed its runway for two hours before reopening around 1130 GMT to departing aircraft, according to a spokesman.

It had opened to incoming flights by early afternoon.

One frustrated traveler described the airport as "like a war zone."

Police forces in worst-hit Wales and central England urged motorists not to travel unless "absolutely necessary" as they dealt with surging calls.

A spokesman for the Highways England agency said there had been road incidents "all over the place."

The flurries continued to fall into the afternoon, threatening to block roads.

Swathes of Britain were hit by the snowfall, particularly in central and western regions, according to the country's official weather service.

Sennybridge, in Brecon Beacons National Park in Wales, topped the records with 30 cm, while Coleshill, close to Birmingham, received 10 cm, it reported.

Meanwhile, light snow and sleet fell through the morning in London, leaving Northolt, on the outskirts of the capital, with a covering of 2 cm, the Met Office said.

"We've gone through the worst of it," said Oli Claydon, a spokesman, in the early afternoon.

Most areas impacted would have a "bright, sunny start to Monday," he added.

Claydon said the last time Britain saw this much heavy snow nationwide was March, 2013, and during the winter of 2010.

In France, a ferry with more than 300 people on board ran aground in high winds in Calais, interrupting traffic in one of Europe's busiest passenger ports but causing no injuries.

A spokeswoman for the P&O shipping company said the ferry, The Pride of Kent, ran aground around noon after it hit a gangway while making to leave for Dover, its destination in Britain.

The ship was also transporting 74 lorries, a coach and 36 other vehicles.

Two tug boats pulled the ferry free, said an AFP correspondent at the scene, though winds gusting at up to 110 kilometers (70 miles) per hour made the task difficult.

In France, 32 departments were placed on orange alert with winds of more than 100 kilometers forecast in some areas.

In the northern Pas-de-Calais and Nord regions, some 20,000 homes were without electricity due to gale-force winds which affected supply, power provider Enedis said.

Heavy rain also led to the closure of two airports in the French Mediterranean island of Corsica, including the one serving the capital Ajaccio.