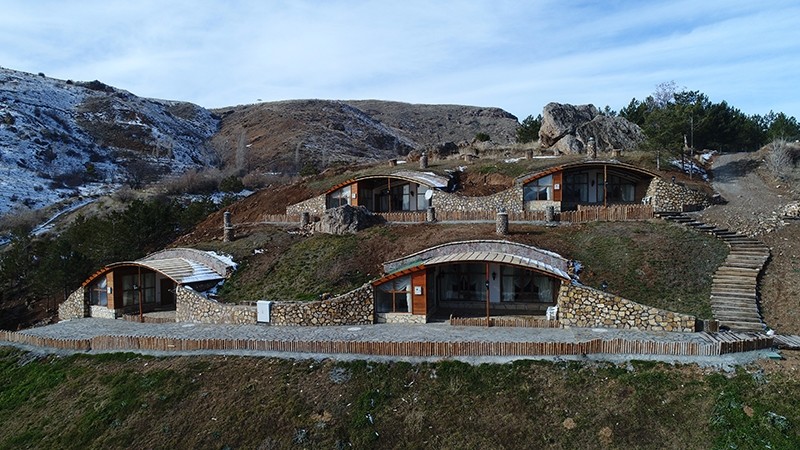 Earth-sheltered houses in the Central Anatolian province of Sivas are set to become a part of a holiday village to lure tourists from all over the world.

The Sivas Municipality is building more houses, inspired by the "Hobbit Houses" in the blockbuster "Lord of the Rings" and which received keen interest by domestic and foreign visitors. The new houses are currently under construction, as six current hobbit houses, which hosted tourists from European countries as well as Australia, China and Japan, have been insufficient in meeting demands.

Built in the Paşabahçe picnic area, the terraced houses cater to the needs of large families.

The one-bedroom abodes with fascinating architecture each have a kitchen, living room and a bathroom. Their daily price is 120 Turkish Liras.

Sivas Mayor Sami Aydın said the construction of the new hobbit houses have been continuing nonstop at the entrance of the Paşabahçe picnic area.

After landscape arrangements, he said, there would be a mesmerizing atmosphere in the village, while stressing that Paşabahçe was one of the most stunning picnic areas in the city.

The mayor said 70-square-meter houses were built on the slopes in order to boost tourism in the region, a secluded place and not a typical tourist destination.

Sivas authorities aim to increase the number of the hobbit houses to 50.

"We see there is high interest in the hobbit houses. We weren't expecting such huge interest at the start of the project. We initiated the project in order to make the city more popular. Now there is great interest from Turkish and foreign tourists. This encourages us to make additional works here," Aydın said.

Aydın said the cottages wooed tourists from countries in the Far East, too.

"We get demand from visitors from Australia and Singapore. Our goal is to turn this place into a holiday village. We also plan to hold various activities and set up concepts."

"I believe that in the near future this place will be preferred among holidaymakers because it is close to the city center and transportation is easy. You are in nature; you get to see different beauty at night and during the day," he said.

But the mayor said they were not able to plan tours since demand was not that high yet.