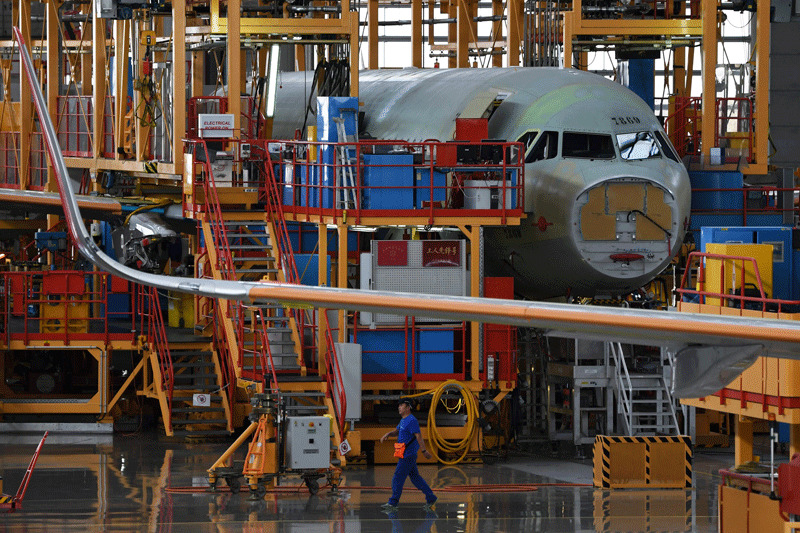 This file picture shows a worker walking past planes under construction at the Airbus A320 Family Final Assembly Line (AFP File Photo)
by Compiled from Wire Services Jan 10, 2018 12:00 am

French President Emmanuel Macron said China will order 184 Airbus A320 planes as he wrapped up his visit to Beijing, during which he called for "balance" in trade relations between the two countries.

The value of the deal was not immediately disclosed but under the company's list prices for the single-aisle planes, it could total at least $18 billion.

The order for the 184 planes from the A320 family "will be finalized shortly" and has been confirmed by Chinese President Xi Jinping, Macron told reporters on Wednesday, at the end of his three-day visit to China.

"The president reaffirmed his trust in Airbus, and the fact that China will maintain its orders' volume in the coming years and maintain the market ratio between Airbus and Boeing," Macron said.

Macron and Xi on Tuesday signed several memorandums of understanding for cooperation in areas such as aviation and nuclear energy.

As part of the agreements, Airbus will also increase the production of its A320 model at the Tianjin plant to six planes per month from four aircraft currently.

"This industrial ramp-up targets five aircraft by early 2019 and six per month by early 2020," a statement from the European plane manufacturer said.

The two presidents also agreed to collaborate in the fields of artificial intelligence, climate protection and counterterrorism. Macron said he would join Xi's plan to create a trillion-dollar trade and infrastructure network - the One Belt, One Road Initiative - across Asia and Europe.

Macron, however, called for "balanced cooperation" between the two countries and said he wanted to reduce France's 36-billion-dollar trade deficit with China.

Airbus had already announced on Tuesday an agreement to increase production of the A320 in China.

China is the world's second biggest aviation market, making it ripe for competition between Airbus and Boeing.

The U.S. aerospace giant estimates that China will need 7,240 commercial planes over the next 20 years.