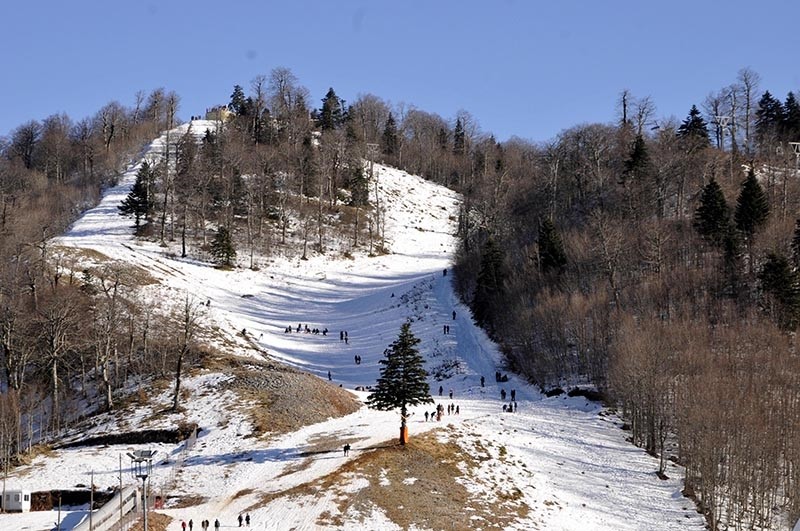 Turkey's ski resorts are going through difficult times as a result of warm weather and a lack of snowfall in the 2017 ski season, reports said Wednesday.

With no snowfall in most parts of the country, many ski resorts are left without visitors. For instance, Ergan Mountain Ski Resort in eastern Turkey's Erzincan province, which cost around 50 million liras ($13 million) to build and had high vacancy rates in 2017, is awaiting snow and skiers.

The General Manager of the Green Park Hotel Mehmet Zeki Ünal said that Kartepe, located in Turkey's Kocaeli province, had 250 cm of snowfall last year, but this year they only 18 cm. He noted that the ski tracks are currently closed and hotels are empty, and visitors are hoping for snowfall to come back.

While they had 80 percent occupancy rates last year, the number fell to 20 percent this year, forcing the hotel administration to opt for downsizing.

Located in Northwestern Turkey's Bursa province, famed Uludağ ski center, which previously used to receive 260 cm of snowfall, received only 88 cm of snow this year. The President of Southern Marmara Tourism and Hotel Management Association Mehmet Haluk said although there is snow on the tracks, it is limited compared to last year.

Last winter, almost all parts of Turkey enjoyed snowfall and people flocked to ski resorts throughout the country to enjoy winter sports. Even the southern resort town of Antalya received snowfall for the first time last year since 1993.