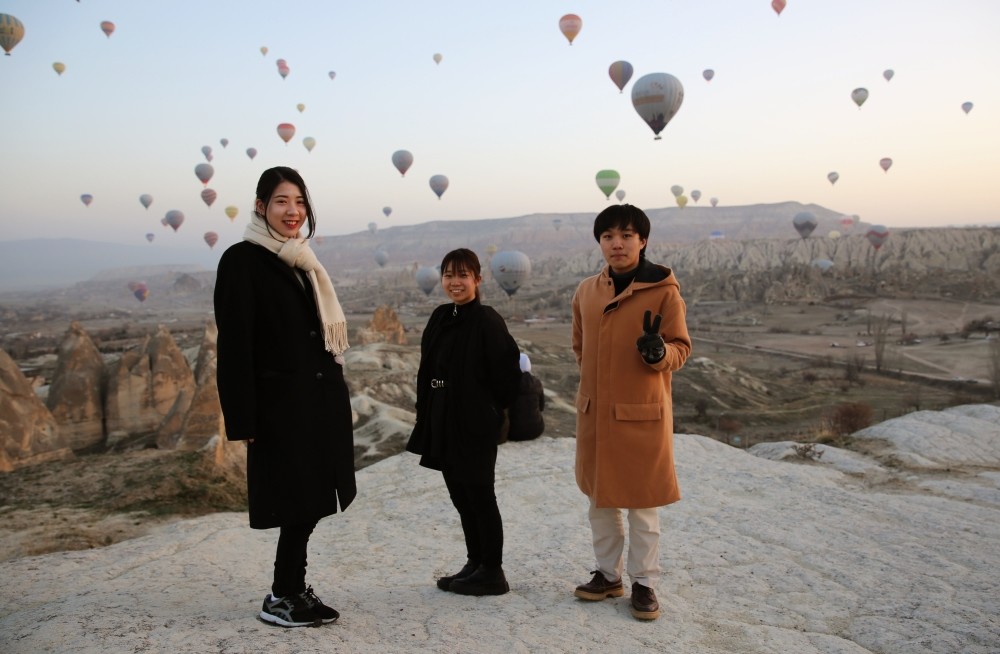 After China declared 2018 as "Turkey Tourism Year," Turkey's Cappadocia has initiated the "Chinadocia Destination Project" as a welcoming gesture to Chinese tourists.

As part of the project, posters and banners in Chinese were hung on the baskets of all the hot air balloons in Göreme municipality. A number of Chinese tourists took photographs with the banners after hot air balloon tours were canceled yesterday due to strong wind.

Speaking to the media at a balloon takeoff site, Nevşehir Governor İlhami Aktaş said they are carrying out the project in order to attract Chinese tourists to Cappadocia throughout the year.

"China is one of the biggest tourism markets in the world. We have launched the Chinadocia Destination Project' in order to attract more Chinese tourists to Cappadocia," Governor Aktaş said.

"Activities will be organized throughout the year both at home and abroad. We have started the project today and will strive to get a bigger share of Turkey's tourism revenue."

Ahiler Development Agency Secretary General Bekir Varol said after the declaration of 2018 as "Turkey Tourism Year" in China, "China Year" has also been declared in Cappadocia as a welcome gesture to Chinese tourists. He added that as part of the project, they will host various activities and campaigns to promote the region all through the year.

Varol said they were planning to organize a photo exhibition in China this year and added that the number of Chinese tourists coming to Turkey was expected to exceed last year's figures.

Zheng Chenyu, one of the Chinese tourists at the event, said he loved the scenic view, which he previously had seen in photos only.

"I love Turkey. The people are very hospitable. The natural rock formations and the scenery here are wonderful. I would recommend Turkey to everyone when I get back home," Chenyu said.

Another Chinese tourist Li Xue said he could not participate in the hot air balloon tour because of the weather conditions, but that he was also happy to have a walk among the fairy chimneys.

Cappadocia, one of Turkey's most important tourism centers with its fairy chimneys, valleys covered with natural rock formations, underground settlements and historic monasteries carved in rocks, is expecting a rise in the number of Chinese tourists this year.