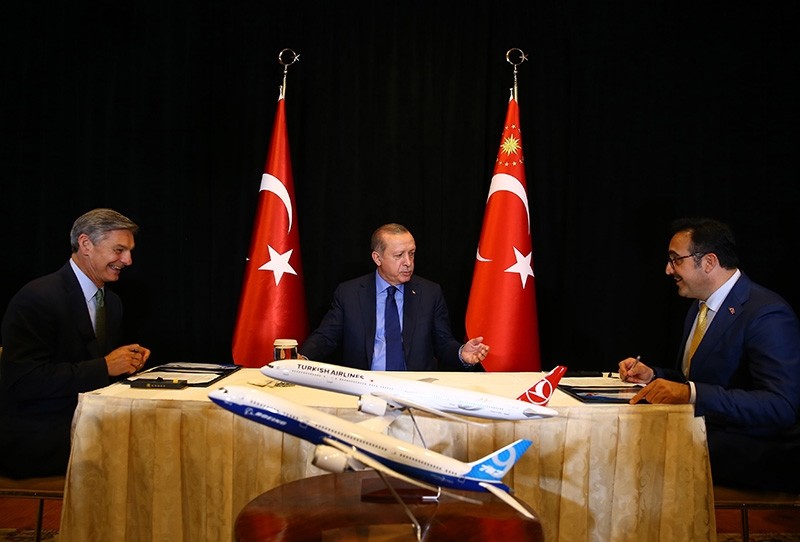 Continuously growing its operations over the years, Turkish Airlines will add a total of 60 new wide-body aircraft to its already young fleet in the next six years, which will further boost the competitive power of the ‘airline that flies to the most countries in the world’

Turkey's national flag carrier Turkish Airlines (THY) is set to fly from Istanbul New Airport, which will be officially opened on Oct. 29, with a new more dynamic structure. It announced on Friday that it will add a total of 60 new wide-body aircraft to its fleet in the next six years.

Turkish Airlines, which has the youngest fleet in the world with an average fleet age of 6.9 years, will further reiterate this title, while the increase in the number of aircraft will also boost the competitive power of the company.

In a statement regarding the issue, Turkish Airlines Chairman İlker Aycı recalled that they signed a preliminary memorandum of understanding with Boeing in New York in September with the support and participation of the President Recep Tayyip Erdoğan to purchase 787-9 Dreamliner, one of the world's most technologically advanced aircraft.

Likewise, Aycı said, a deal was signed with Airbus in Paris during President Erdoğan's official visit to France in January of this year to add A350-900 aircraft to the fleet of Turkish Airlines.

"The Boeing order, which we consider to be a very important venture to meet our need of wide-body aircraft at Istanbul New Airport, which will serve as our new hub once its construction process completed, is a big step that will further strengthen our fleet for 2023, the 100th year of our Republic, and bring the level of satisfaction of our passengers to even higher levels," said Aycı.

He also noted that the Boeing order will provide a great benefit not only to the Turkish Airlines but also to the Turkey's aviation sector.

"We are happy to believe that this great step will not only add a great momentum to the steady rise of our country's flag carrier, Turkish Airlines, but at the same time it will be very significant added value for Turkish Civil Aviation," the THY chairman added.

The number of flight destinations of Turkey's flag carrier has exceeded 300 with recently launched direct flights from Istanbul to Freetown, Sierra Leone.

The national carrier operates in 121 countries, more than any other airline in the world.

Turkish Airlines was recently ranked number one in the list of world's best full-service airlines, by eDreams – a prominent online travel agency operating in over 30 countries, offering passengers more than 150,000 flight routes from some 450 airlines.

In 2017, the total number of passengers carried by the airline reached 68.6 million, marking 9.3 percent hike compared to the previous year.

Turkish Airlines, which was established in 1933 with a fleet of five aircraft, currently boasts more than 330 aircraft including passenger and cargo planes.

In early January, President Recep Tayyip Erdoğan particularly cited the aim to make THY the airliner with the largest aircraft fleet in the world, with the opening of Istanbul New Airport, also known as the "third airport."

Once fully operational, Istanbul New Airport is set to become the world's largest, while it will strengthen Istanbul's position as a transfer hub and boost the Turkish economy with a nearly 4.9 percent contribution to the country's gross domestic product by 2025.

The airport will transform the whole of European airspace, operating direct flights to most of the countries in the continent.

Transportation, Maritime Affairs and Communications Minister Ahmet Arslan said around $10.2 billion was invested in the project and that it would generate around $22.2 billion in 25 years before value-added tax.

He also said the airport will be large enough for 114 planes to dock at the same time, adding that it would employ 225,000 people when fully operational and would serve 3,000 flights on a daily basis.