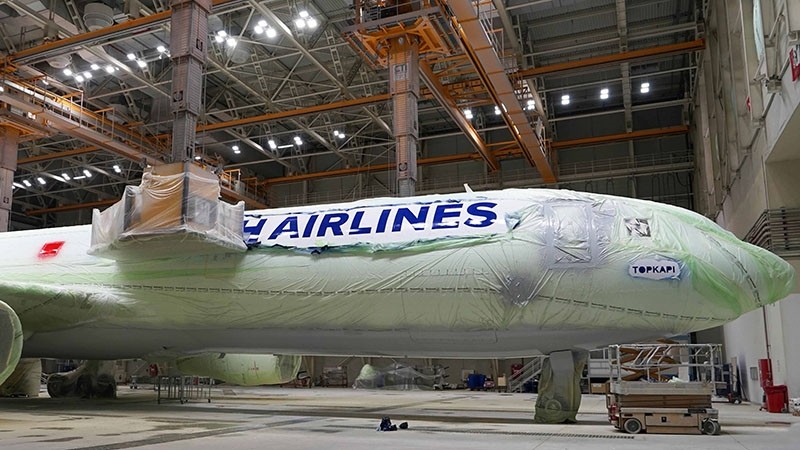 Turkey's national flag carrier Turkish Airlines (THY) opened its painting hangar for aviation enthusiasts to glimpse how its giant aircraft go through routine painting processes to protect hundreds of tons of metal soaring far above the clouds.

The work inside two 8,000-square-foot (227-square-meter) hangars is carried out by 40-person crews, according to a statement by the THY Press Office.

The painting process is completed in eight to 15 days for narrow-body and wide-body passenger aircraft.

For an airline that flies to 121 countries and 302 airports throughout the world, painting is one of the key processes of maintenance works for its fleet of 326 aircraft. The planes are subject to extreme climate conditions – both in the air, where temperatures fall below -50 degrees Celsius (-58° F), and on the ground, reaching up to 45 degrees Celsius (113° F) on bare concrete.

The undercoating clings well to the surface, protecting the plane's outer body against changes in temperatures and harmful solar rays.

Approximately 350 liters (92 gallons) of paint are used for a single aircraft, which remains on the plane for an average of five years.

In addition to painting services for its own aircraft, THY painting hangars also serve domestic and foreign airline companies, saving Turkey some $3 million in foreign currency.