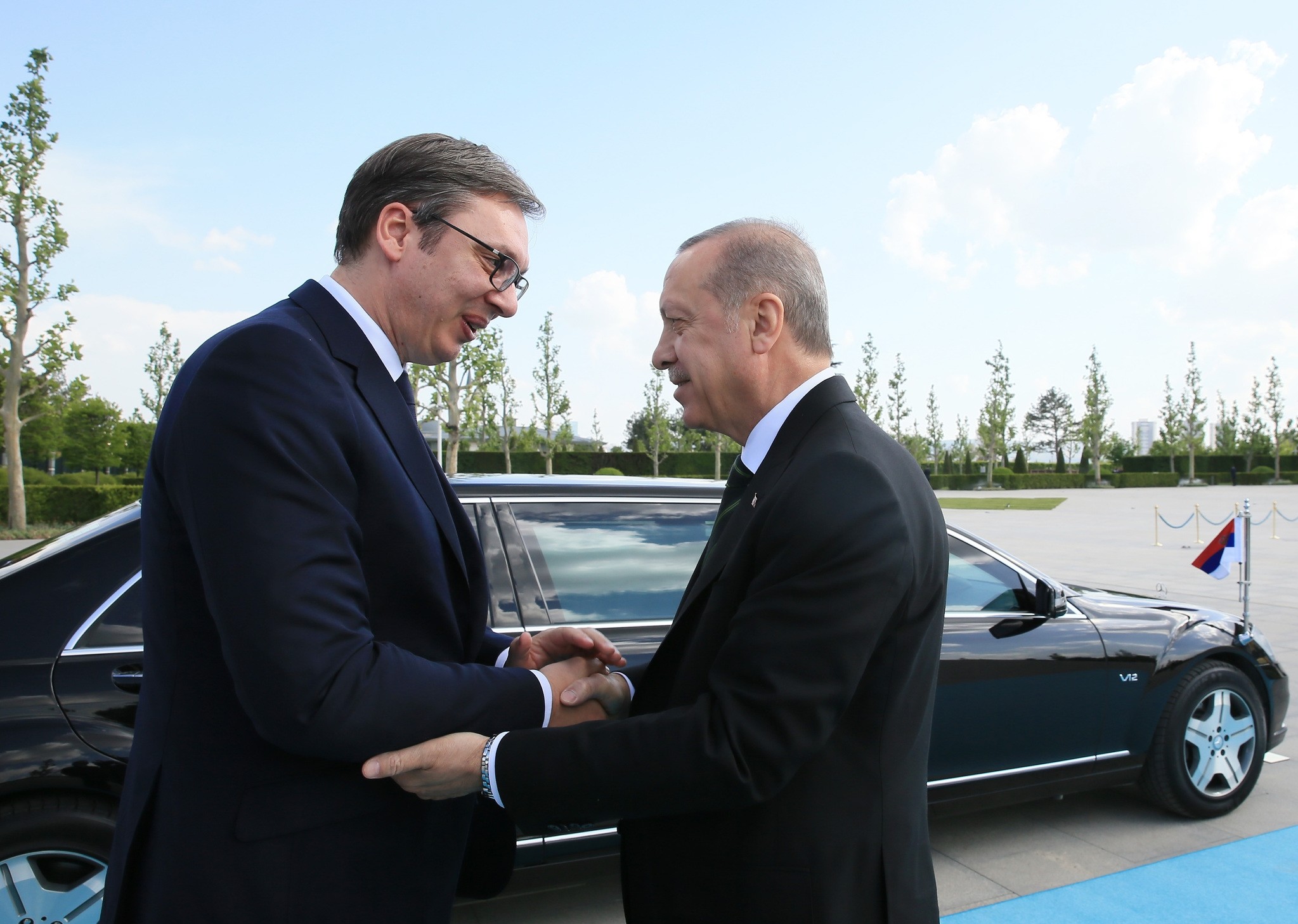 Looking to improve bilateral commercial and economic ties, Turkish and Serbian leaders gathered in Istanbul to exchange views on the ongoing and prospective joint initiatives in the infrastructure, transportation, agriculture and tourism sectors

With President Recep Tayyip Erdoğan and Serbian President Aleksandar Vucic in attendance, the Turkey-Serbia Business Forum in Istanbul on Sunday highlighted the two countries' joint initiatives to reinforce bilateral economic ties. Speaking at the forum, President Erdoğan underscored tourism as a key area of partnership. "With economic stability coupled with natural and historical beauties, both Turkey and Serbia can capitalize on tourism projects to cement their ties," he said.

"Particularly in terms of tours, Turkey and Serbia can launch joint projects. Last year, Turkey hosted some 150,000 Serbian tourists while around 100,000 Turkish people visited Serbia," he said, adding that the numbers could soar in the coming years with more joint investments in the sector.

Regarding investment and cooperation projects between Serbia and Turkey, Erdoğan said that infrastructure and transportation sectors also offered room for collaboration projects, as he drew attention to the Belgrade-Sarajevo Highway project.

"The Belgrade-Sarajevo Highway Project that will be realized with Turkey's contribution is a friendship project to strengthen commercial and economic relations in the region," Erdoğan said. He added that the relevant authorities were continuing their efforts to accomplish the project, which he said would boost peace in the region once complete.An agreement has been reached on the Sarajevo-Belgrade Highway project, planned to be built between Bosnia and Herzegovina's capital of Sarajevo and Serbia's capital of Belgrade with Turkey's support. The highway will be built on the two previously discussed routes. Set to connect Sarajevo and Belgrade via two different routes, the project is reported to cost around 1.8 billion euros.

The project is planned to be built by Turkish firms using domestic labor force through a build-operate-transfer model. The highway is expected to make a major contribution to the development of both economic relations and trade between the two countries, as well as to regional stability.

Ahead of Serbian President Vucic's visit to Turkey, Serbian Construction, Transportation and Infrastructure Minister Zorana Mihajlovic said that President Vucic's visit would be especially important for the Sarajevo-Belgrade Highway Project, as a memorandum of understanding (MoU) will be signed with Turkey's Transportation Ministry. Another agreement will be signed with Turkey's Taşyapı İnşaat to strengthen Serbia's infrastructure, Mihajlovic announced.

President Erdoğan also emphasized that Serbia offers great opportunities for investors with its strategic location at the very center of the Balkans and a favorable business climate. He said that Turkish companies' investments that create employment have increased exponentially. Noting that in the banking sector, Turkey's Halkbank is undertaking some great work in Serbia, Erdoğan said that during his visit to the country last year, they promised that Halkbank would go for a capital increase in Serbia and they have started to realize that promise.

The president informed that the first 20 million of a 40 million euro capital increase took place in February and the remaining will be done in the coming months. He added that Halkbank will reach around 90 million euros in capital and a size of more than 400 million euros in Serbia.

Pointing out Turkey as a steadily growing country, thanks to political stability and an environment of trust that have lasted for the last 16 years, Erdoğan said that they achieved an average growth rate of 5.8 percent between 2003 and 2017.

Last year, Turkey ranked first among the G20 countries and second among Organization for Economic Co-operation and Development (OECD) countries with a growth rate of 7.4 percent.

"Turkey ranks 17th in the world in terms of Gross National Product and 13th according to purchasing power parity. We increased our national income by nearly four times from $236 billion to $860 billion. Turkey received $195 billion of direct foreign capital inflow in the last 16 years," Erdoğan said, highlighting that exports rose from $36 billion in 2002 to over $157 billion last year, while exports rose above $160 billion at the end of April.

"Our goal on the 100th anniversary of the Republic of Turkey is to raise this figure to $500 billion," Erdoğan said, adding that this year the amount of public and private sector investments exceeded TL 1 trillion ($234.57 billion) for the first time in its history, which corresponds to an increase of about four times compared to 2002.

Erdoğan said that after the elections on June 24, the investment moves will continue to accelerate thanks to the opportunities provided by the new government system. He added that they will make more effective decisions under the presidential system, which will be fully effective after June 24, and apply them without being exposed to obstacles created by bureaucratic tutelage.

In his speech at the Turkey-Serbia Business Forum, Serbian President Vucic underscored the jobs created by Turkish factories in his country.

"President Erdoğan encouraging Turkish businesspeople to invest in Serbia is very important for us," he said.

The Serbian president informed that the Turkish-Serbian cooperation in textile, agriculture and good sectors has been very productive.

On a similar note with Erdoğan, Vucic also pointed out the possibilities for joint projects in the tourism sector, since Turkey hosts many Serbians every year. He also informed that Turkish tourists have recently topped the number of visitors in Belgrade.

Turkey and Serbia are scheduled to hold their first High-Level Cooperation Council meeting Monday evening. The council mechanism, Erdoğan said will enable "fast evaluation and decision-making in areas of cooperation," citing the strong joint will of Turkey and Serbia to reinforce political, economic and cultural ties.

The two countries also aim to increase the bilateral trade volume to $3 billion as they consider the council and the free trade agreement, signed in 2010, as important steps toward that goal.