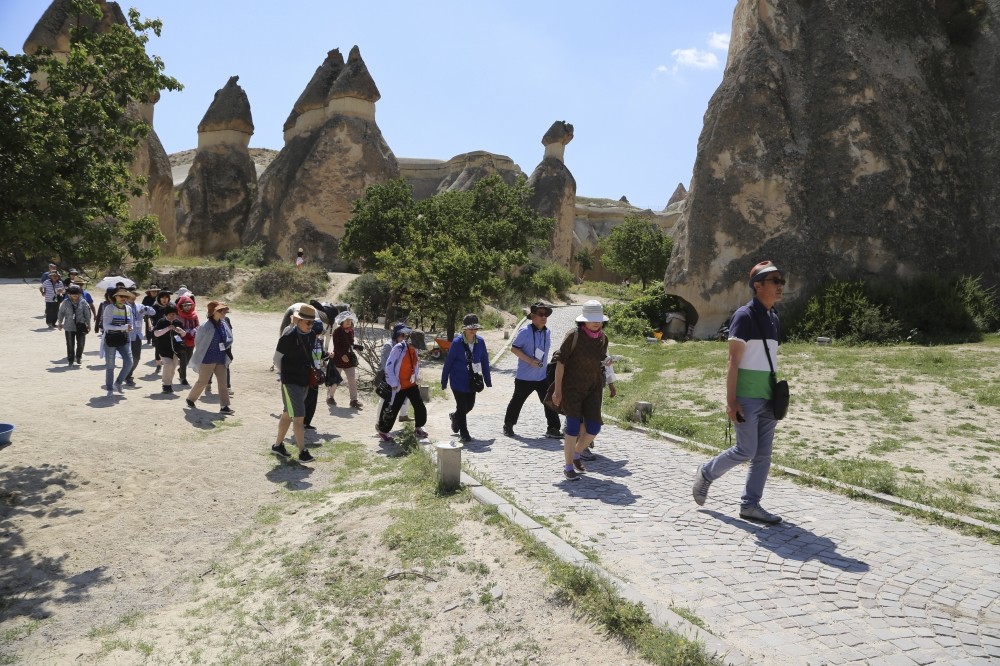 China's declaration of 2018 as "Turkey Tourism Year" is finally showing its effects, as thousands of tourists from the country flocked to central Turkey's Cappadocia, known for its historical and cultural riches. Known for its unique fairy chimneys, valleys covered with natural rock formations, historical monasteries carved in rocks and underground cities, Cappadocia attracted more than 250,000 Chinese tourists in 2017, aiming to draw 500,000 this year.

Jiang Hong Ying from Guiyang, China told Anadolu Agency (AA) that they came to the region to take an advantage of the "Turkey Tourism Year."

Noting Cappadocia's unique natural sites, Hong Ying said: "I decided to come to Turkey after it was recommended by our president. I am very happy to have come here and seen this place. The view here is amazing."

Liu Dan, from Changsha, China, said she wanted to come to Cappadocia for a long time and was happy to be finally here.

"Cappadocia is quite famous in my city. It is a privilege to be here. I saw pictures of this place on the internet. Cappadocia's natural structure and fairy chimneys are quite interesting. I really do not know how they were formed, but I can say that they are perfect," she said. Another Chinese tourist, Li Jia said: "I got to know about Cappadocia from TV series, movies and documentaries. But exploring the region firsthand is even more special."

Jia said he wants to come back to Cappadocia again. "I will definitely recommend this place to my friends in China. I wanted to come to Turkey for a long time. I came to Cappadocia after Istanbul and Antalya. The rocks and fairy chimneys in this place surprised me," he said.

"There is a place like this in China, but Cappadocia's view is spread over a much wider area and much more beautiful. I traveled to various places with my friends. I admire Cappadocia, I want to come back here in the future," he added.

"When I go back to my country, I will tell my friends about the beauty of this place. I would like to tell everyone that they must see this place at least once in their lifetime because there is no other place that is this beautiful and interesting."

Culture and Tourism Minister Numan Kurtulmuş earlier said more than 250,000 Chinese tourists visited Turkey in 2017. That number is expected to reach 500,000 in 2018.

Turkey welcomed around 5.1 million tourists in the first three months of this year - an all-time high - with an increase of around 35-36 percent compared to the same period of the previous year.

The country's tourism revenue rose by more than 18.9 percent in 2017 as it hit $26.3 billion from $22.1 billion in the previous year, according to the Turkish Statistical Institute (TurkStat).