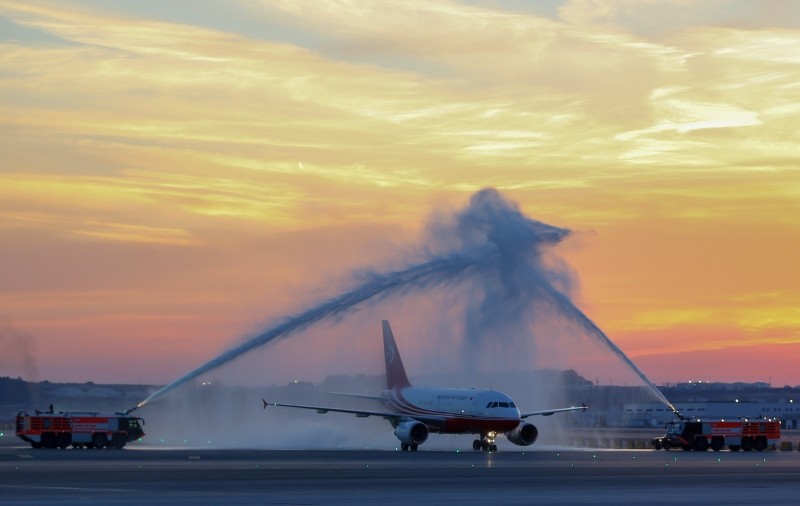 President Recep Tayyip Erdoğan's plane has made the first ever landing Thursday at Istanbul's colossal new airport, which is expected to formally open to air traffic on Oct. 29.

The Turkish presidential aircraft TC-TUR took off after Erdoğan's election rally in the southeastern province of Gaziantep and made the historic landing on the 3,750-meter-long and 60-meter-wide runway.

The official inauguration ceremony of the Istanbul New Airport, which is set to become the world's largest once opened, is scheduled for Oct. 29, 2018.

Transportation, Maritime Affairs and Communication Minister Ahmet Arslan said recently that Istanbul is set to be the world's logistics hub in addition to its central role in passenger traffic with the inauguration of the new airport.

The first stage of the new airport, which has taken 42 months to complete, will serve 90 million passengers annually. It will accommodate 3,500 take-offs and landings per day.

Moreover, the airport will have 100,000 square meters of living space, a 25,000-capacity parking area, 143 boarding bridges, a 42-kilometer baggage system and cargo capacity for 5.5 million tons of freight.

Arslan said the new airport will generate TL 73 billion ($15.35 billion) for the Turkish economy and create more than 225,000 jobs.

He underscored that as air cargo continues to improve around the world and in Turkey, Istanbul will be a center for passenger transportation as well as air cargo operations.

The new airport project was launched to make up for the lack of capacity in Istanbul's existing airports. It will be the third international airport built in Istanbul after Atatürk International Airport and Sabiha Gökçen Airport.