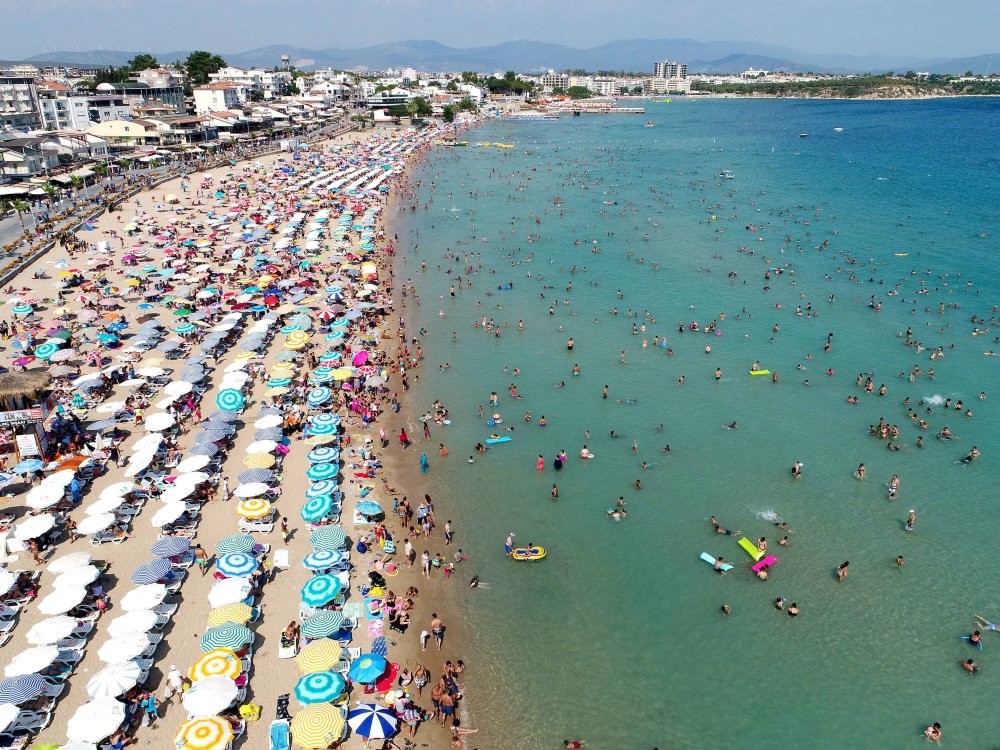 Enjoying their stay in Turkey, foreign tourists praised the country's nature, people, food and service, adding that the it is an ideal place for holiday

"The atmosphere in the Aegean is wonderful, the people are wonderful. It's very pleasant here. Turks are sincere and friendly," said Liam Connor, a British tourist, on Saturday.

"They have to come and see the beauty in Turkey. The service at hotels is great," he added.

Didim hosts hundreds of thousands of domestic and foreign tourists with its famous 1,600-meter beach and cultural attractions, including the ancient city of Miletus and Temple of Apollo.

Didim is known locally as "Little England" as many Brits buy houses and stay in the town permanently. Some half a million people visit Didim every summer, including one-day trips.

Tourists at all-inclusive or boutique hotels enjoy fun holidays thanks to the town's nature and beautiful sea and the local hospitality.

Praising Turkey's weather, people and food from past visits to Kuşadasi and Bodrum, he said: "I like Turkey a lot. These are perfect places, almost like a little piece of heaven."

Meanwhile, Turkey has hosted 11.8 million tourists in the first five months of 2018, a new all-time high, Culture and Tourism Minister Numan Kurtulmuş announced Friday. "Tourist numbers are up over 30 percent compared to the same period of 2017. This is an all-time high. At the end of 2018, we will hopefully break a new record by hosting 40 million tourists and earning $32 billion," the minister said.

"This is my first time here and I really loved it," said Trudie White, an American tourist.

She said she had been to Cyprus before, and that she was very curious about Turkey. "Good thing that I came and that I am here. Turkey is a wonderful country. Fabulous nature, wonderful people. I will definitely come again."

Stephen Cross, a British tourist, said he had been coming to Turkey for holiday for seven years, noting that the country was an ideal place for holiday.

"Do not think of anything negative about this country. There can be similar situations all over the world. Enjoy your holiday in Turkey," he said.

Emphasizing that they expect a serious boost in tourism in the 2019 to 2020 season, Cengiz said: "No matter how much negative perception the European media create regarding Turkey, tourists that come here see the truth. Tourism should not be looked at as a place where people just come to travel and see. We currently have a competitive environment in the real sense.

Especially in the Mediterranean belt, countries beyond us are competing to attract more tourists and get a bigger share of this cake. The tourists coming to Turkey see the truth."

After seeing a sharp decline in the number of visitors to Turkey for tourism in 2016, a year that included a series of terrorist attacks and a failed coup attempt, the tourism industry saw a recovery in 2017.

It experienced a drop in the number of tourists that began with a Daesh suicide bombing that killed 12 German citizens and injured 16 others in Istanbul's Sultanahmet area in 2016.

Turkey has been fighting not only against terrorism but has also been subjected to an anti-Turkey smear campaign carried out by Western media.

The Turkish government had set a figure of 40 million tourists as a target for 2018, Kurtulmuş had said, adding that the figures they obtained show that they will exceed the said target. "We will have an opportunity to revise our 2023 targets of 50 million tourists and $50 billion."

Turkey also saw an all-time high in the number of tourists coming to the country in the first quarter as it welcomed around 5.1 million tourists, which corresponded to an increase of about 35 to 36 percent compared to the same period of the previous year.

While the country hosted 36.8 million foreign tourists in 2014 and 36.3 million in 2015, the figure fell sharply to 25.3 million in 2016 but rose again to 32.4 million last year, according to the Turkish Statistical Institute (TurkStat).