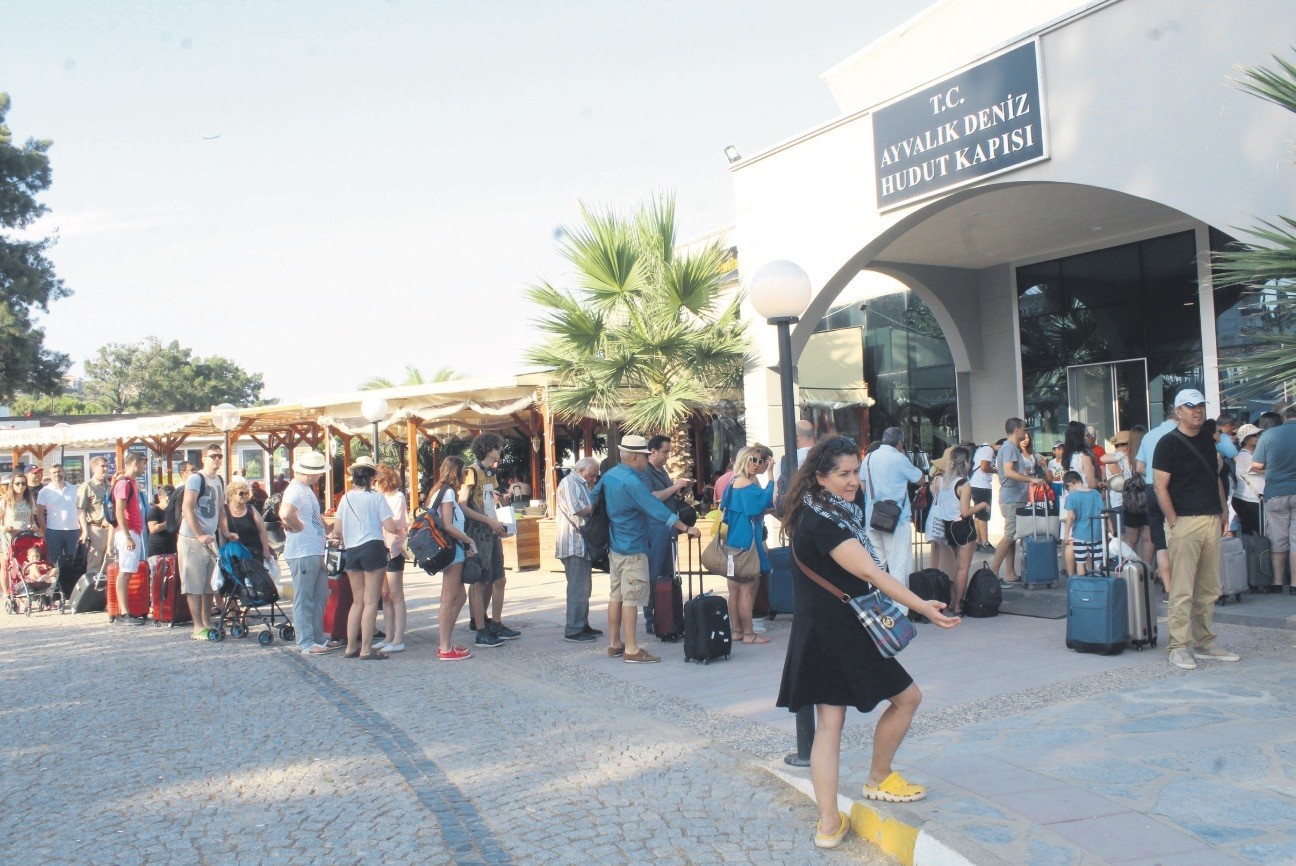 Turkey's Aegean coasts have become a "local market" for citizens of the neighboring Greek islands. While transit from Turkey to Greece has decreased with the appreciation of the euro, the arrival of Greek tourists to Turkey has increased.

The euro, which gained around 7.34 in value against the Turkish lira since the beginning of May, has increased the number of Greek tourists on the Aegean coasts by 40 percent in May. The Greeks, who come more for shopping rather than holiday, fill their bags from the district bazaars on the Aegean coasts. The Greeks, who mainly engage in weekly shopping for the kitchen, are purchasing goods such as a closet, construction material such as ceramics and furniture, as well as clothes. Greeks, who come for a one-day excursion, pay an average of 20 euros for the ferry.

Turkey's western province of İzmir has hosted around 4,367 Greek tourists in May last year, while around 6,121 Greeks came to the province in the same month this year, up 40.2 percent year-on-year.

NUMBER OF GREEKS COMING TO SEFERİHİSAR UP 20 PERCENT

With an increase in the frequency of ferry trips during the summer season and an appreciation of euro, Greek tourists have flocked to İzmir's Seferihisar district and Aegean province Balıkesir's Ayvalık district in May.

Ferries between Seferihisar Sığacık Teos Marina and Samos Karlovassi Ports on the Greek island of Samos, service initiated jointly by Seferihisar Municipality, Tursem Tourism-Samos Star, Teos Marina and Samos businessmen, are offering an opportunity to Greeks to visit the district en masse, while before it was Turkish tourists who swarmed the Greek islands for daily excursions. According to the information provided by a Tursem Turizm official, the number of Greek citizens that arrived in Seferihisar increased by 20 percent in May compared to April.

Serpil Aydın, a tradeswoman from Seferishisar, said Greeks showed an interest in the Sığacık village market and that there was also an interest by the neighbors in the region on the days when the market was not set up.

"They are doing food and clothing shopping. We are cheaper than the Greek mainland and the Aegean district bazaars are full of beautiful organic herbs and vegetables. The cultures are very similar, as well as tastes and shopping options," Aydın noted. Ömer Kaya, who sells organic village products in Seferihisar, said, "Alongside vegetables and fruits, they also buy some out of a thousand kinds of our famous Aegean jams."

The most frequent transit is from the Greek island of Lesvos, referred to as Midilli in Turkey, to Ayvalık. The trip from between Midilli, one of the most crowded Greek islands, and Ayvalık lasts around 45 minutes. Gökhan Nacar, a tradesman from Ayvalık, noted that the Greek citizens have increased their shopping trips to Ayvalık in the recent period due to the proximity.

"We now estimate that they are doing their weekly kitchen shopping from our markets. They can fill their weekly shopping market nets for 15 euros, why shouldn't they come," said Nacar.

Fatih Jale, a ferry operator in Ayvalık, noted that the number of tourists coming from Midilli to Ayvalık increased in May and that the people of Midilli who wanted to supply all their shopping from Ayvalık started to fill the ferries.

Jale informed that more than 400 Greek tourists recently arrived at the district bazaar in Ayvalik, which is set up in the Aegean district every Thursday.

"They returned to their homes on the evening cruise with full shopping bags in their hands. Nowadays, they mostly shop for construction materials such as steel door, ceramics, kitchen cabinets, wardrobes and furniture. They mostly prefer clothing goods," he added.

Informing that Greek tourists come more for shopping rather than touristic purposes and that they come on daily visits, Turkish Hoteliers' Federation (TÜROFED) vice chairman and Aegean Tourist Businesses and Accommodation Association (ETİK) Chairman Mehmet İşler noted that there was an increase in the arrivals in the recent period.

İşler also said that when there was a contraction in Turkey's tourism, Greek islands began to receive a significant number of tourists, which led to a contraction in the stocks of basic needs such as food.

"The connection and transportation between them via their own land is a bit more difficult. Turkey is both close to them and is gradually getting cheaper for them. It is easier to shop here," he added.

Remarking that Greek citizens meet their individual needs from Aegean coasts, İşler said they especially purchase basic food products such as fruits and vegetables, as well as cigarettes and medicine from pharmacies since they are to be cheaper in Turkey. He also noted that they also come to purchase construction products, closets and household goods well as furniture. "They are able to pass the vegetables and fruits they put in their bazaar bags. There is a mutual non-written good faith understanding at customs. There are no objections regarding individual needs. They cannot take 20 closets, but they are allowed to take one," he said.