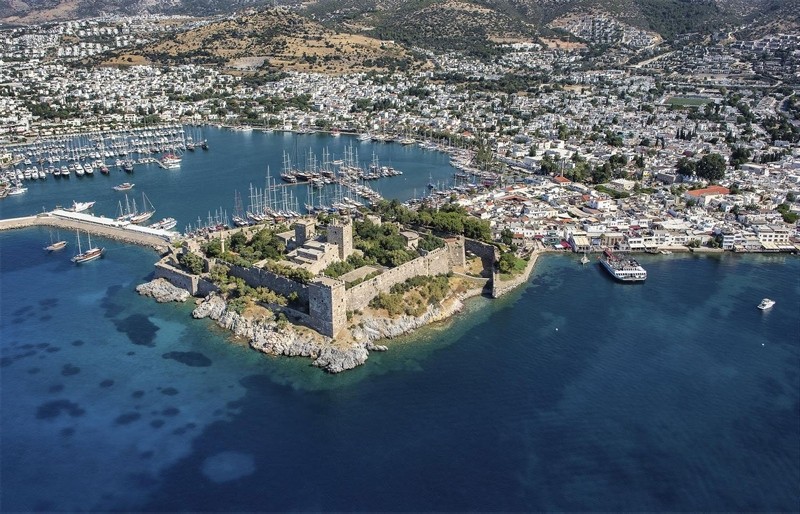 The number of tourists coming to Turkey's southwestern Muğla's Bodrum district has gone up by 34 percent to 550,000 in the first six months of this year, up from 410,000 in the same period last year, Turkey Tourism Investors Association (TTYD) Vice Chairman Recai Çakır said Thursday.

Foreigners make up 80 percent of the visitors to the town, which is renowned for its cultural riches and unique natural beauty and dubbed the Turkish Riviera, said Çakır. "European tourists have returned to Bodrum," he added.

Hotel occupancy rates in the town currently stand at 85 percent, up from 70-75 percent in the same period last year, while the figure is expected to go up to 100 percent after July 15, Çakır noted, adding that the interest in the town was extremely high. He also said the town expects to welcome around 1.1 million tourists throughout the year.

"European tourists have returned to Bodrum. There was an influx of European tourists to the region since the very beginning of the summer. There is a significant number of tourists coming from the U.K., Netherlands, Belgium and other Western European countries as well as from Eastern European countries such as Poland, Bulgaria and Romania. Besides, there are also masses of tourists coming from Iran and Georgia," said Çakır.

Çakır said that there were 44 five-star hotels worth $5 billion currently in the town. Twelve of these hotels are from global luxury hotel chains.

Bodrum's touristic allure is not only due to its pristine beaches, according to Çakır, as foreign tourists also prefer to come to the town because it offers an atmosphere of luxury and privilege to those who visit.

Recalling that 2017 was a year of recovery in the tourism industry, Çakır said they will recover their losses in 2018, and will reach their targets next year.

Indicating that the number of European tourists in Bodrum had declined in recent years, Çakır said the town saw a significant increase in arrivals especially from Germany, France, U.K., Belgium and the Netherlands this year.

TTYD vice chairman also said that besides European and Russian tourists, tourists from many Commonwealth of Independent States (CIS) countries such as Azerbaijan, Belarus, Armenia, Kazakhstan, Kyrgyzstan, Moldova, Uzbekistan, Russia and Tajikistan have also begun to prefer Bodrum as their holiday destination, adding that tourists from these countries that go to Europe cannot find the same prices and quality like they do in Turkey.

The town also features lots of high-end shops, restaurants and nightclubs and a fancy marina that allows wealthy tourists to arrive in Bodrum by yacht.

With many local and foreign businesses making investments in Bodrum year after year, Çakır expects Bodrum to increase its popularity worldwide. "It will be Turkey's St. Tropez," he said.