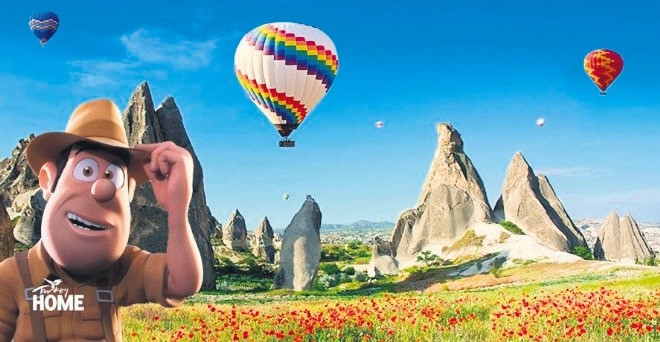 Thanks to the Spanish animated film "Tadeo Jones 2: El secreto del Rey Midas" (Tad the Lost Explorer and the Secret of King Midas), there has been a significant increase in the number of Spanish and European tourists coming to Turkey's historically coveted Cappadocia.

Cappadocia's 23-minute, 13-second screen time in the film following the initiatives of the Culture and Tourism Ministry led to a significant increase in the number of Spanish and European tourists visiting Turkey.

Following the animated film watched by 3.5 million moviegoers in Spain alone, a 64 percent increase was experienced in the number of Spanish tourists coming to Turkey, Turkish daily Hürriyet reports.

After the film's release in Spain and 26 other countries in August 2017, Spanish tourists coming to the country increased by 64 percent compared to June last year and by 66 percent in comparison to the first half of 2017. It was reported that the film compensated for the two-year loss in the number of Spanish tourists.

The film met with 3.5 million viewers in theaters in Spain, making 17.9 million euros in box office.

Listed as the highest-grossing film in Spain in 2017, it was also named "Best Animation Film" (Mejor Película de Animación) at the 32nd Goya Cinema Awards.

Both the number of tourists and tourism revenue are increasing this year in tourism. Foreign tourist arrivals in the first six months increased by 30 percent compared to the same period of the previous year, reaching around 16 million.

In the same period, the number of Gastarbeiter (guest workers) visiting Turkey rose by 21 percent to 2.9 million, totaling 18.9 million tourists. Tourism revenue in the first six months of the year rose from $8.7 billion to $11.4 billion.

According to the Turkish Statistical Institute (TurkStat), the average expenditure per foreign visitor during the first six months of the year was $629, while this figure stood at $877 for the guest workers. Meanwhile, the average per capita spending was $667 in this period.

Ersoy said that the number of people is no longer the primary target, adding that increasing the percentage of tourism revenues in the gross national product (GNP) from 4 percent to 8 percent was set as the new target.

According to national statistical body, the GNP is around $882.7 in dollar terms, while tourism revenues will reach $70 billion if the share of tourism is raised from 4 percent to 8 percent.