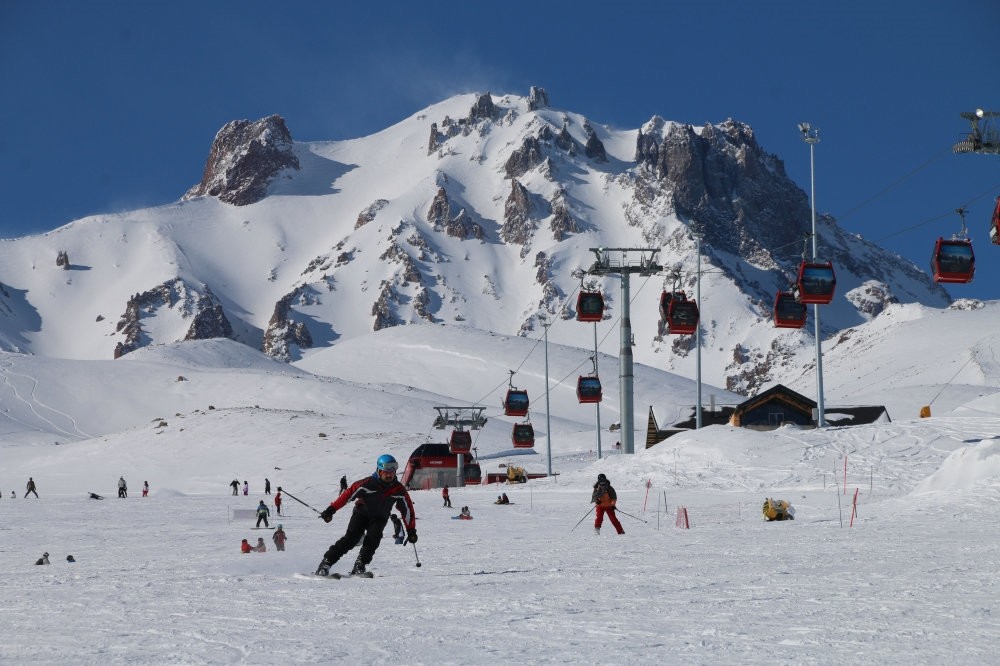 The latest bookings suggest that the occupancy rate at ski resorts in Turkey will reach up to 90-100 percent during the New Year's holiday.
by Daily Sabah with AA Dec 15, 2018 12:00 am

As plenty of fresh snow covers the most popular ski resorts across Turkey, including Uludağ, Palandöken, Erciyes, Kartepe and Ilgaz, hotel bookings for the new year have surged over 90 percent.

Tourism experts and operators are pleased with the high demand and the associated dynamism and foresee a good winter season ahead.

Turkish Travel Agencies Union (TÜRSAB) Vice Chairman Hasan Erdem said that early bookings for ski resorts were welcomed by the owners of tourism agencies and facilities. He noted that Turkish ski centers have a capacity of about 20,000 beds, including 16,000 approved by the Tourism Ministry.

He said that there is a huge potential and early bookings have led to a 70 percent occupancy rate at all ski resorts. The occupancy rate will be up to 90-100 percent during the New Year's holiday as shown by bookings, Erdem said. "This is a great occupancy rate for the tourism sector of our country. We hope that this will be continuous."

Erdem added that in the past, tourists from Gulf countries like Kuwait, Bahrain, Qatar, Oman, the United Arab Emirates and Saudi Arabia, used to prefer Turkey only during summer. "In recent years, however, Turkey has come to be preferred during winter, Christmas, semester holidays and other holidays by tourists coming from these countries. This is very pleasing," he said.

He stressed that they want to keep the tourism sector dynamic throughout the year. He noted that they have been carrying out infrastructure works to avoid income sources becoming bound to certain seasons.

Erdem said that there are really high demands from those countries at the end of December. "That makes us happy. I hope it will increase even more. Uludağ is preferred by both local and international tourists. There are also tourists from the Gulf countries who prefer Uludağ."

TÜRSAB Southern Marmara Branch President Murat Saraçoğlu said that Uludağ is one of the foremost winter and ski resorts in Turkey, with 18 hotels and a capacity of nearly 7,000 beds.

He underlined that Uludağ is a winter tourism center which has become a brand in and outside Turkey. "Preparations for this year are complete. Some of the hotels are currently open. The season starts as of Dec. 14 [today]. Most of the hotels will open over the weekend."

Pointing out that bookings are going pretty well, he said that as the snowfall continues, it will bring the ski tracks to the appropriate level for skiing.

"We expect that hotels will be full during the New Year holiday. Currently, reservations are still in progress. It will be easy to find an empty room in Uludağ on Christmas. Likewise, the intensity will continue during the semester break. We think that occupancy rates will be very high until the end of the season," he added.