A prehistoric treasure Göbeklitepe to mark Turkish tourism in 2019 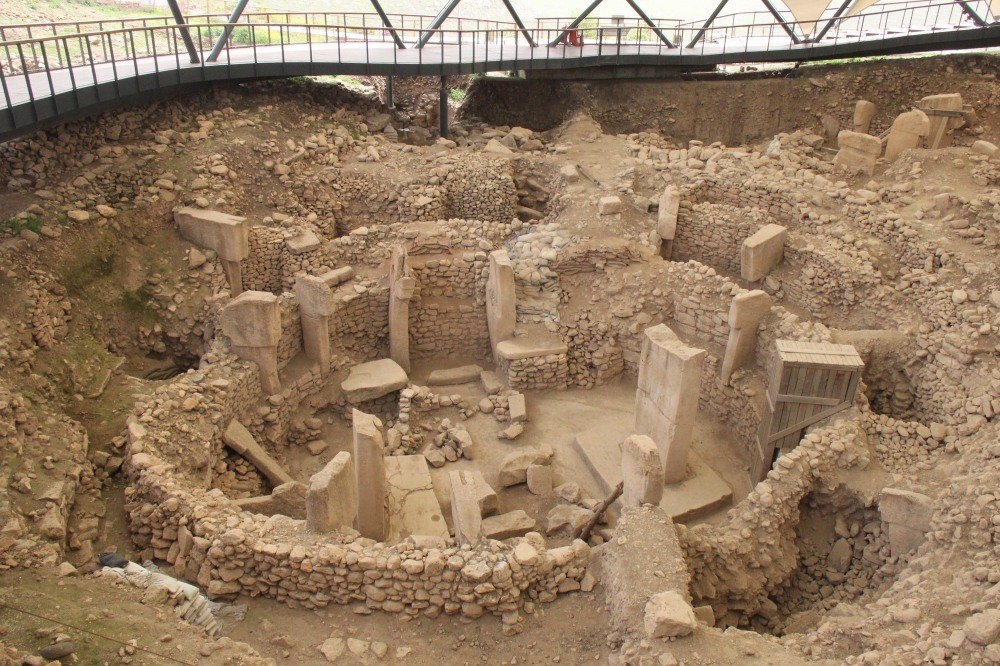 The Turkish government declared 2019 ,The Year of Gu00f6beklitepe, to boost tourism at what is recognized as the world's most ancient temple and a UNESCO World Heritage Site.
by Daily Sabah Dec 26, 2018 12:00 am

The ancient marvel Göbeklitepe, dubbed ground zero of human history, will be the poster figure for the Turkish tourism sector in 2019, as it looks to promote Turkey's World Heritage Sites and to attract more tourists

The world's oldest temple, considered the birthplace of early civilizations, Göbeklitepe will define the code of the Turkish tourism policy next year. In a bid to promote one of the most important and ancient archeological sites – located in Turkey's southeastern province of Şanlıurfa – the government has declared 2019 as the year of Göbeklitepe, President Recep Tayyip Erdoğan announced during his speech at the Justice and Development Party's (AK Party) parliamentary group meeting yesterday.

Highlighting the tourism performance in 2018, President Erdoğan said the government is preparing more initiatives to outpace this year's figures in 2019.

"As part of our preparations, we are declaring 2019 as 'The Year of Göbeklitepe'," he said.

Last year, as part of the government's policies to boost tourism in heritage sites, 2018 was named "The Year of Troy," Erdoğan recalled and noted that this initiative revived the tourism activities in the city by 60 percent.

"I believe that we will see a much higher performance in Şanlıurfa. This ancient settlement proves the importance of Anatolia in the history of humanity and it will certainly attract worldwide attention," he said and announced that he will attend the official opening ceremony in Şanlıurfa.

The government's decision has bee

n hailed by the regional tourism authorities. Müslüm Çoban, the Chamber of Regional Tourist Guides head, said the declaration is a profoundly promising initiative for Şanlıurfa and for the region.

Göbeklitepe has so far attracted more than 1 million visitors with accommodation packages and the number of daily visitors has exceeded 4 million, Çoban stated.

"In 2019, we as tourism professionals believe that Şanlıurfa will enjoy its golden years in tourism," he added.

Şanlıurfa Tourism Development Association Deputy Chair Rahime Yaşar also stressed the rapid increase in the number of visitors in the city and Göbeklitepe following the registration of the site in the U.N. World Heritage Site list. She also highlighted the necessity for local tourism professionals to ramp up their preparations for the coming year, especially expanding the accommodation services. "Göbeklitepe is a brilliant opportunity for us and we need to make the most of it," she added.

zero of human historyDiscovered during excavations by researchers from Istanbul and Chicago universities in 1963, Göbeklitepe is located near the neighborhood of Örencik in Şanlıurfa, 18 kilometers from the city center.

bbed the "ground zero of human history," Göbeklitepe stands out among other archeological sites, dating back 12,000 years, circa 10,000 B.C. Excavations at the site were launched in 1995 by German professor Klaus Schmidt, who brought to life the previously-unearthed finds that have long caused a stir among academics.

According to UNESCO, Göbeklitepe was the meeting center of the last hunters before humans switched to a lifestyle based on agriculture. "Göbeklitepe is a unique sacred space and sacred meeting center of the Neolithic period in terms of its location, dimensions, dating and monumentality of architectural ruins and sculptural pieces. There are settlement areas dating back to the same period as Göbeklitepe and the existence of

a cultural communication can be detected through small findings, but these settlements are much smaller in scale and have different functions to Göbeklitepe, which manifests a differing archaeological record," an article on UNESCO's website on Göbeklitepe says.

The site is also one of the earliest examples of establishment of an advanced social system as monuments, sacred spaces and symbolic motifs indicate. Unlike previous sacred sites, ritual places mostly included in natural formations such as caves, Göbeklitepe stands out with larger and smaller rectangular structures built by manpower. Historians and archaeologists believe the structures such as pillars represent "ancestors or gods" in the Neolithic age. After being temporarily closed to visitors due to restoration work, Göbeklitepe partially reopened in February.

According to the foreign ministry of Turkey, it is "the world's oldest known megalithic structure located in Upper Mesopotamia and dates back 11,000 years."

Registered previously on UNESCO's Tentative List of World Heritage Sites, the archaeological marvel entered the main list in July and has since seen an influx of local and international tourists coming in droves to take photos of this ancient wonder.