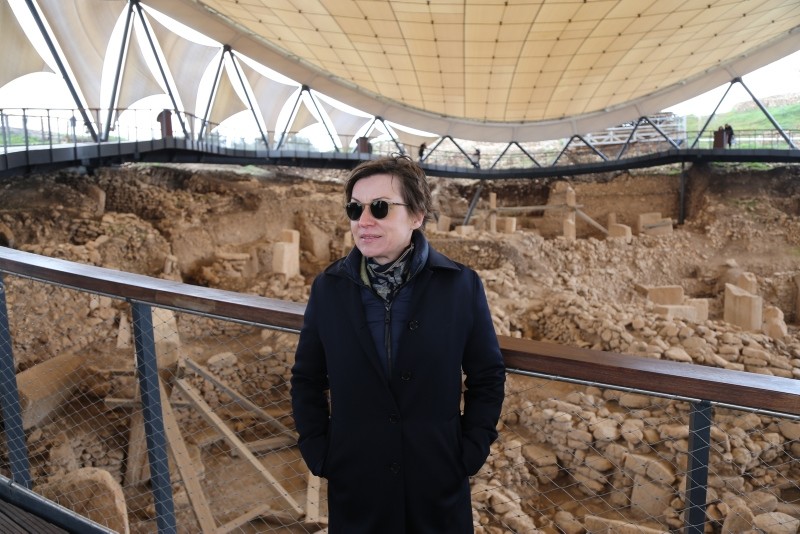 Mirjana Spoljaric Egger, the assistant secretary-general of the U.N., assistant administrator of the U.N. Development Program (UNDP) and director of the UNDP Regional Bureau for Europe and the Commonwealth of Independent States (CIS), told Anadolu Agency that she is delighted to visit Göbeklitepe and invited everyone in the world to come and see this "unique" and "unprecedented" historical site in the southeastern in Şanlıurfa province.

Inscribed on the UNESCO's World Heritage List last year, Göbeklitepe is a common stop for both local and foreign tourists, offering them a chance to observe ancient monuments dating back to some 12,000 years. Turkey has declared 2019 the Year of Göbeklitepe in honor of the 12,000-year-old Neolithic-era temple.

After taking a tour of Göbeklitepe with archeologists and historians as well as other U.N. representatives, Egger said that she was especially impressed with the excavation site and urged the world community to protect and sustain all UNESCO landmarks. She also said that the international community is well aware of Turkey's cultural and historical richness.

On a mission to review the UNDP's partnership with the Turkish government, the Swiss official visited key sites of the program in southeastern Turkey.

On Thursday, Egger and the accompanying U.N. delegation met with officials from the Regional Development Authority (BKİ) of the Southeastern Anatolia Project (GAP) in Şanlıurfa to sign a protocol on supporting women's employment.

The delegation previously visited an organic olive oil factory established through technology and funding support provided by the UNDP in southern province of Kilis in cooperation with a local producers' union. They later visited a greenhouse established by Kilis Municipality through U.N. funding.

Earlier on Wednesday, Egger met with Abdullah Erin, the governor of Şanlıurfa province which hosts 550,000 Syrian refugees and migrants in an area populated by 2 million locals.

"Your hospitality is exemplary. I am particularly impressed with the hardworking and modest attitude of the people I have met this morning," Egger told Erin.

"I am very impressed by what I have seen. And I see the responsibility and the challenge that you are facing in integrating so many Syrian refugees," she added.

Egger had said in a statement before visiting Turkey that the country supported the UNDP's regional program in Europe and Central Asia with $15 million since 2013, becoming one of the top non-OECD/DAC donors to UNDP core resources.

The Partnership Framework Agreement (PFA), signed by the Turkish Foreign Ministry and the UNDP, enables parties to expand national, regional, and global cooperation.

"I hope that in 2019 and beyond, we will expand our partnership with Turkey's generous support, with a view to reaching the Sustainable Development Goals (SDGs)," she underlined.

Turkey, the country with the world's largest number of refugees, hosts around 3.6 million Syrian refugees, the statement noted.

"The country provides a rights-based legal framework for hosting them, offering free access to education, health care, employment, and social security to Syrians. Turkey is also the largest donor of humanitarian aid in the world in proportion to its national income," Egger said.