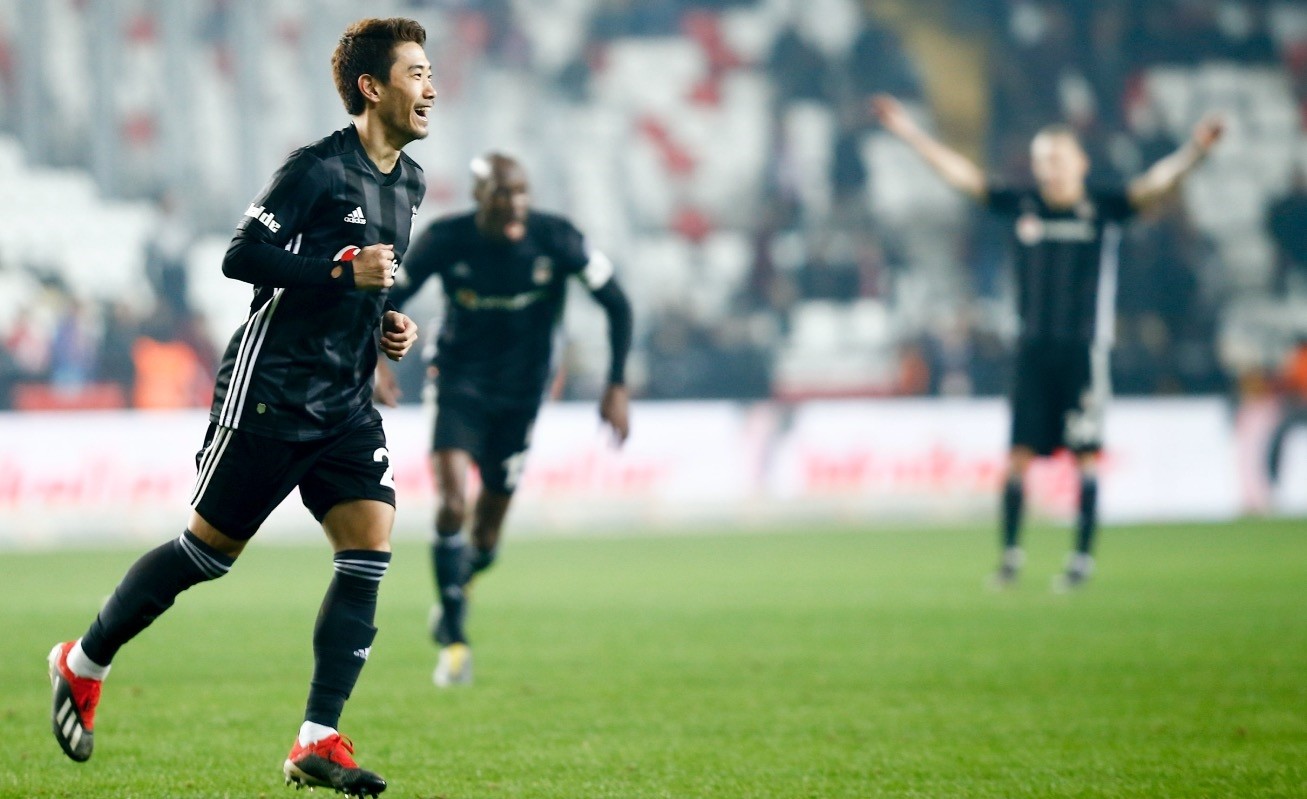 Japanese midfielder Shinji Kagawa celebrates after scoring on his debut for Beu015fiktau015f against Antalyaspor in the Turkish Super League, Feb. 3, 2019.
by Daily Sabah Feb 07, 2019 12:06 am

Japanese midfielder Shinji Kagawa's debut in the Turkish Super League has caused great enthusiasm in both countries, and tourism professionals now hope the player will contribute to Turkey's promotion in the Far Eastern country

Making an immediate impact on his debut for the Turkish Super League giant Beşiktaş, Japanese football star Shinji Kagawa has created a stir not only in the football world but also in the tourism circles.

Having a "dream debut" as Kagawa put it; his performance and kind posture have created a new interaction between the two countries. Tourism professionals have said that Japanese football players can have a major impact on Turkey's promotion in the Far East.

Just like Kagawa, tourism professionals also believe that interactions between the people of the two countries, which already share strong ties, will continue to increase.

Thanks to the 29-year-old, whose first match and presentation were widely covered by the Japanese media, tourism sectors expectations regarding the Far East may finally come to fruition.

Kagawa had a "dream debut," scoring two goals in three minutes after coming on for his Beşiktaş debut in a 6-2 win over Antalyaspor in the Turkish football league Sunday.

The Japanese midfielder has joined the club on loan from runaway German Bundesliga leaders Borussia Dortmund until the end of the season. Upon his transfer to Turkey, Kagawa joined his Japan teammate Yuto Nagatomo, who plays for another Istanbul powerhouse Galatasaray.

Having thrilled football fans both on and off the field, especially on social media channels, with his debut, Kagawa is now bringing similar enthusiasm to the tourism sector. Those who have leaped up with the good game of the "sympathetic Japanese" have begun to get more interested in visiting both Japan and Turkey. It did not go unnoticed that the Japanese also left comments for Kagawa who became the trending topic in Turkey on Twitter during Sunday's game.

Celebrating 2019 as "Year of Turkey," Japan is one of the top target tourism markets for Turkey. As part of the studies conducted by the Culture and Tourism Ministry, intense publicity activities will be carried out in Japan in the upcoming period to bring Turkey's values to the forefront. The Turkish Travel Agencies Association (TÜRSAB) Chairman Firuz Bağlıkaya said the declaration of "Year of Turkey" in the country's tourism field leads to special projects to reinforce the interaction with that country, apart from the usual activities, according to Turkish daily Milliyet.

Noting that Kagawa will also make a significant contribution to the celebration of 2019 as "Year of Turkey" in Japan, Bağlıkaya said this agenda arrived at the right time for the sector. "We have already been working on promotional campaign methods. Just as the interest in a region leaps following the visits of our artists and famous figures, this is what happens in the whole world as well," Bağlıkaya said, adding that "we cannot ignore social media's influence in recent years and in the coming period."

The Cappadocia Touristic Entrepreneurs Association (KAPTİD) Vice Chairman Dilek Yulaf said the promotional campaigns will definitely have a positive impact, adding the number of Japanese tourists continues to increase. "We will feel the impact of this increase in 2019. We see this in the demands for Cappadocia, which comes to the fore as one of the favorite destinations for the Japanese," Yulaf said.

Turkey's flag-carrier airline, Turkish Airlines (THY), is expected to increase the number of flights from Istanbul to the Japanese capital Tokyo, which currently stands at once a day, seven days a week, along with the addition of new destinations.

Meanwhile, Galatasaray's Nagatomo hosted Kagawa Tuesday for a dinner in his Istanbul resident. Following the dinner, Kagawa said he would like to return the favor after winning the Galatasaray-Beşiktaş derby, which is scheduled for early May.

On Wednesday, representatives of an agency that sells football broadcasts from abroad to the Japanese market made an unexpected offer to beIN SPORTS, which owns the broadcasting rights of the Super League and the Turkish Football Federation (TFF).

According to reports, the offer suggested that the derby is moved to 3 p.m. Istanbul time (GMT +3) so that Japanese viewers would be able to see the showdown between two of their favorite players – Kagawa and Nagatomo.

It was also noted that in case the offer was accepted, the intermediary firm will lend financial support to TFF, Galatasaray and Beşiktaş. It was stressed that a great number of Japanese fans could be brought to Turkey for the game within the scope of the financial support which may also cover the costs of streaming the training sessions of the two teams, as well as interviews with the players, prior to the game. How TFF and beIN Sports' respond to the request remains to be seen.

Both Kagawa and Nagatomo were part of the Japan team that reached the round of 16 in the 2018 World Cup held in Russia last summer.

Another report also said Japanese football channel Dazn announced on Feb. 1 via Twitter that it would stream Beşiktaş's games live because of Kagawa. Via the channel's official channel, several announcements and comments were released related to the Japanese player and the game both on Feb. 3 and afterward.