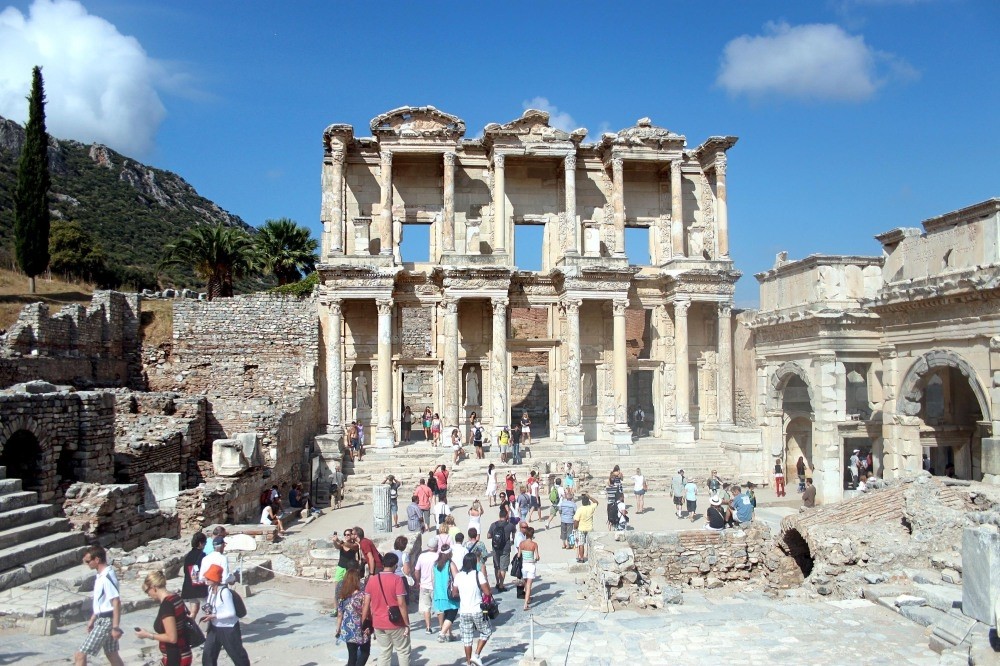 Turkey reached the highest number of visitors in 2018, welcoming around 47 million tourists, the European Travel Commission said.
by Daily Sabah Feb 19, 2019 12:06 am

The ETC highlighted that Turkey recovered quickly from the effects of the July 15, 2016, coup attempt. It added that the country saw a significant increase in the arrivals, particularly from Russia. Accordingly, the number of Russians visiting Turkey was 1.7 million higher than prior peak levels. Some 6.4 million Russian tourists visited Turkey in 2018.

The report also noted that hotels have been able to increase average room rates (ADR) in both Turkish lira and euro terms – in the month of December as well as in 2018 as a whole and that Turkey remains amongst the cheapest destinations within the accommodation dataset.

"The reversion to norms in terms of market share of Mediterranean destinations outlined in the last quarterly report appears to be continuing, with Turkey continuing to regain market share," it said.

The report added that Turkey saw growth in arrivals from Germany of 25.6 percent over January to November 2018 compared to the same period in 2017. Turkey is expecting record German arrivals in 2019.

On the other hand, British tourists have also flocked back to Turkey with the Turkish lira declining in value more than sterling. Arrivals were up 36.5 percent in the period January to November compared to the same months in 2017, the report noted.

"Growth of U.S. arrivals in Turkey was also very strong at 32.0 percent based on data to November," it said. Among others, Turkey continued to benefit from China's announcement of 2018 as "Turkey Tourism Year," with arrivals up by 67.1 percent on a year earlier. "As with most non-European source markets, there was strong growth of 74.4 percent in the number of Indian tourists visiting in Turkey. Turkey has been targeting the Indian wedding tourism market in particular," the report noted.

The ETC said that despite Europe's economic growth prospects faltering in recent months travel growth too, from, and within the region was robust in 2018, according to the latest available data. Thirty-two of 33 reporting destinations welcomed more arrivals and/or overnights compared to a year ago. Only the U.K. reported declines.

It highlighted that European tourism demand remained on solid footing with a 6 percent upswing in international tourist arrivals in 2018 over the year prior. "The most visited region in the world was able to sustain growth despite downside risks stemming from trade tensions, uncertainty surrounding Brexit and the economic slowdown in the Euro Area and China, all keeping 2019 growth prospects in question," it said. Virtually all reporting destinations (32 out of 33) registered some form of expansion, ETC said.

Following Turkey, Serbia and Malta were the countries registering the highest increase in the number of tourists in 2018, both with 15 percent. They were followed by Montenegro with 14 percent and Latvia, which was the only Central/Eastern European destination that enjoyed double-digit expansion, at 10 percent. "The U.K. [-5.3 percent] was the only market in negative territory," the report noted.

Among others, travel demand from the U.S. remained on firm footing. Growth from this market was fueled by a strengthened U.S. dollar against the euro and sterling, both increasing Europe's affordability as a tourism destination.

"In 2018 European destinations welcomed around 33 million international tourist arrivals from this market, up 8 percent from the previous year. The U.S. outbound travel, however, is expected to slow down owing to its decelerating economic momentum and consumer spending," the report read.

ETC said expansion continues in the eurozone, however, adverse risks such as tensions in financial markets, uncertainty surrounding the U.K.'s divorce plans from the EU and worrisome forward-looking indicators bear on growth prospects for 2019.

"Notwithstanding, the European tourism industry has yet again proved resilient in 2018 and accounts for over half [51 percent] of worldwide tourist arrivals. Looking ahead, growth in international tourist arrivals to the region is expected to hover around 3 percent in 2019," it added.