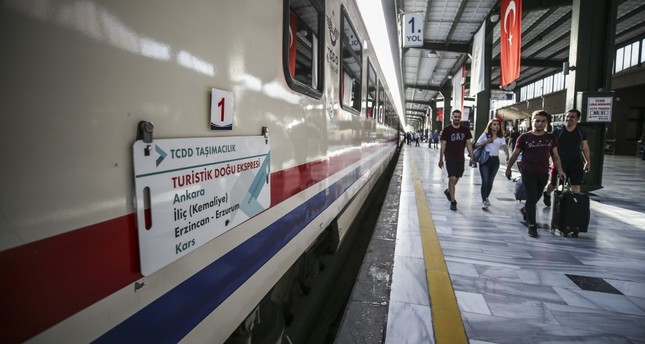 The Touristic Eastern Express, which has a capacity of 120 passengers, will complete the route between the capital of Ankara and the eastern province of Kars in 32 hours.

Introduced to boost railway tourism and meet the increasing demand for the traditional express train, the new tourist-only Eastern Express has been inaugurated

Introduced thanks to the efforts of the Transport and Infrastructure Ministry and the Culture and Tourism Ministry to meet the increasing demand for traditional express trains after the traditional Eastern Express became so popular that people trying to reach eastern Turkey by train could no longer find tickets, this new service is meant to provide better service and boost domestic tourism. The Touristic Eastern Express has hence been launched solely for tourism purposes between the capital of Ankara and the eastern province of Kars.

Addressing the ceremony, Culture and Tourism Minister Mehmet Nuri Ersoy said that they have revised the 2023 vision tourism goals and that they want to spread tourism over all the provinces and diversify the industry to achieve these goals.

Underlining that the new Eastern Express is one of the projects initiated to this end, Ersoy said: "As the ministry, we want to both diversify tourism and spread it over all 81 provinces. There are famous tourist trains in many parts of the world. This project has been developed to ensure that not only Kars, but also provinces and districts on the way, can take full advantage of tourism with longer-haul stops at three points on the way and at two points on the way back, instead of a few-minute stops at 50 stops."

According to the minister, train passengers will have the chance to have a more detailed visit to the region with tours organized by regional agencies and tour operators during the long-stay periods, as well as to experience the regional gastronomy and have the opportunity to shop.

Reiterating that this is just the beginning and train services will move to further stages, Ersoy said that, according to the transport and infrastructure minister, the train runs on alternate days and has the capacity to have two additional cars. In the first stage, the two cars will be added as long as demand is high, and then it will switch to a daily basis. After a certain period of time, other points will be activated. "We hope to add new routes such as a touristic Lake Van Express and a touristic Diyarbakır Express. We plan to settle them down during the year. We will plan how to connect these touristic trains with neighboring countries. We want the touristic train to not remain limited to Turkey. In the third stage, we will work out how to make these trains go to neighboring countries," the minister said.

On the other hand, Turkish State Railways (TCDD) General Manager Ali İhsan Uygun noted that railways have grown and developed thanks to transport policies, highlighting railways that have been in place since 2003 under President Recep Tayyip Erdoğan's directives and government support.

Pointing out that the contribution of railways to tourism has gained a new dimension with the development of the industry in recent years, Uygun said that demand for comfortable conventional passenger trains, as well as for high-speed trains, is increasing with the changed tourism phenomenon in Turkey. "The Eastern Express, operated between Ankara and Kars, which is one of the best routes in the world, is also one of the leading ones. Eastern Express passengers enjoy the fascinating pleasure of the charming beauty of Anatolia from the train window," he added.

Uygun remarked that the Touristic Eastern Express will offer the beauties of all the cities and towns along the Ankara-Kars route during its course, adding that the new train offers the comfort of a hotel.

The Touristic Eastern Express will depart from Ankara on Monday, Wednesday and Friday at 7:55 p.m. and from Kars on Wednesday, Friday and Sunday at 11:55 p.m. To enable passengers to visit historical and touristic avenues on the way from Ankara, the train will stop at Erzincan, İliç and Erzurum stations, while the passenger will get the chance to visit historical and touristic places on the way back at Divriği and Bostankaya stations in Sivas.

The new train consists of nine cars, including two service, one restaurant and six sleeping cars. With a capacity of 120 passengers, the train will complete the Ankara-Kars route in 32 hours.

Tickets went on sale on May 14, with TL 400 charged for a single compartment and TL 250 per person for a double compartment.

The 1,300-kilometer route of the traditional Eastern Express has been in high demand thanks to the picturesque landscape it travels through. As a result, the Culture and Tourism Ministry, through consultations with experts in the tourism sector, decided to launch a nine-car train for touristic purposes only. Before the newfound popularity, the average age of passengers on the train was 50, but now most passengers are university students.

Photographers and videographers are also among the most frequent travelers, as the route provides a wealth of landscapes and vistas, especially during winter. For those looking to be dazzled by a winter wonderland, January and February are the ideal months to travel on the Eastern Express.

After leaving Ankara, the train makes brief stops in the eastern cities of Kırıkkale, Kayseri, Sivas, Erzincan and Erzurum before reaching Kars. At the end of the trip, passengers can stretch their legs, or take a sleigh ride on frozen Lake Çıldır in Kars.

Share on Facebook Share on Twitter
Previous in Tourism Turkey's holiday resort city of Antalya has hit a new all-time daily... Next in Tourism The number of foreigners visiting Turkey surged 24% on a yearly basis...
DAILY SABAH RECOMMENDS