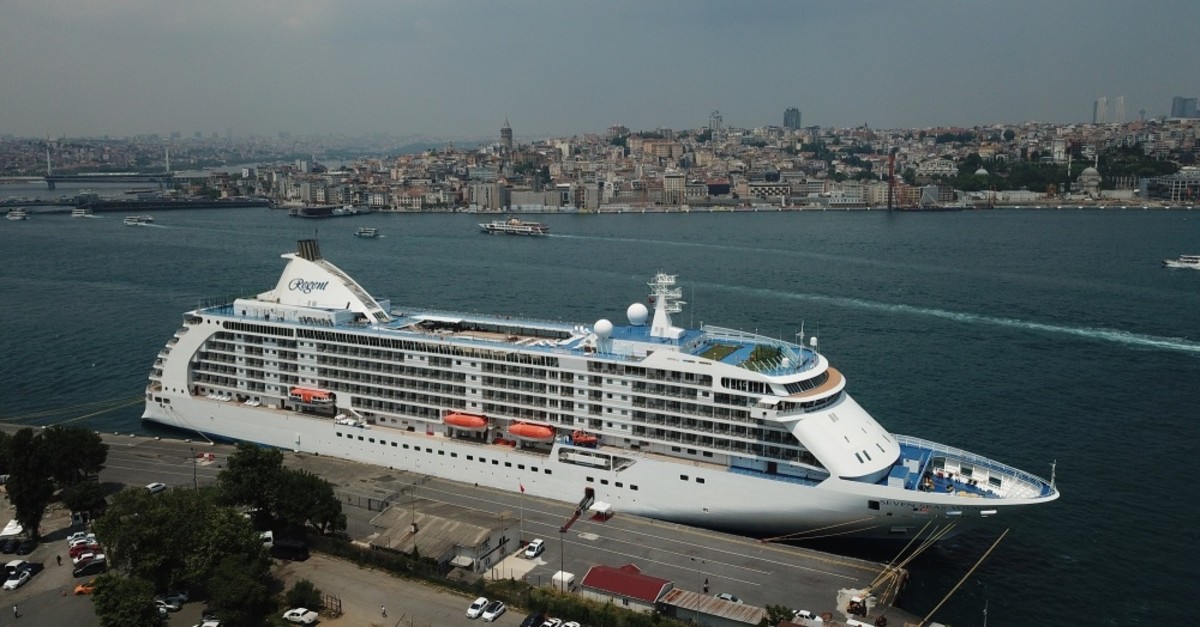 Luxury cruise ships have set their course for Turkey. While 275 ships will bring 400,000 tourists by the end of the year, this number is expected to reach 550,000 in 2020 and 2 million in 2021. Local tradesmen, on the other hand, are quite pleased with these tourists whose daily spending per person is $1,000 on average.

In the Turkish tourism sector, which aims to reach 50 million people and $35 billion in revenue this year, incentives and supports provided in addition to the tranquil environment have begun to bear fruit. The cruise line, one of the most important income items in the sector, has started to revive in Turkey, where foreign tourists have been flocking since the beginning of the summer season. Istanbul, which broke a record with 307 ships and 689,000 passengers in 2013, regressed to four ships in 2017 due to terror incidents and hit zero in 2018, is now back in the market.

On Thursday, the first cruise ship of the year arrived in Istanbul. The 10-story Regent Seven Seas Voyager, which dropped anchor at Sarayburnu Port, brought 750 tourists to Istanbul. Cruise ships returning to Istanbul are expected to make 30 rounds by the end of the year. About 30,000 cruise tourists will come to Istanbul this year where small ships carrying 800 to 1000 people will dock due to the port problem.

About 275 cruise ships will operate countrywide, particularly in the ports of Kuşadası, Marmaris and Bodrum. Turkey is expected to host an average of 400,000 cruise passengers by the end of the year. These tourists shop around the city all day long, spending an average of $800 to $1,000 per person. Meanwhile, approximately $400 million in revenue is expected this year from cruise tourism. Since cruise tourism has begun to revive this year, sector representatives expect 370 ships and about 550,000 cruise tourists in 2020 with approximately 80 cruise ships docking in Istanbul, where Galataport Port will open next year. According to tourism operators, with the solution to the port problem, large vessels carrying an average of 4,000 tourists will drop anchor in Istanbul, and this mobility will especially please local tradesmen in the Grand Bazaar. Grand Bazaar Chairman Fatih Kurtulmuş said that some leather, jewelry and carpet stores closed due to the loss of cruise ships. "The ships turned the route to Istanbul. These stores will reopen in the coming days," he said and pointed to the high spending potential of these tourists. "They buy everything from the smallest items to the most expensive antiques, spending thousands of dollars."

Tura Tourism Chairman Erkunt Öner said $30 given as an incentive per passenger revived cruise tourism. Pointing out that planning for cruise tourism was made two years in advance, Öner said that the incentive decision for 2020 and 2021 should be announced as soon as possible. "Aircraft incentives were given until a certain number was achieved. This should be valid for the ships as well. If incentives are provided, cruise tourists will reach 2 million in 2021," he said. Istanbul Tourism Association (ISTTA) Chairman Ibrahim Halil Korkmaz pointed out that cruise tourists are in the upper-income group, saying they spend an average of $1,000 per day. Korkmaz stressed that cruise tourists definitely visit historical places such as Topkapı and Hagia Sophia. "Topkapi Palace welcomes an average of 10-12,000 visitors a day. A small cruise ship carries an average of 1,000 people, and all of them visit these museums, making a 10 percent contribution to museum visits," he noted.