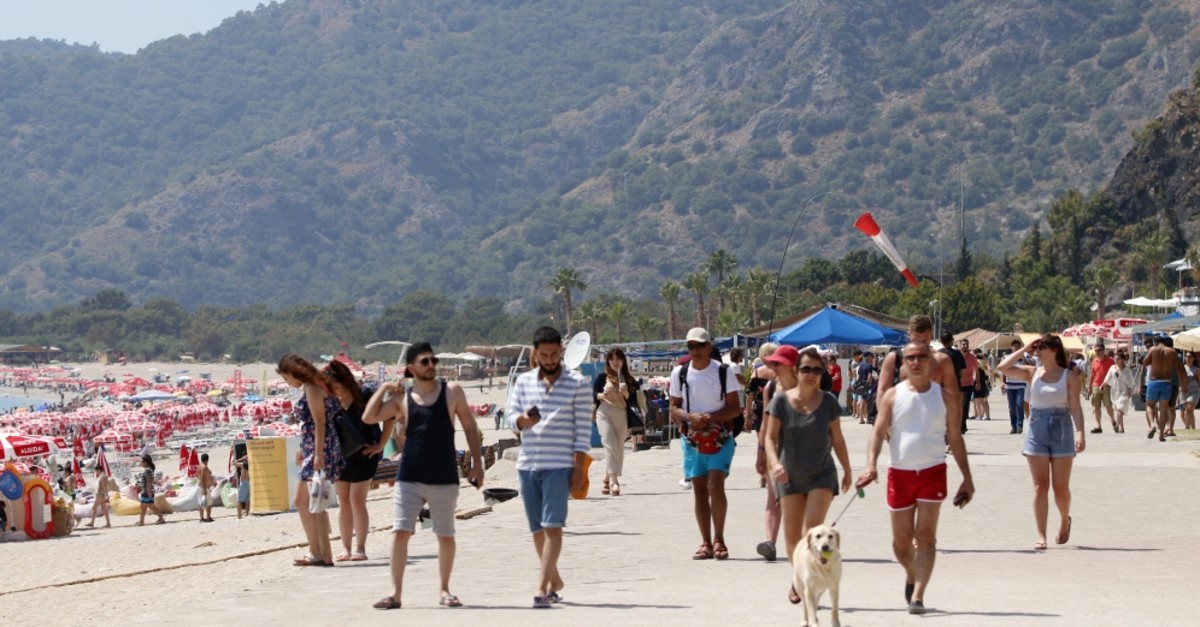 Domestic tourism gained significant momentum during the nine-day Ramadan Bayram break, seeing millions traveling across the country, boosting hotel occupancy rates and ramping up expenditures. The revenue created during the holiday is projected to have exceeded TL 12 billion

The nine-day break during Ramadan Bayram, also known as Eid al-Fitr, has created a stir and led to a notable boom in Turkey's tourism sector. From east to west and north to south, local and foreign tourists swarmed all parts of Turkey, while hotels across the country reached their full capacities.

Some 3 million tourists are reported to have flocked to the Aegean region, while over a million people decided to spend the holiday in the Mediterranean basin. Another 100,000 local and foreign tourists flocked to the Black Sea region, while 15,000 people stayed in the Cappadocia region, famous for its fairy chimneys and rich history.

Ramadan Bayram was planned to officially start on June 4 and end on June 6. But Turkish authorities signed a circular declaring that July 3 (a Monday) and July 7 (a Friday) would also be holidays, effectively creating a nine-day public holiday, including the two weekends.

Turkish Travel Agencies Association (TÜRSAB) Chairman Firuz Bağlıkaya said the extension of the holiday to nine days and its early announcement created a boom in demand.

"There was an interest that even exceeded our expectations," Bağlıkaya said. "Our forecast was to create a volume of TL 10 billion during the holiday. No official figure has been announced yet, but we envisage a 20 percent increase and an economy exceeding TL 12 billion."

A significant stop of both local and foreign tourists during the holiday was the Black Sea region, which hosted more than 100,000 people. The population of Düzce's Akçakoca district, which is normally around 25,000, increased five-fold during the holiday. Local and foreign tourists flocked to Kartepe, a famous resort located in Turkey's Kocaeli province.

The most popular holiday destination of the local tourists was the Aegean coast. Bodrum hotels with 100,000 beds in total reached full capacity, which led to many holidaymakers to rent summer houses. Hotels in Antalya's Kaş district, renowned for its crystal-clear blue sea, caught 100 percent occupancy during the holiday as well.

"The average rate of local tourists in hotels in the Aegean region found 50 percent. All hotels were full 100 percent for the first two days and 85 percent on the third day due to return," he said.

The Mediterranean basin was equally as busy as the Aegean coast. More than 1 million people holidayed in summer houses and hotels in Mersin and Antalya. Mersin's coastal districts of Silifke, Erdemli and Anamur were quite busy during the holiday, while hotels reached full capacity in Kızkalesi.

Kaan Kavaloğlu, the vice chairman of the Mediterranean Touristic Hoteliers Association (AKTOB), said more than 1 million people vacationed in summer houses and hotels in Mersin and Antalya, stressing that 30 percent of hotels in Antalya hosted local tourists on average.

Thousands of tourists came to Ürgüp, Göreme and Ihlara Valley in the Cappadocia region. Yakup Dinler, president of the Cappadocia Touristic Hoteliers and Operators Association (KAPTİD), recalled that the 20 percent capacity of the hotels was allocated to local tourists in this period.

"An average of 15,000 people stayed in hotels. A thousand overnight tourists also visited from nearby areas, forming long queues for balloons as well as restaurants in the city," Dinler added.

Meanwhile, the southeastern Anatolia region came to the fore as one of the most sought-after spots in the holiday period. Long lines of traffic occurred in Halfeti, Şanlıurfa, which resembles a coastal city thanks to the Birecik Dam Lake. TÜRSAB Southeastern Anatolia Regional Chapter President Soner Bacaksız said 200,000 people participated in Southern Anatolia tours covering Adıyaman, Gaziantep, Şanlıurfa, Diyarbakır, and Mardin. "The hotel occupancy average in the region exceeded 90 percent. Locals and tourism professionals, as well as tradesmen, are pleased with the intense interest," he added.

Turkish Bus Federation President Mustafa Yıldırım noted that while 18,000 daily rounds were usually scheduled countrywide, they arranged 20,000 additional rounds due to the holiday.

"Occupancy of buses rose to 100 percent. We exceeded the 10 million passengers we had envisaged, reaching 11 million in total," Yıldırım said.

Holiday mobility was also reflected in the airports and particularly Istanbul Airport's terminals were swarmed with holidaymakers. Some 700,000 people are reported to have used Sabiha Gökçen from Friday, the beginning of the holiday, until Thursday. Between May 31 and June 6, 880,000 passengers used Antalya Airport on 5,640 flights. The number of passengers using İzmir Adnan Menderes Airport reached 234,597 on 1,543 flights. Bodrum Milas Airport, on the other hand, served 137,097 passengers on 1,098 flights. Alanya Gazipaşa Airport served 31,659 passengers. The number of passengers using the Ankara Esenboğa Airport stood at 217,288 on 1,731 flights.

Tourism mobility also benefited the food and beverage sector. Ramazan Bingöl, the chairman of the Association of All Restaurants and Suppliers (TÜRES), stated that the demand during the holiday exceeded their previous expectations.

"In particular, there were queues in front of renowned restaurants with high-profile locations and popularity. We attribute this to the formation of gastronomic culture and the increase in income level," he continued. "The average spending per person on food reached TL 150 during the holiday. This figure had not even exceeded TL 50 four or five years ago. People used to pass meal time in a simple way, like with a meatball sandwich; they now prefer to go to a nice restaurant."