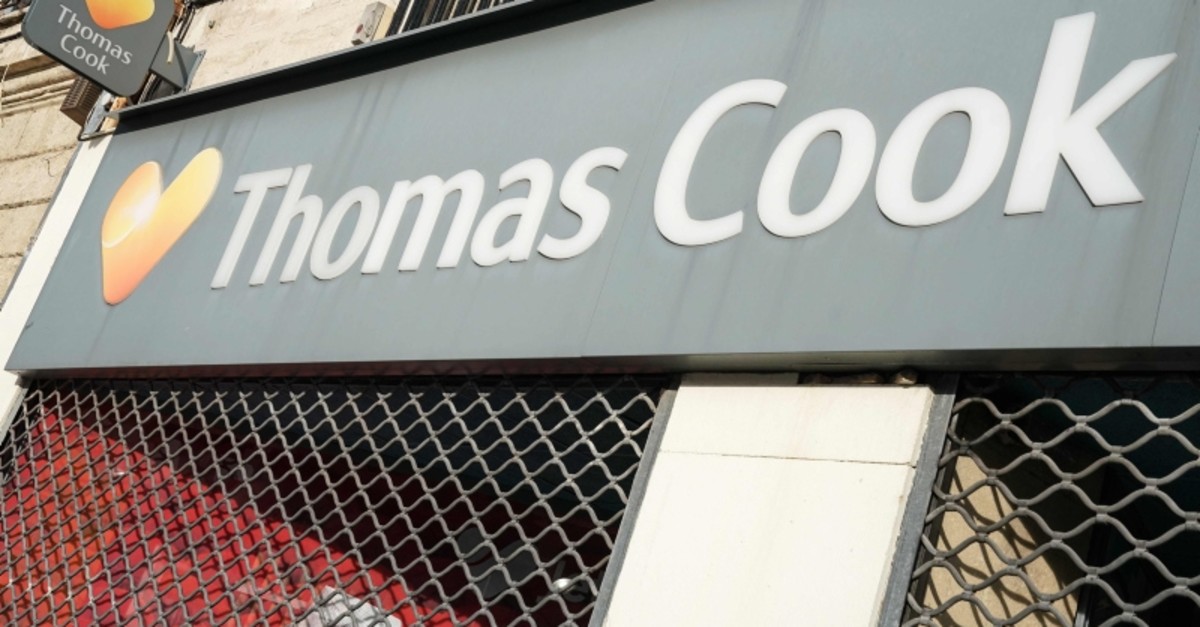 A picture taken on September 23, 2019 in Montpellier, shows the logo of British travel group Thomas Cook. (AFP Photo)
by Daily Sabah with Wires Sep 23, 2019 12:35 pm
Turkish authorities said Monday they were working on a loan support package for local companies affected by the collapse of British tour operator Thomas Cook and moved to reassure tourists in Turkey who booked and paid for their holidays through the iconic firm.

In a major shock, Thomas Cook, the world's oldest travel firm, collapsed Monday, stranding hundreds of thousands of holidaymakers around the globe and sparking the largest peacetime repatriation effort in British history.

The 178-year-old British operator failed to get a last-ditch rescue deal over the weekend and declared bankruptcy, leaving 600,000 tourists stranded worldwide, forcing governments and insurance companies to coordinate a huge operation to bring them all home.

Some 150,000 of those passengers are Britons seeking help from London to return home.

Hours after the announcement, Turkey's Tourism Ministry said it was working with Treasury and Finance Ministry on a "credit support package" to be put in place as soon as possible to help affected businesses.

In a statement on Twitter, the ministry said that 21,033 Thomas Cook customers were currently on holiday in Turkey.

It stressed that tourism establishments cannot request payments from Thomas Cook customers, warning that there would be legal proceedings against hotels demanding payment from guests or forcing them to leave.

"If establishments request payments from Thomas Cook U.K. guests or vacate them from their rooms, these establishments will face legal action," it added.

The payments of Thomas Cook U.K. guests staying in Turkish tourism establishments – including over the weekend – are guaranteed by the Air Travel Organizer's License (ATOL) of the U.K. Civil Aviation Authority (CAA), the ministry tweeted.

For canceled flights, the Air Travel Organizer's License announced that it is organizing new flights for these passengers.

Turkey's beaches along its western and southern coasts are popular tourist destinations. The Mediterranean holiday resort of Antalya was one of Thomas Cook's top destinations, along with famous holiday spots such as Bodrum and Dalaman.

Operations not limited to U.K. alone

In a press conference after attending an event in the capital Ankara, Culture and Tourism Minister Mehmet Nuri Ersoy said Thomas Cook's operations are not limited to the U.K. alone and that there are also German, Nordic and Russian divisions.

Ersoy reminded that each country has its own agreement and that the ATOL covers all payments following the bankruptcy of a company.

"Of course, each country has its own legislation. Hopefully, it will be limited to the U.K. In the first stage, our priority is for foreign guests to return to their countries without too much discomfort. The British guests are very important in particular," he continued and recalled the British tourists support in the aftermath of the July 15 failed coup in Turkey.

"They kept coming very intensely and we, as tourism operators, need to show the same sensitivity, especially concerning British guests… It is important to ensure that the guests return to their country in the fastest and most peaceful way in the first place," the minister added.

Highlighting that Thomas Cook had around 700,000 passengers in Turkey during the season, Ersoy stressed that the end of the season allows this situation to recover.

On the other hand, Turkish Hoteliers Federation (TÜROFED) Chairman Osman Ayık said Turkey experienced similar events in the past, adding that they hope to overcome this situation as well.

Ayık argued that Turkish tourism could be negatively affected by the bankruptcy of the British tour operator Thomas Cook, noting that the British market is on the rise, especially in the last two years.

"This is a misfortune. Many destinations in Spain, Portugal, Greece, and other continents will be affected negatively, but of course, the situation in our country concerns us the most," Ayık told Anadolu Agency (AA). "There are many large and small-sized enterprises in Kuşadası, Marmaris, Fethiye and Dalaman regions where this tour operator is especially active. There is a chain to be affected from employees to suppliers."

Professional Hoteliers Association (POYD) Chairman Ülkay Atmaca said they watched in astonishment to see a world giant 178-year-old company to come to this stage, pointing to the company's significant contributions to Turkish tourism.

Atmaca said tourists would never be victimized due to Thomas Cook's bankruptcy.

He added that in recent years, the number of British tourists in Turkey reached 2.5 million, and that while a large part of them went to the Aegean region, he suggested that everyone could be negatively affected by the bankruptcy of such a company.

"There may be economic concerns, but sector stakeholders need to act quickly and take steps to somehow resolve Thomas Cook's opening," he continued. "Turkish tourism has made significant progress in recent years. It is not only based on one or two markets but also works on alternative markets. Of course, it will not be possible to fill Thomas Cook's shoes in a short time, but we must act fast and create alternatives."

Thomas Cook was a major part of the industry for packaged holidays, which are particularly popular in Europe.

Thomas Cook's second-largest shareholder and chairman of Anex Tour Group, a major Turkish tour operator, Neşet Koçkar, said the company will be sold fully or in parts, adding he would see what is offered before deciding whether to buy more assets.

Koçkar, who holds an 8% stake in the U.K.-based travel firm, said Thomas Cook owes "a few hundred million pounds" to Turkish businesses that may not be paid after it is sold.

Turkey-based Anex Tour caters mainly to tourists from countries such as Russia and Ukraine.

Thomas Cook was a major part of the industry for packaged holidays, which are particularly popular in Europe.

As the only remaining tour operator with a significant U.K. retail store base and only major fully integrated European tour operator, TUI stands to gain the most, Reuters cited Citigroup analysts as predicting.

The bank reckons Thomas Cook had about 8% of the British market versus TUI's 19%, and 10% of the German market compared with TUI's 17%. It had the biggest overlap with easyJet.

It may only be a short-term boost though. The woes that crushed Thomas Cook – from Brexit uncertainty to high fuel costs and a fare war in Germany – will continue to haunt the holiday sector.