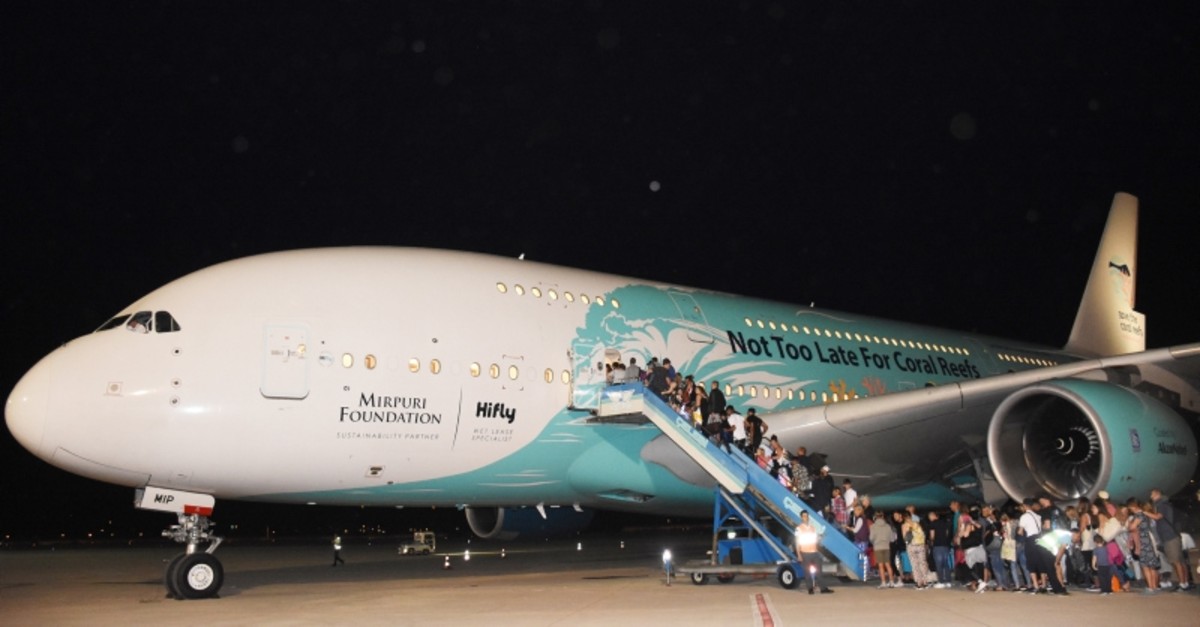 Thousands of British tourists are being flown home from various countries, including Turkey, with the support of the British government, after being stranded by the collapse of the 187-year-old holiday operator

British tourists are leaving Turkey as the U.K. resumes a massive operation to bring home tens of thousands of holidaymakers stranded in Europe and elsewhere after the collapse of the iconic Thomas Cook travel company. Hundreds of thousands of Thomas Cook customers around the globe early Monday were left stranded and in shock as the world's oldest travel firm collapsed and ceased all operations with immediate effect. The 178-year-old British operator failed to get a last-ditch rescue deal over the weekend and declared bankruptcy, leaving 600,000 tourists stranded worldwide, forcing governments and insurance companies to coordinate a huge operation to bring them all home.

The British government took action, lining up flights to bring an estimated 150,000 Britain-based customers back home from vacation spots around the globe in what was called the biggest peacetime repatriation effort in the country's history.

Nearly 1,000 British tourists flew for the U.K. Monday from Dalaman Airport in southwestern Turkey's Muğla via 12 planes that were sent by the U.K. Civil Aviation Authority (CAA).

The flights included an Airbus A380, the world's largest passenger aircraft, which made its first commercial flight from Turkey. The first flight from Dalaman Airport to London included 222 passengers.

An additional 3,000 tourists were expected to leave the province Tuesday.

Tourists waiting for return flights at the airport were informed by officials, who came from the U.K.

Hours after the announcement Monday, Turkey's Culture and Tourism Ministry said 21,033 Thomas Cook customers were currently on holiday in Turkey.

It stressed that tourism establishments cannot request additional payments from Thomas Cook customers, warning there would be legal proceedings against hotels demanding payment from guests or forcing them to leave.

The ministry said it was working with the Treasury and Finance Ministry on a "credit support package" to be put in place as soon as possible to help affected businesses.

The payments of Thomas Cook U.K. guests staying in Turkish tourism establishments – including over the weekend – are guaranteed by the Air Travel Organizer's License (ATOL) of the CAA, the ministry tweeted.

The CAA said yesterday it brought 14,700 Thomas Cook customers back to the U.K. on 64 flights Monday. A further 135,000 passengers are expected to be brought back on rescue flights over the next 13 days, including 16,800 on 74 flights yesterday. Everyone will be brought back regardless of nationality or whether they are protected by the government-backed travel insurance program.

Overall, about 600,000 people were traveling with Thomas Cook as of Sunday, though it was unclear how many would be left stranded, as some regional subsidiaries were in talks with local authorities to continue operating.

Thomas Cook, which had struggled against the fierce online competition for years and blamed Brexit uncertainty for a recent drop in bookings, declared bankruptcy after failing to secure 200 million pounds ($250.57 million) from private investors.

Monday's bankruptcy followed a lengthy period of chronic financial turmoil after a disastrous series of mergers left it burdened with soaring debt, a large branch network and high costs.

The U.K.-based Guardian yesterday reported that the U.K. government has been accused of sealing Thomas Cook's fate, as claims emerged that the Turkish and Spanish governments had offered to help save the stricken tour operator, only for the deal to disintegrate due to a lack of support in Westminster. The discussions were abandoned on Sunday after the government turned down the company's request for financial support to help tide it over the winter.

Citing a source familiar with the rescue talks, the report said Thomas Cook had reached an agreement to secure 200 million pounds with help from the Turkish government and a group of Spanish hoteliers backed by a minister in Madrid, adding that they were willing to invest to limit the potential damage to their tourism industries.

However, rescue talks collapsed after the British government said it was not prepared to provide any financial guarantees to underpin the funding package.