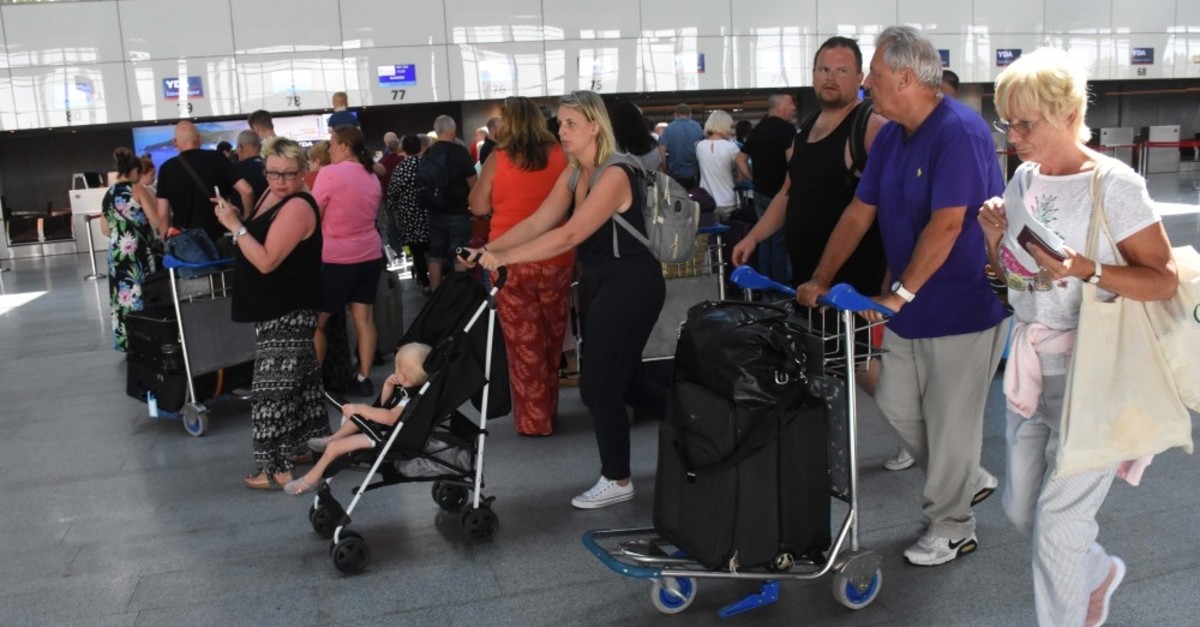 British tourists continuing to return home from their holidays at resorts in Turkey via planes allocated by the U.K. government after the collapse of U.K. tour operator Thomas Cook. They are leaving happy thanks to the hospitality they experienced during their stay in the country. Many of them are expressing a desire to come back next year as well.

The British tour operator collapsed and filed for liquidation on Monday, sparking the largest peacetime repatriation effort in British history. The collapse has left tens of thousands of holidaymakers stranded around the world. The British government is currently working on flights to bring Britain-based customers back home from these vacation spots.

Britain's Civil Aviation Authority (CAA) said yesterday 30% of the total number of passengers, in the first three days of the operation, had already been flown back, while it scheduled over 70 flights for yesterday to bring back another 16,000 people to the country.

A total of 21,033 Thomas Cook customers were initially on holiday in Turkey when the announcement came on Monday. Their returns from holiday districts in the southwestern province of Muğla and the Mediterranean holiday resort Antalya, their favorite spots, continued yesterday.

Thomas Cook's collapse was upsetting for tourists in the region and it lead to a major mobility, said Dalaman Airport General Manager Cengiz Tuğrul Ayaz. Ayaz emphasized that all measures were taken and all procedures were underway, adding that they were cooperating with the British government and the Air Travel Organizer's License (ATOL).

"Up to 5,000 of our guests who have completed their holiday so far have been transported by 22 aircraft," he added, referring to tourists in Muğla, as flights continued yesterday.

"There is no such problem in our country. On the contrary, they are sent off with flowers because the British are very important to us, and they have quite an interest in the region," Ayaz said.

'A fantastic and impressive country'

Prior to their flight home, British tourists expressed their satisfaction with the hospitality they encountered during their stay in Turkey, with most of them saying they will be coming back next year as well.

British tourist Stephen Yorke said he had a holiday with his family in Fethiye for 15 days and said he had no problems at the hotel during his stay.

"We have full confidence in the British government and civil aviation. I have never heard anything bad from other friends staying in our hotel," Yorke noted. "Turkey is a very fantastic and impressive country. I also came here 10 years ago. We cannot give up on Turkey. I had a perfect holiday. Turkey is very welcoming, and we will come again," he added.

Josephine Maher said that she had been coming to Turkey every summer for almost 20 years, adding that she loved Muğla very much and recommended it to all her friends for vacation.

"Our holiday was perfect. Turkey is very welcoming, and we will come again next year. We had no problems in our hotel. Not only us, no one had any problems. They have been really good to us. We are like a family now," she said, recalling they heard on the news that in some countries, British tourists were kept in hotels and were forced to pay extra money. Saying that they certainly did not encounter such a situation in Turkey, Maher stressed that they were well-received and sent off with flowers.

Arlene Clarke pointed out that she had been in Marmaris with her family for 15 days and that she came to Turkey last year as well. "We will be back here next year, no matter what. We love Muğla and the hospitality of the Turkish people. Since the announcement of the bankruptcy, we have not experienced any negativity. After our holiday we return to our country safely," Clarke said.

Emily Eckersley came to Turkey for the first time and loved it, adding she stayed one more night with her family after missing their plane on Wednesday and they would come again next year.

British Steve Rayment also said that they did not hear about any tourists having trouble in Turkey due to the bankruptcy of the tour operator. "Everyone is taking good care of us. My only problem was that my son was supposed to come on holiday, but he could not make it due to bankruptcy. Other than that, I am having a great holiday, and everyone is quite helpful. At the first opportunity I will come to Marmaris again on vacation," Rayment underlined.

SunExpress, a joint venture of Turkish Airlines (THY) and German Lufthansa, yesterday said will provide extra capacity to fly tourists stranded in Turkey back to their homes. It said it would fly passengers from Antalya and London Luton Airport to support the continuation of tourism flow from the U.K. to the city and to help affected passengers, the company said in a statement.

"SunExpress, which has played an important role in the development of Turkish tourism since its establishment, strives to provide all kinds of support in eliminating the deficits," SunExpress Commercial Director Peter Glade said.