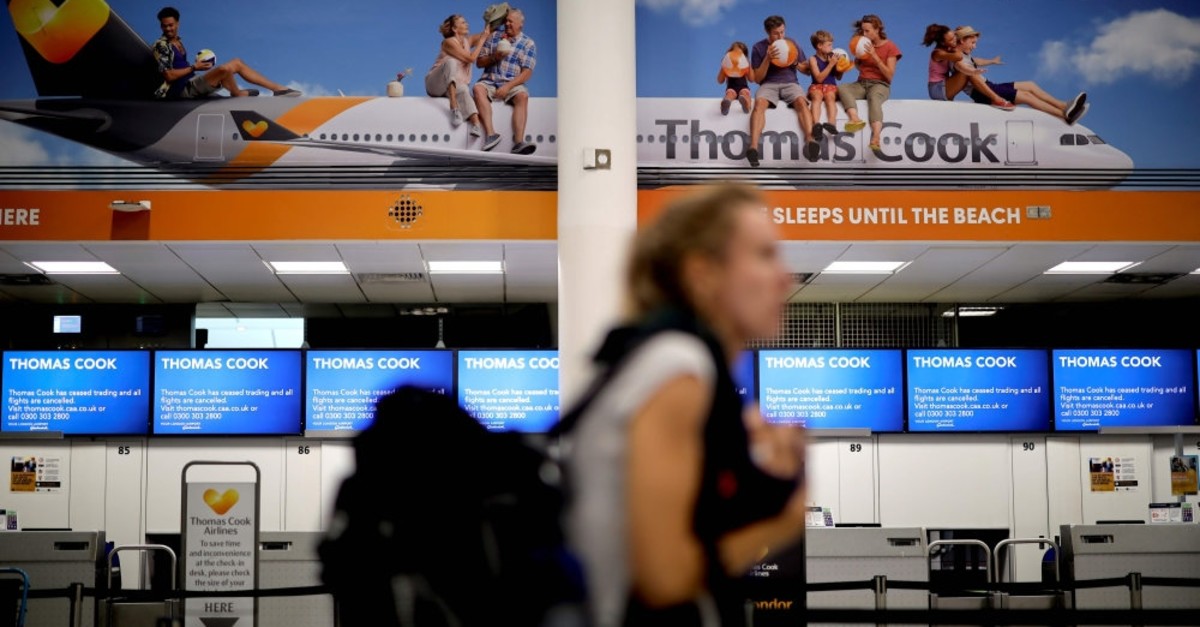 Passengers walk past the closed Thomas Cook check-in desks at the South Terminal of London Gatwick Airport in Crawley, south of London, Sept. 23, 2019,
by Daily Sabah with Wires Oct 02, 2019 12:33 am

Thomas Cook worked directly with suppliers by establishing contractual and invoice-based relations, especially for accommodation, which is said to be the biggest reason behind the tour operator's debt to the industry

Turkey's Tourism Advisory Council said yesterday it estimates that Thomas Cook owes the local sector more than 350 million euros ($381.08 million), adding that it was impossible for the amount to be repaid in the short and medium term. Thomas Cook, the world's oldest travel agency, collapsed last week, sparking the largest peacetime repatriation effort in British history. The 178-year-old British operator failed to get a last-ditch rescue deal and declared bankruptcy, leaving more than half a million people stranded around the globe. The council's remarks came in an evaluation statement, which covered the negative impacts of Thomas Cook's collapse on the Turkish tourism sector and recommendations for steps to be taken to minimize them.

The Tourism Advisory Council, an umbrella organization consisting of eight leading nongovernmental organizations in the sector and national flag carrier Turkish Airlines (THY), said the tour operator had obligations of over 350 million euros in the Turkish tourism industry as it worked directly with suppliers by establishing contractual and invoice-based relations, especially accommodation.

In the aftermath of the collapse, the Culture and Tourism Ministry said it was working with the Treasury and Finance Ministry on a loan package to be put in place as soon as possible to help affected businesses.

The Advisory Council said businesses should be offered a much bigger loan package than the government's planned 50 million euros – and that it should have long maturity terms, low interest rates and a grace period of three years.

Smaller businesses should be prioritized while giving out loans, the council added.

The bankruptcy of Thomas Cook's subsidiaries in Belgium, the Netherlands, Germany, Switzerland, Austria and Poland, following the U.K., constitute an extraordinary and abnormal situation for the sector, the council said.

The statement stressed that 2 million tourists come to Turkey from these markets.

"Considering Thomas Cook's market-based seat capacities, Turkey is the second-most affected country after Spain. Upon perceiving this crisis correctly, understanding the current and subsequent aftershocks and taking correct measures, it is possible to reduce the damage. Therefore, it is of utmost importance to correctly identify the situation and problem first and then to implement effective solutions promptly," it read.

In its statement after the collapse, Culture and Tourism Ministry said that the payments of Thomas Cook U.K. guests staying in Turkish tourism establishments were guaranteed by the Air Travel Organizer's License (ATOL) of the U.K. Civil Aviation Authority (CAA).

It stressed that tourism establishments cannot request additional payments from Thomas Cook customers, warning that there would be legal proceedings against hotels demanding payment from guests or forcing them to leave.

Tourism Advisory Council noted that with the announcement of the bankruptcy, the ATOL / CAA and the German Zürich Versicherung became interlocutors.

"While the responsibilities of these two institutions emerged at the time of the announcement, it only includes the remaining stays, return transfer and air travel of Thomas Cook passengers having their package holidays as the first day of the bankruptcy announcement," the council said.

"Keeping this in mind, it should be remembered that the exemption of the passengers not covered by this framework from the accommodation debts arising from the current debts is demanded by the ministry in the first place and that this demand is supported by the sector, meaning that our sector undertakes a new sacrifice," it continued. "Considering that the money collection method from existing passengers is adopted in countries like Spain and Greece in the same situation, it should be appreciated that our industry has done more than its part even in this difficult situation and that it has given a good account of itself by hosting the guests as required by Turkish hospitality."

In the meantime, the British government continues to work on flights to bring Britain-based customers back home from vacation spots.

So far 115,000 customers out of more than 150,000 have returned in the largest peacetime repatriation "Operation Matterhorn," which was launched on Sept. 23, according to Britain's Civil Aviation Authority. It said yesterday 39 flights were scheduled to bring back a further 7,000 people to the country. A total of 21,033 Thomas Cook customers were initially on holiday in Turkey when the operator ceased its operations. Their returns from holiday districts in the southwestern province of Muğla and the Mediterranean holiday resort Antalya, their favorite spots, continue.

In the meantime, while announcing Turkey's tourism strategy for 2023 on Friday, Culture and Tourism Minister Mehmet Nuri Ersoy said Turkey will be able to make up for the number of tourists lost in the collapse of the U.K.-based tour operator, which brought 700,000 passengers to Turkey this season before it went bankrupt.

He also announced that several airlines were expected to increase the number of flights to the country. Ersoy said he was unconcerned by the collapse and that Turkey was holding talks with several airlines to add more flights into areas affected by the closure of the tour operator.

"Nobody should be concerned by this," said Ersoy. "By 2020, we will see an increase in the number of visitors to Thomas Cook destinations."

He said British budget airline easyJet had guaranteed that it will provide additional capacity for 350,000 people annually to Turkish holiday destinations.

Ersoy added that Turkish Airlines and its joint venture with Lufthansa, Sunexpress, would each schedule one additional flight per day to Dalaman Airport, located near several Aegean holiday destinations.

He said easyJet, British Airways and Jet2 officials would be in Turkey this week to discuss details and sign a deal to increase the number of flights.