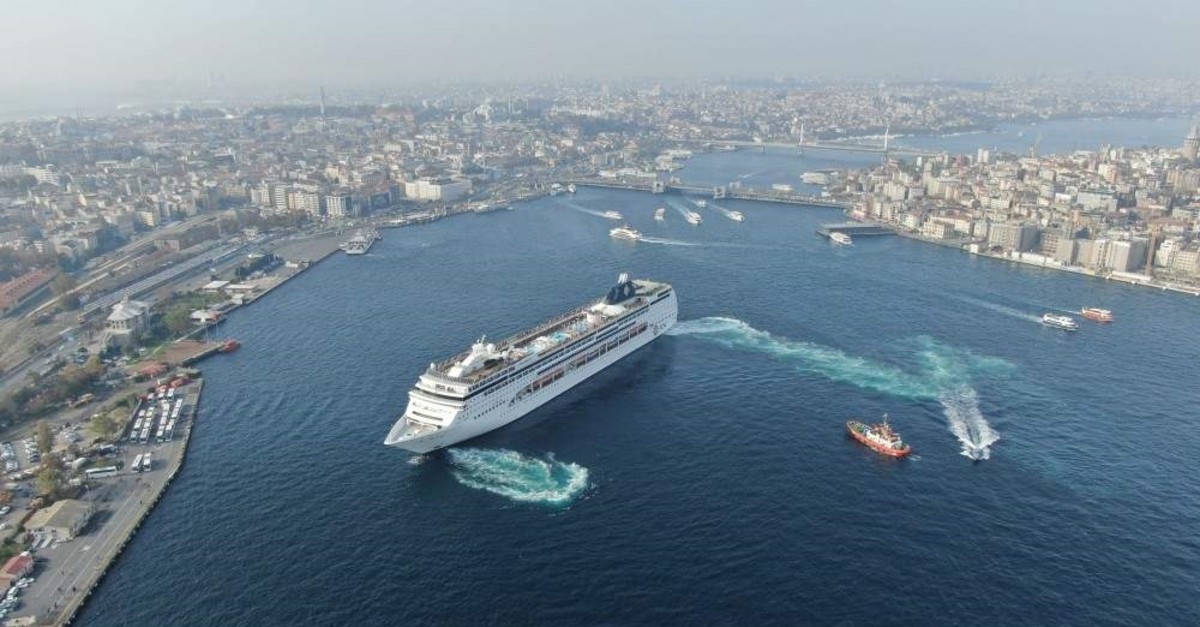 The Panama-flagged MSC Lirica cruise ship docked at Istanbul's Sarayburnu port, Nov. 16, 2019. (DHA Photo)
by Daily Sabah with Agencies Nov 17, 2019 8:40 pm
Istanbul on Saturday welcomed one the largest cruise ships arriving in the city in recent years as the MSC Larica, which set sail from a port in Venice, Italy, docked at the city’s Sarayburnu port.
The Panama-flagged giant vessel carrying 2,000 passengers departed from the Greek island of Rhodes on Friday for Istanbul and arrived at noon on Saturday. It was expected to leave yesterday and turn its route to Greek island of Mykonos.
Tourist from different parts of Europe enjoyed the city during their stay, which increased their travels in the region. The shopkeepers expressed their satisfaction, adding they wanted the number of arriving tourists to increase.
At 275 meters in length and 48 meters in height, the 12-story vessel weighs 65,591 gross tons.
Sarayburnu Port Manager Akın Demir said it was a historic day for Istanbul. “Although this ship was not scheduled, it arrived in Istanbul due to the high demand of passengers and our communication,” he noted.
Rezal Koç, the Grand Bazaar tradesman and a board member, said they attach importance to the cruise tourism due to the qualified tourists and pointed to its benefit for both Grand Bazaar and its surroundings.
Cruise tourism in Istanbul, which had come to a standstill in the last four years has started to rebound this year. Some 24 cruise ships were expected to arrive in the city by October and the number is expected to reach 80 in 2020.
A new cruise port is in the plans at Istanbul's Yenikapı district and the tender bidding is likely to take place by the end of this year. In addition, Istanbul's megaport project Galataport, which is currently under construction, is also expected to revive the city's cruise tourism sector.
“We demand that they increase. We are very pleased with the opening of Galataport and the fact that the berthing area in Yenikapı will be tendered. Tourists also want to go shopping due to the limited time during their stay,” Koç stressed.
On the other hand, Medlog Shipping and Tourism Agency General Manager Savaş Ercan underlined the importance of cruise tourism for Istanbul and Turkey, stressing they hope to host more ships and passengers in Istanbul and Turkey with the ports scheduled for inauguration and new ports to be opened in the future.
Ercan further emphasized that the arrival of a ship of this size to Istanbul after a long break would set an example for other companies. “The MSC is one of the biggest brands in the world that believes and invests in Turkey. Therefore, when the program changed and we expressed our desire to host them in Istanbul, they immediately turned their routes to the city,” he continued. “This will be a very important message for Turkish tourism. We need to host more ships and tourists in Istanbul together with the new ports.”
Last Update: Dec 20, 2019 1:45 am
RELATED TOPICS