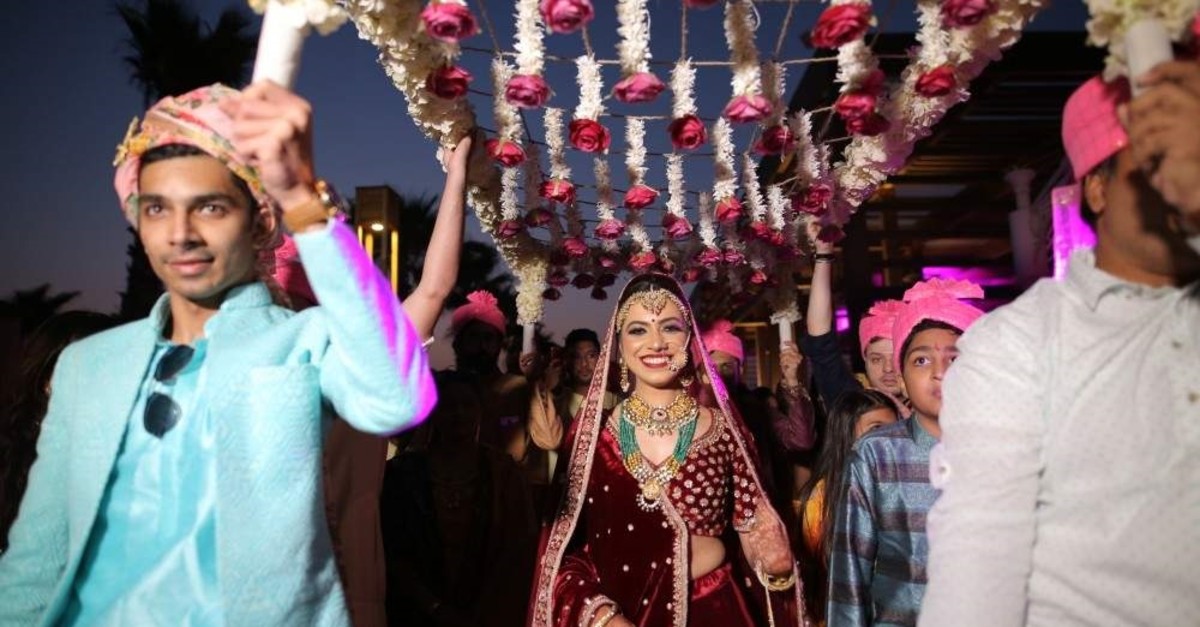 Turkey, as the new destination for million-dollar Indian weddings, is said to have already booked numerous reservations for next year, which could surpass the record-setting year of 2019

Turkey has hosted 32 million-dollar Indian weddings throughout the course of this year, making 2019 a record year for the number of lavish Indian weddings held in the country, according to a wedding industry insider.
Growing apace with the demand, Turkey’s efforts aimed at playing a larger role in the Indian wedding industry seem to have paid off as it is gradually gaining a growing share of the main market of the world's wedding tourism.
Most Indian couples prefer to tie the knot in the luxury hotels in Turkey’s resort towns, particularly the Mediterranean resort city of Antalya, which is enjoying a boost in tourism year this year.
Weddings that usually last for three days and three nights with the participation of hundreds of guests, many of whom arrive at the resort city on private jets, make a significant contribution to the city's tourism, especially during the low season.
The latest of these extravagant weddings were held on Dec. 10-13 in Antalya’s Serik district. Some 200 guests, who were said to have arrived on private planes, attended the lavish gathering. In addition, chefs, decorators, and technical teams, as well as a part of the equipment, were all brought from India for the event, which was organized by Inventum Global, an Indian wedding organization firm based in Antalya.
Indicating that only 15 weddings were held in Turkey prior to 2019, Bünyat Özpak, one of the co-founders of Inventum Global, told İhlas News Agency (İHA) on Saturday that 32 weddings were held in 2019 alone, a new all-time high.
“We organized 25 weddings this year as the company,” he said, adding that together with other companies, this number is estimated to have reached 32.
Pointing to the importance that Indians attach to weddings, Özpak noted that the income level of Indian families who prefer Turkey is quite high. He noted that they have already received many reservations for 2020, as well.
“We have a total of 13-14 confirmed and even prepaid weddings for October. If it goes on like this, the number of events we alone will carry out will be 35-40 weddings,” he added.
India, one of the two countries in the world with a population of more than 1 billion, ranks second in group events after the U.S. and first in wedding tourism. The expenses of these extravagant weddings range from $500,000 to hundreds of millions of dollars.
Turkey, which wants a share of the $50 billion Indian wedding industry, has made serious progress in the last two years following President Recep Tayyip Erdoğan's visit to India and the efforts of local tourism companies.
Thailand, located close to India, holds the biggest share of these weddings, followed by Malaysia and Singapore. Dubai, on the other hand, has increased its share rapidly in recent years.
However, the visa application process between India and Turkey is seen as the biggest obstacle. Tourism professionals stress that more weddings and events could be organized with the abolition of the visa and with mutual incentives per tourist applied by India and Turkey.
Touching on Turkey’s mutual visa application with India, Özpak said with the introduction of electronic visas, the number of Indian weddings and tourists welcomed at these events might increase.
“It is not possible to catch the numbers we want without the introduction of the electronic visa,” he said. “We are now offering China great flexibility. If we offer the same flexibility to India, the return will be faster and economically higher. If this happens, we think it will be 10 times the figures we are talking about. Approximately 250,000 passengers came from China in 2019. When we provide visa facilitation to India, we will reach 1 million passengers in a couple of years and have a tenfold increase in the number of weddings.”
Özpak underscored that these weddings also contributed to the increase in per capita tourist income.
“According to the figures announced by the Tourism Ministry, we have an average income of $600-604 per person. The factors that increase this figure are meetings and congress groups. Their figures go up to $1,100,” he noted. “However, Indian weddings are usually higher. Some spend 2,000 to 6,000 euros per person. Indian weddings are organizations with the highest per capita spending in the world. Therefore, it has a very serious economic return. They also come in the low season. They come from November to May with quite high spending.”
Özpak said they hosted the world's largest diamond producer in 2019. “We hosted the biggest in the world. They had a great wedding here,” he said. “Apart from that, we held the wedding of the daughter of the owner of a leading company in the electronics industry in India, as well as the wedding of one of the richest families in India in terms of real estate. As we bring these families, it becomes easier for us to bring others. With their reference, it becomes easier to convince those who do not fully understand Turkey.”
Last Update: Dec 20, 2019 2:24 am
RELATED TOPICS