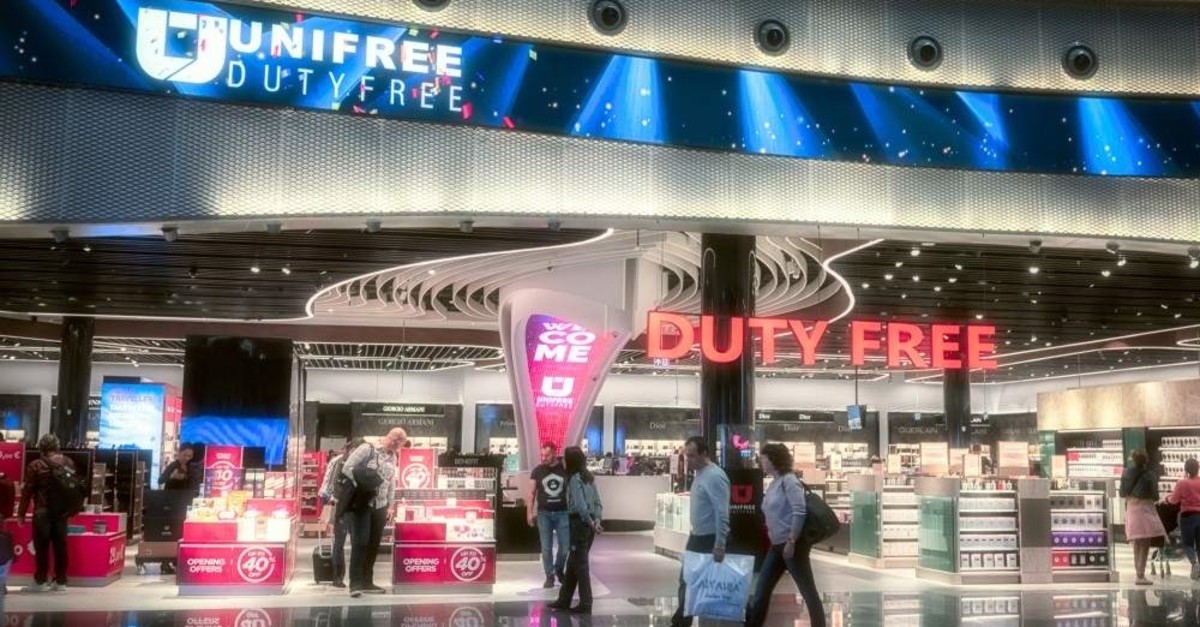 People are seen in the duty-free area at Istanbul Airport, Istanbul, April 14, 2019. (iStock Photo)
by Alen Lepan Dec 19, 2019 11:00 pm
Besides being a new aviation hub, Turkey’s Istanbul Airport has, so to speak, started to look more like a giant shopping mall, as it is becoming a home of a new trend: Foreigners arriving on a day trip just to enjoy the amenities it offers with its modern retail concept.
“There are foreigners who come to Istanbul for a day of shopping at the duty-free sales area at Istanbul Airport,” said Ali Şenher, the CEO of Unifree Duty Free, which is operating probably the world’s largest duty-free shopping complexes under the partnership of Heinemann, the world’s largest duty-free operator, at the giant airport.
Most of them are coming from the Middle East, Şenher told reporters at a meeting in Istanbul Thursday. “We have customers that come from the Middle East via morning flights, use the lounges of Turkish Airlines and IGA, later on, do their shopping in our stores and then take a flight back in the evening,” he said. He suggested this trend is expected to gain further momentum after March.
Passengers at Istanbul Airport are greeted by globally known brands right after passing through passport control for international departures. Inspired by the Bosporus in its design and spread over an area of 56,000 square meters – equivalent to nine football fields – the retail area is serving customers with 133 stores, 1,500 brands and 50,000 different products.
CHINESE TOP BUYERS
“We will have served around 7 million customers by the end of this year. We aim to serve some 10 million passengers in 2020,” he noted. He added that some 23% to 24% of the passengers arriving in Istanbul Airport shop. Of the company’s 7 million customers, 75% were foreigners, while the rest were Turks.
Listing the nationalities of the customers who did the most shopping in the complex after Turks, Şenher said the Chinese topped the list followed by Russians, Germans, Ukrainians, Iranians and Iraqis. Among others were Americans, French, British and others from Middle Eastern countries.
Some 75% of the sales are to foreign passengers, he added. Şenher emphasized that 82% of the turnover comes from stores in the departure terminal, which means a serious sales of Turkish goods abroad and important foreign exchange inflow. The remaining 18% of the turnover is obtained from stores in the arrival terminal. Moreover, 25% of the sales in the departure stores and 60% of sales in the arrival stores were to Turks, he added.
Despite coming in second to Turks, Şenher said the Chinese spent two times more than the Turks per person. He suggested that a global average basket per passenger amounts to some 45 euros, indicating that the Chinese spend three times more than an average customer.
PERFUME AND SKINCARE GOODS AT TOP
Speaking of their shopping habits, the Unifree CEO underscored that the Chinese mostly prefer skincare products and perfume. Germans, on the other hand, prefer tobacco, while Ukrainians, Russians, Iraqis, and Iranians predominantly also chose perfumes.
In terms of product categories, perfume, cosmetics and skincare products post the highest sales, such that Şenher said this category constitutes nearly 50% of the turnover, followed by the accessory and textile category and domestic goods, food and chocolate.
“There are skin products varying from 2.5 euros to 3,500 euros. There are bags [worth] 10 euros as well as up to 15,000 euros,” he added.
A PIECE OF JEWELRY FOR 90,000 EUROS
Speaking of some major sales at the airport, Şenher said a Chinese customer had bought a piece of jewelry worth some 90,000 euros. “On the other hand, we had a Middle Eastern customer that purchased a watch worth 50,000 euros. Also, a customer from the Far East bought a skin cream worth 3,500 euros... China, the Middle East and the Far East tend toward the luxury shopping segment. The U.S. and the U.K. follow them,” he noted.
According to Şenher, some 3,000 tons of domestic food is being sold per day. “Interest in Turkish fairy floss, Turkish delight, baklava and other Turkish products is very high,” he added.
Unifree, which signed a 25-year agreement with Istanbul Airport operator IGA to operate duty-free shops, has so far made an investment of some TL 1.2 billion in the wide area, Şenher said.
A TURNOVER TARGET OF 900 MILLION EUROS
Pointing to 2019 as a very successful year, Şenher underscored that the company is closing the year with a 35% growth, while a turnover target of $900 million euros has been set for Istanbul Airport for 2020.
Unfree currently operates an area of 140,000 square meters in eight countries at 22 different airports and one border gate, proceeding on its path with around 3,700 employees.
The giant Istanbul Airport's first phase officially opened on Oct. 29, 2018, the 95th anniversary of the founding of the Turkish Republic and recently celebrated its first anniversary. It served some 40.47 million passengers in its first year.
Located some 30 kilometers north on the shores of the Black Sea, the airport started commercial flights on Oct. 31, before the first phase became fully operational on April 7, as the airport took over air traffic from the now-closed Atatürk Airport on April 6, after thousands of tons of equipment were ferried across the city in what was said to be the greatest logistical operation in civil aviation history.
The airport can handle 90 million passengers a year in the current phase of development, which, while it is a high figure, is nothing compared to its potential capacity to serve 200 million after the completion of all phases.
Once fully operational, it will be the world's largest airport in terms of the number of passengers. All four phases of the airport's construction and expansion, including six runways, are expected to be completed by 2028. It is set to become a global aviation hub hosting more than 100 airlines and flights to over 300 destinations around the world.