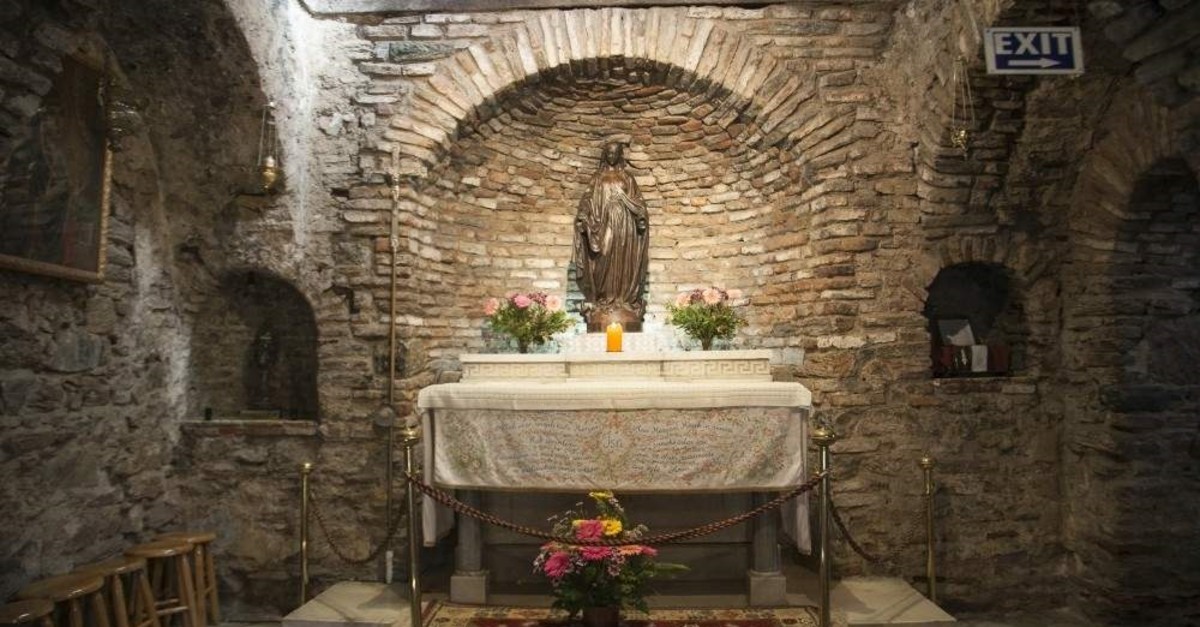 A view of the inside of the House of Virgin Mary, where Mary is believed to have spent her last days, in Ephesus, ?zmir, Turkey. (iStock Photo)
by Betül Alakent Dec 29, 2019 8:01 pm
Turkey covers an area that has been home to countless faith groups over the course of thousands of years. The country now aims to unleash its religious tourism potential in order to diversify its range of tourist attractions.

The Culture and Tourism Ministry included religious tourism in its 2023 Tourism Strategy Plan as a means of appealing to more international tourists, aiming to reach a peak of 75 million visitors by that date – a number revised up from 50 million. To this end, the ministry has planned a religious route the crosses the country, with five religious tourism hubs already having been pinpointed to spearhead the initiative.

With its diverse range of touristic opportunities in areas such as gastronomy, health, culture and congress tourism, Turkey has already nearly reached its original 2023 goal of attracting 50 million tourists two years ahead of schedule, the Istanbul Tourism Associations (ISTTA) Chairman İbrahim Halil Korkmaz said Sunday, adding that the country was now widening its targets, putting a stronger focus on religious tourism.

"We are now aiming to welcome 75 million tourists by the end of 2022 with an expected revenue of $65 billion," Korkmaz said.

He highlighted the importance of making the country a religious tourism hub in an attempt to achieve these targets, noting that the number of Muslim tourists had already reached up to 140 million by 2018, compared to a mere 25 million in 2000.

Turkey is in an advantageous position in terms of religious tourism potential, given it has a wealth of sites not only significant for Muslims, but followers of several religious denominations, as a historical meeting point of civilizations.

One of the towns designated as a hub of religious tourism includes Şanlıurfa, in the southeast. Dubbed the "City of Prophets," the city attracts visitors looking to find Abraham's Path. The city is known where Abraham was thrown to fire and saved by God. The path that Abraham claimed to took ends in modern-day Palestine and is significant for various communities including Muslims, Jews, Christians, Alevi and Samaritans.

There are certain places in Turkey that are significant for Christianity, as some cities are believed to be on the Christian's pilgrimage way. Saint Paul's Church in the Tarsus district of the western Turkish province of Mersin is one of them where "Paul of Tarsus" is believed to have been born, attracting millions of Christian pilgrims, who are baptized by water from the holy well.

Another important Christian site is the Home of the Virgin Mary in the Selçuk district of İzmir, a western Turkish city where the assumption of the Virgin Mary to heaven is believed to have taken place, dating back to the Apostolic Age. It has been a popular spot for Christian pilgrims since its discovery in the 19th century.

The fourth-century saint St. Nicholas, also known as Nicholas of Bari or Nicholas of Myra, the saint who inspired the commercialized figure of Santa Claus, was also born in what is now Turkey. The saint is remembered in his hometown – the Demre district of modern-day Turkey's southern Antalya province – every year, with ceremonies led by Phanar Greek Orthodox Patriarchate, an Istanbul-based church with followers both in Turkey and across the world.

Welcoming tens of thousands of tourists from across the Muslim world each year, Turkey is also home to the tomb of Abu Ayyub al-Ansari, a companion of Prophet Muhammad and a prominent warrior in the Muslim campaign to conquer Constantinople, who died in 672. The tomb is located in the area known as Eyüp, which is how the martyr is known in Turkish.

There is also a famous tomb and museum dedicated to the world-famous Sufi mystic, Rumi, in Turkey's central city of Konya. Mevlana Jalal ad-Din ar-Rumi was an Islamic mystic and philosopher who had lived in Konya 791 years ago. He believed in the importance of patience and for forwarding the idea that ethics and knowledge must be valued above the temporal and material.

Korkmaz also said that there would be a similar boost to conference tourism in order to achieve the 2023 tourism action plans. He underlined that they expected significant growth in congress tourism in the coming years along with increased cruise ship and sports tourism.
Last Update: Dec 29, 2019 10:50 pm
RELATED TOPICS