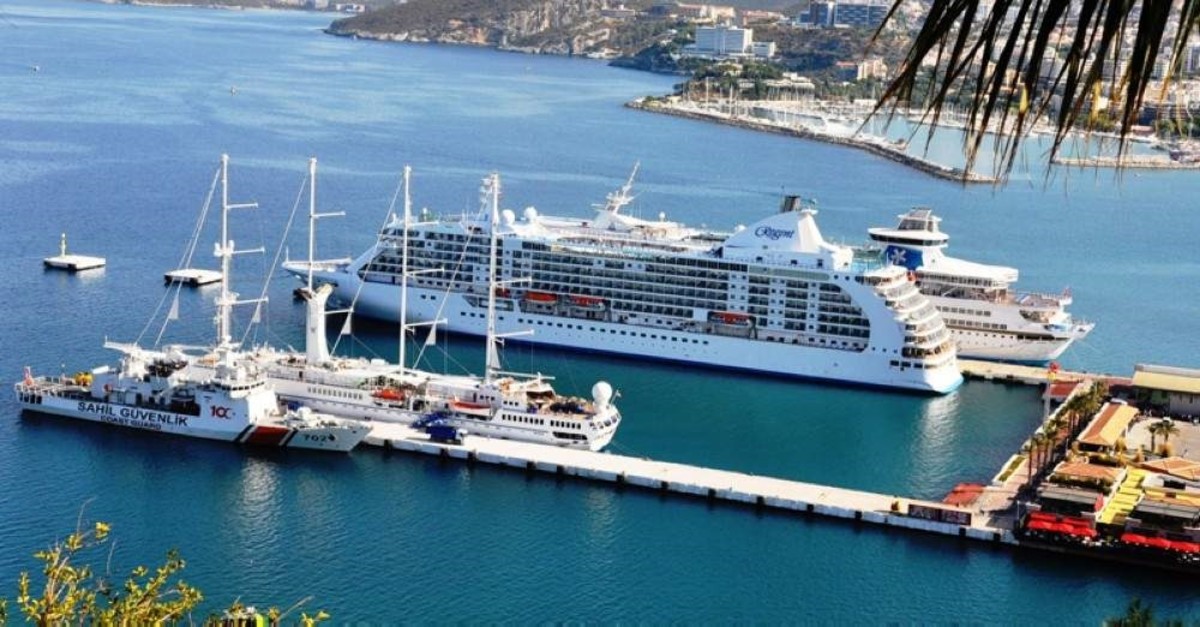 Ku?adas? is a famous holiday resort town and is situated conveniently close to major archaeological sites. (AA Photo)
by Daily Sabah with AA Jan 06, 2020 6:13 pm
With cruise companies directing their routes to Turkey again, the Kuşadası region of the Aegean province of Aydın, where the highest number of cruise ships anchor annually, has experienced one of its best tourism seasons ever.

Güngör said "the dark clouds have disappeared" for Turkish cruise tourism with cruise ships adding Turkey back to their itineraries after coming to a standstill in 2016 with ships cancelling calls in the country's ports.

He added that there has been a 30% growth in the number of ships anchoring in Turkey in 2019, and the number of passengers grew by 40% compared to the previous year.

Noting that they expect the real recovery to take place in 2020, Güngör said they forecast a 60% increase in the number of ships and to double the arrival of tourists.

He noted that cruise ships continued to dock at the port even in winter months, adding that it was the first time for the region to receive tourists in the off-season.

"In January, nine cruises ships have brought 10,000 tourists. It was the first time for Kuşadası to experience such a long cruise season."

Kuşadası is a famous holiday resort town and is situated conveniently close to major archaeological sites and the Dilek Peninsula National Park, one of Turkey's most biologically diverse areas. Kuşadası is also home to some of the region's most pristine beaches. In 2017, Kuşadası's Ege Port welcomed 126 ships and 118,418 cruise passengers.

Turkey continues its efforts to reinvigorate cruise tourism and is carrying out works to eliminate the lack of ports, particularly in Istanbul. Having come to a standstill in the last four years, cruise tourism in Turkey's largest metropolis has started to rebound this year. Some 24 cruise ships were expected to arrive in the city by October, and the number is expected to reach 80 in 2020.

As part of the works to boost cruise tourism, a new cruise port is in the plans in Istanbul's Yenikapı district and the tender bidding is likely to take place soon. Besides, Istanbul's mega port project Galataport, which is currently under construction and expected to open in March 2020, is also expected to revive the city's cruise tourism sector.

The port is expected to host around 500 cruise ships carrying an average of 4,000 passengers each, likely reaching a total of 2 million people. With the staff and crew of the ships included, the figure is expected to be even higher.
RELATED TOPICS