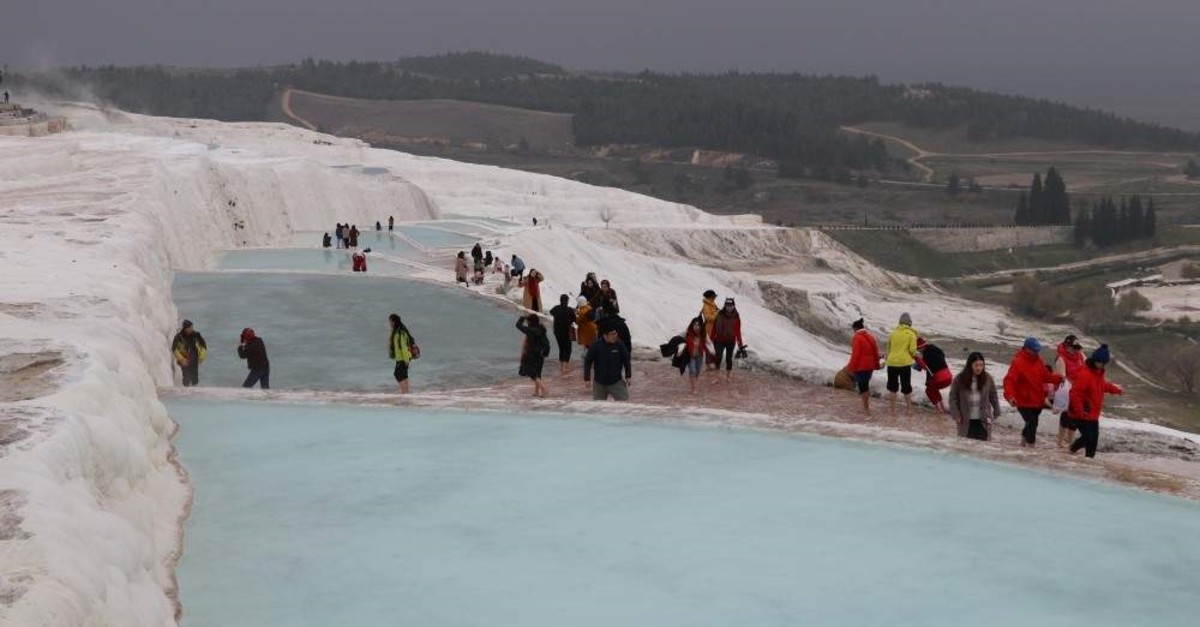 One of Turkey's leading tourist attractions, Pamukkale had its busiest year on record in 2019, welcoming 2.58 million local and foreign tourists, an all-time high.

Located in the central Aegean province of Denizli, Pamukkale is famed globally for its unique travertine terraces and their healing waters, as well as its ruins, which offer tourists the chance to glimpse traces of a civilization that dates back around 2,000 years. The site also hosts a number of items of significant historical and cultural value, including the Cleopatra Pool, an ancient theater, the Gate of Hell and the tomb of apostle St. Philip, among others.

The last year's record figures are remarkable considering that in 2000, Pamukkale hosted only 839,264 visitors at a time when the total number of foreign tourists in Turkey stood at just 10.43 million.

Tourism professionals and local business owners aim to increase the number of local and foreign visitors to over 3 million over the course of 2020.

Indicating that 2019 had been a bright year for the region, Köseoğlu noted that the town hosted around 15,000 visitors some months while at other times it welcomed between 350,000-400,000 guests.

"In general, we saw significant increases in the number of visitors coming from Russia, Germany and the U.K. especially in 2019. Apart from this, there was an increase in the tourists coming from Far East countries," he told Anadolu Agency (AA).

Pointing out that Pamukkale had a brand value that contributed a great deal to tourism in the country overall, Köseoğlu continued: "We believe that we can reach much better figures as of 2020. We have set a target of pushing for at least a 20% increase on 2019's figures. We are aiming for 3 million visitors. We have to engage in serious measures on behalf of regional tourism in order to reach this number of visitors."

Indicating that Pamukkale lies at an important geographical crossroads, Köseoğlu continued: "Our ancient city of Laodicea is on the UNESCO World Provisional Heritage List. Plus, the proximity of Lake Salda and the ancient city of Aphrodisias makes Pamukkale and the region much more meaningful and valuable in terms of our country's tourism. In this sense, we believe that we will reach serious numbers of visitors in 2020. We also aim to promote our province in the best way possible at industry exhibitions in Turkey and around the world."

Tourism operator Yücel Dağlı also praised the performance in 2019, noting a significant increase in the number of South American and Far Eastern tourists. According to Dağlı, 2020 will be a better year for Pamukkale since Turkish Airlines (THY) has added a new Chinese city to its flight network.

Turkey's flag carrier last week announced it has added direct flights from Istanbul to Xi'an, China, the historical starting point of the Silk Road, as of Dec. 30. The Chinese city is the carrier's fourth destination in mainland China and its 318th global destination.