Cappadocia breaks record in tourist numbers with over 3.8 million visitors 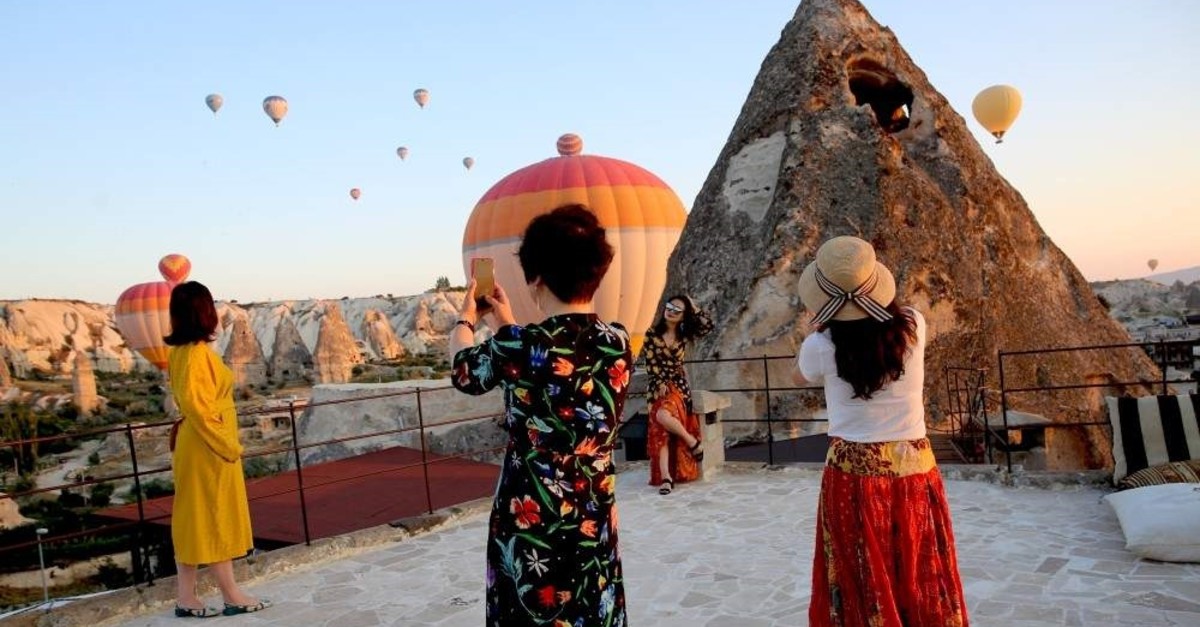 With increasing worldwide popularity as a touristic destination, Turkey's Cappadocia saw an all-time record in the number of foreign visitors in 2019 with a 30% rise compared to the previous year

Cappadocia, which lies in Central Anatolia's Nevşehir province, has become a popular destination worldwide in recent years with its famous underground cities and its "fairy chimney" volcanic cones, hot air balloon trips as well as houses carved into rocks, churches, chapels, and shelters used during the early years of the Christian faith.

According to Nevşehir Directorate of Culture and Tourism figures, Cappadocia's museums and archaeological sites were visited by a total of 3,834,134 people in 2019, a 30% rise compared to the previous year and a 157% rise compared to 2016 when the region hosted around 1.5 million visitors.

The upward movement in the number of tourist arrivals has been continuing since 2016 when the number had dropped dramatically by more than 1 million due to the negative trends in Turkey's tourism industry. August topped the season with more than 566,000 visitors while the Göreme Open Air Museum became the top touristic site attracting over 1.4 million tourists, according to the official data. In 1985, Göreme National Park, which houses the Open Air Museum, was added to UNESCO's World Heritage List, and today it is one of Turkey's top 10 tourist attractions.

Talip Aldemir, chairman of the Association of Turkish Travel Agencies (TÜRSAB) Cappadocia Regional Chapter Executive Board (BTK), said that they are expecting to break another record in 2020 by hosting over 5 million tourists.

Aldemir noted that foreign visitors are mostly coming from the Far East, Balkans, Russia, and other European countries.

"We are targeting to host over 7 million tourists in 2023. We can reach these goals but our infrastructure is not sufficient." Aldemir said the region needs to undergo capacity expansion to meet the international demand by increasing its accommodation capacity and offering more hot air balloon trips, the most popular activity for tourists visiting the area. In the first nine months of last year, hot air balloon tours generated a 78 million euros revenue with a total of 437,516 tourists enjoying floating over the skies of Cappadocia. These one-hour tours, organized by numerous companies in the region, cost between 170 and 200 euros per person.

Coşkun Kırtıl, the owner of a travel agency operating in Cappadocia, said the increased use of social media fueled the demand in the region in recent years and Cappadocia has become a top destination with more people sharing their experiences online. "Cappadocia has unique natural, historical, and cultural wonders that stand out," Kırtıl said, adding that tourists visit the region to ride hot air balloons and capture the surroundings from above.

Despite the increasing demand, Kırtıl said travel agencies could not respond to all of the tourists' accommodation requests because of the inadequate hotel capacity in the region. "Investments made in accommodation facilities and additional flights are needed to increase the number of people coming to the region."

Tayfur Taşkın, a manager operating a hotel carved into rocks for the last 15 years, noted that they experienced a 90% occupant rate last year. He added that they are planning to increase the bed capacity of the hotel in 2020 to meet the demand. To answer the rapidly rising demand for Cappadocia from Asian countries, Turkish officials have taken steps to introduce direct flights to the region from East Asia. Mustafa Açıkgöz, a lawmaker of the ruling Justice and Development (AK) Party from the central Nevşehir province, said in May that they are working on launching direct flights to Cappadocia from Japan, China, Taiwan and other Southeast Asian countries.

Last year, the Turkish Parliament also ratified a bill that aims to protect the historic fabric of the region. With the bill approved, Cappadocia Field Authority will be established, and it will be entitled to demolish or restore buildings and sell or rent government property in Cappadocia.