Cruise ships look to boost earnings in Istanbul this year 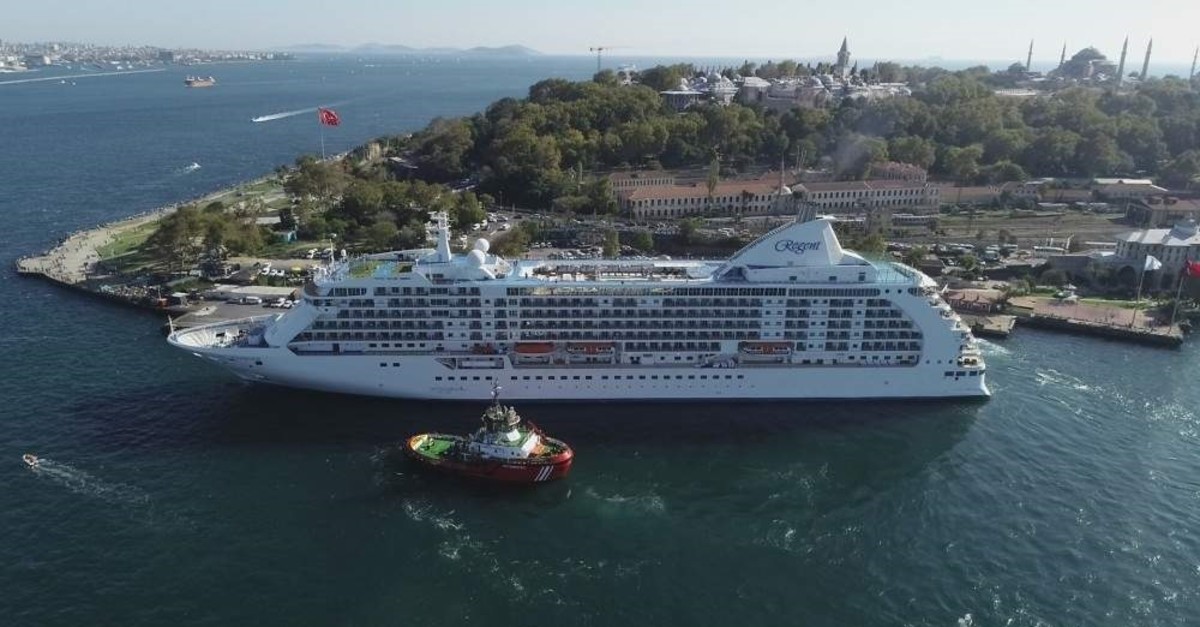 | DHA Photo
by Daily Sabah Jan 08, 2020 9:04 pm
Turkey's largest metropolis Istanbul has been re-added in the routes of international cruise operators after overcoming the obstacles in accommodating cruise ships, generating excitement among tourism representatives and tradesmen.

The city enjoyed a fruitful year in 2019 and welcomed 13 cruise ships. It is expected to gain further ground throughout this year. Istanbul has already received bookings from 64 cruise ships 2020, the Hürriyet newspaper reported Wednesday.

The figure is expected to further rise with Galataport, which is set to be inaugurated in March and begin operation at full capacity in 2021. In fact, the port has already begun receiving bookings from cruise liners seeking to drop passengers off in Istanbul's cultural heart.

The report cited cruise line representatives pointing to the high profitability of Istanbul for cruise companies. They said Istanbul is outdoing giant locations in terms of the number of extra tours and revenues, including Barcelona.

Royal Caribbean Turkey General Manager Alper Taşkıranlar said while a maximum of five to six extra tours is offered in Barcelona or Marseille, this figure goes up to 20 in Istanbul.

Cruise ships that obtain 1,000 euros per person earn a turnover of 4 million euros, he added. "When 3,200 people buy extra tours for 150 tours, the turnover amounts to 480,000 euros. Istanbul is very important for cruise companies," he noted.

Taşkıranlar underscored that Royal Caribbean's latest cruise ship, currently under construction, will arrive in Istanbul later this year when it lands in the water.

"If Istanbul becomes the main port, both cruise companies and Istanbul will gain much more," he added.

Princess Cruise Turkey General Manager Tolgar Bıyıklı noted that companies have long been unable to come to Istanbul because of security concerns and problems with ports.

Bıyıklı said arrivals will begin in 2020. "Not only Istanbul but also cruise companies make money from these arrivals," he continued. "There are many places to visit in Istanbul. Cruise companies earn 150 euros per person for extra tours," he said, adding that a cruiser can make more money in case it stays in Istanbul.

"Even in Barcelona, cruise lines do not make as much money as in Istanbul, since passengers are touring alone there," he remarked.

Galataport expects to welcome 1.5 million cruise tourists to Istanbul. The port has a capacity to host around 25 million visitors per year, including 7 million foreigners. The estimated revenues from the increasing number of tourists are expected to come to around $1 billion.

Work is ongoing for the port project, which will be located on the shore along Istanbul's central Karaköy district. The area is set to host a number of arts centers, a world-class cruise terminal, hotels and various boutiques, cafes and restaurants, along with office spaces. The terminal includes port space capable of providing services for the world's largest vessels, a passport terminal, check-in areas and large-scale waiting rooms.

He indicated that cruise lines have great confidence in Istanbul, as the city brings a significant sum of money to cruise companies as well.

MSC Cruises Turkey General Manager Necla Tuncel remarked that Istanbul is nip and tuck with Rome among the destinations that bring the highest revenue for cruisers.

"An average of 50 buses are used for extra tours for passengers coming to Istanbul by a cruiser. In the surveys we conducted last year, Istanbul was among the three favorite destinations," Tuncel noted. She also said arriving passengers want to visit Istanbul with a guide and tour – which brings considerable gains for cruise ships.
RELATED TOPICS