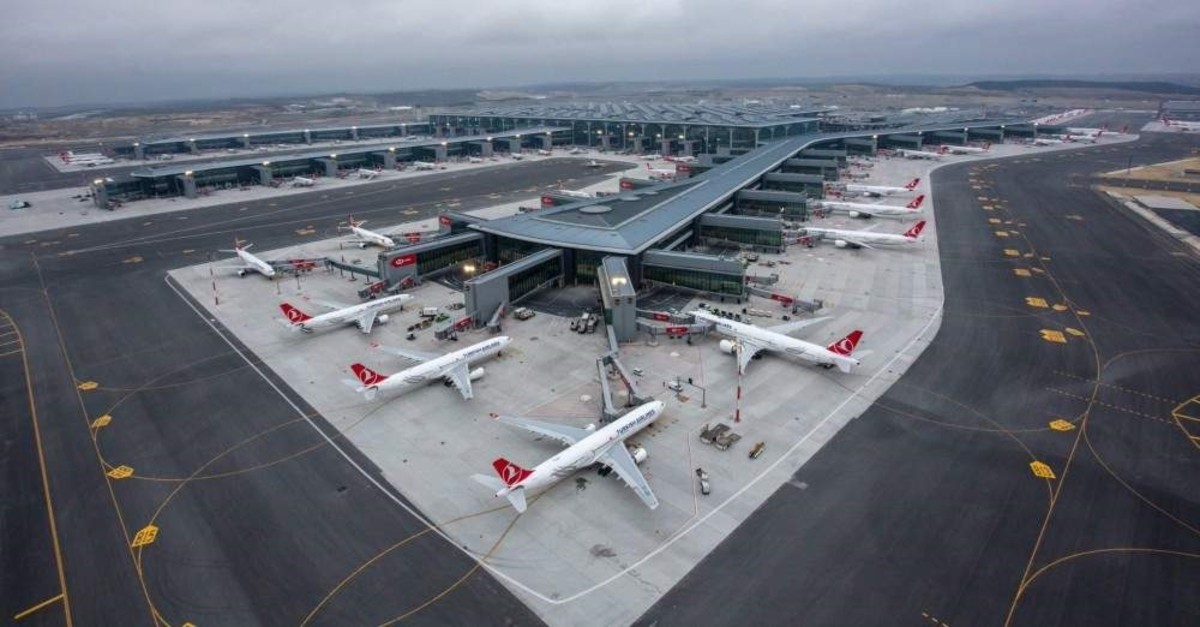 Turkey's flag carrier Turkish Airlines carried over 74.3 million passengers in 2019, a year that witnessed some major developments such as a grand switch to Istanbul's new mega airport and grounding of its Boeing 737 Max aircraft fleet.

The number of passengers it served last year was 1.1% lower compared to 2018 when it served a total of 75.1 million passengers, according to the company's traffic data Friday.

Turkish Airlines saw a 3.8% increase in passengers last year on international flights, while passengers on domestic flights declined by 7.5% year-on-year. Its number of transit passengers surged by 5.4% year-on-year to nearly 24.57 million.

The carrier experienced a noteworthy rise in the African market, which is said to have made a significant contribution to Turkey's trade and economic relations within the continent. It flew some 3.65 million passengers in the market, Demirören News Agency (DHA) reported.

Similarly, THY has also been seeing high demands in Latin American countries. Besides their high interest in Turkey, Istanbul has also become an important transit point. The carrier served some 477,275 passengers in Central and South America as well, an 18.4% year-on-year rise.

Among others, it is said to have carried around 23.72 million passengers in Europe, 6.28 million in the Middle East, 5.91 million in the Far East and 2.39 million in North America.

As for December, Turkish Airlines served some 5.48 million passengers, a 0.5% drop compared to the 5.5 million it flew in the same month in 2018. Its occupancy rate in the month was up 0.5% to 80.7%, the company said. The number of passengers on domestic flights was down by 11.5%, while passengers on international flights increased by 7.7% year-on-year, it added.

The biggest move in 2019 was THY's shift from Atatürk Airport, on the edge of the Sea of Marmara, to Istanbul Airport, rising from the outskirts of Turkey's most populous city, perched firmly on the shores of the Black Sea, in April. A success story in its own right, the transition was said to be the greatest logistical operation in civil aviation history.

Thousands of tons of equipment, from huge aircraft-towing vehicles to extremely sensitive materials, were ferried across the city. Trucks carried equipment a total distance of 400,000 kilometers, an equivalent of going 10 times around the world. Over 1,800 personnel were involved in the operation.

Istanbul Airport was officially opened in a grand ceremony on Oct. 29, 2018, coinciding with the 95th anniversary of the founding of the Turkish Republic. Its first phase became fully operational on April 7 last year, as it took over air traffic from the now-closed Atatürk Airport, which has transitioned to other uses such as training activities, aviation fairs and civil use, while some parts are to be transformed into a public park.

The new airport can handle 90 million passengers per year in the current phase of development, which, while it is a high figure, is nothing compared to its potential capacity to serve 200 million passengers after the completion of all four phases and six runways, scheduled to finish by 2028. It will be home to more than 100 airlines flying to over 300 destinations around the world.

In one of the major developments that marked 2019 in terms of civil aviation, Boeing's top-selling 737 Max was grounded worldwide since March after two crashes within five months in Indonesia and Ethiopia killed 346 people.

As one of the companies hit hardest by the decision to ground the aircraft, Turkish Airlines had to re-evaluate its operations strategy due to the problems with the 737 Max.

THY said on Dec. 31 that it had come to an agreement with Boeing concerning compensation for certain losses caused by the grounded and non-delivery Boeing 737 Max aircraft. The airline did not specify the size of the payment but Turkey's Hürriyet newspaper reported it was worth around $225 million.

THY ranks 10th among the passenger airlines globally with its current fleet size, its chairman İlker Aycı said last week. Among the top 10, it has the fourth-youngest fleet. The carrier is expected to add another 28 aircraft to the fleet in 2020, while Aycı added that the company is open to rental options.

After launching services to 10 new international routes in 2019, the carrier closed the year with a flight network including 318 cities across 126 countries. According to its chairman, THY will be opening four new routes in 2020, namely Malabo, Equatorial Guinea, Tokyo's Haneda Airport, Newark, New Jersey and Vancouver, Canada.