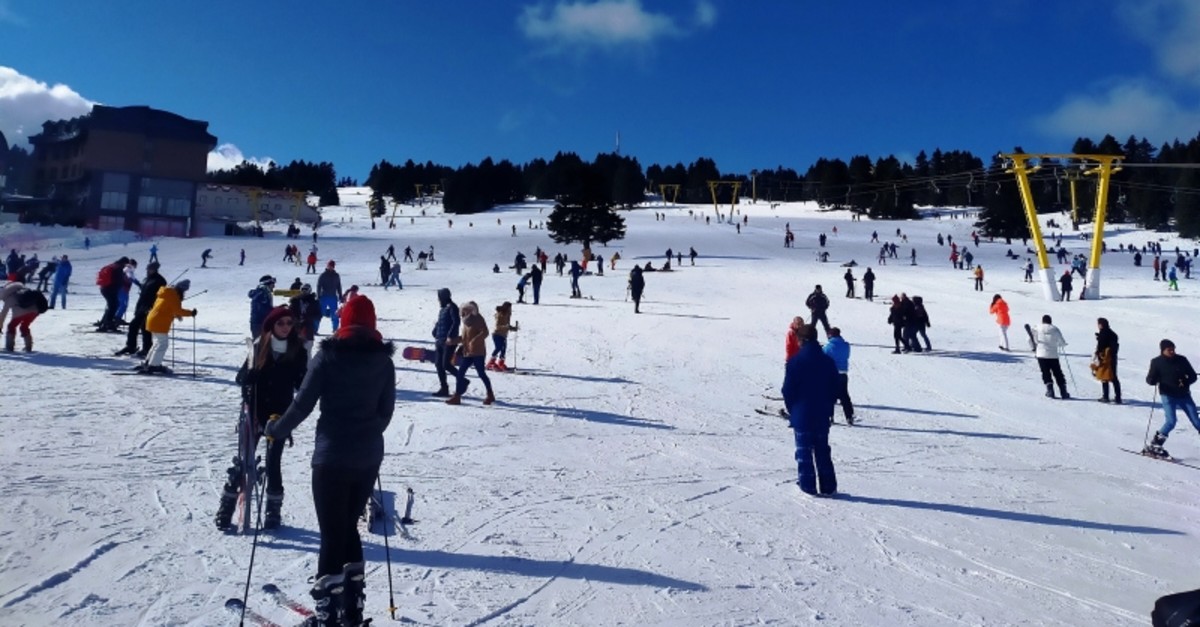 The semester break, which kicked off Saturday after the first semester of the 2019-2020 school year ended Friday, has created a stir at the leading ski destinations across Turkey.

Ski lovers have flocked to the tracks of famous winter tourism centers such as Bursa's famed Uludağ mountain, Palandöken in Erzurum, Kartalkaya in Bolu and Erciyes in Kayseri, as well as Davraz in Isparta, Mount Murat in Kütahya, Mount Yıldız in Sivas and Bozdağ in Denizli.

Sector representatives estimate that around 2 million people will go on vacation during the two-week holiday and generate a significant source of income for facilities across the country. The mobility is said to have boosted hotel occupancy rates. Pointing to an average three-day accommodation, the representatives say vacation activities during this period are expected to generate up to TL 6 billion toward the economy.

While overnight visitors flock to small holiday resorts in nearby provinces, such as Davraz, Mount Murat and Mount Yıldız, the economy of provinces such as Sivas, Kütahya, Denizli and Isparta will also be revived.

The intense demand for thermal treatments, which is indispensable for winter tourism, has brought the semester holiday one week forward. Hotels that stand out with their thermal facilities such as those in Afyon, Denizli, Yalova and Eskişehir are said to have approached full capacity.

"There is a high demand in our hotel in northwestern Yalova's Termal district with a capacity of 2,200 beds during the semester break," Terma City Hotel Operation Manager Mustafa Hügül told Turkish Sabah daily Saturday. "Occupancy has reached around 90%. With the effect of the holiday, reservations increased by 50%."

While families opt for hotels that are kid-friendly in the Mediterranean resort city of Antalya, university students set out to the eastern city of Kars on the traditional Eastern Express or the new Touristic Eastern Express.

Kaan Kaşif Kavaloğlu, the chairman of Limak Hotels, highlighted the great interest in hotels, especially those that are kid-friendly, in Antalya. "They stay three to four days on average. Approximately 50,000 people will be in Antalya during the semester break," he added.

Mustafa Altun, general manager of Sivas Special Provincial Administration Buruciye A.Ş., on the other hand, noted that there are two chairlifts and a teleski on the mountain. "We have two hotels and 220 beds. Hotels have reached full occupancy. There is a high demand for Tokat and Sivas. They also fly from Istanbul," he continued.

"We welcome overnight guests from nearby cities such as Antalya, Denizli, Muğla and Uşak in Davraz," Davraz Karlıkaya Tourism Infrastructure Service Association Chairman Abdullah Çelik, told Sabah. "We have three hotels on the mountain, which are 100% full. In the winter, 40% of the hotels in downtown Isparta are filled due to the mountain."

Kayseri Erciyes A.Ş. Chairman Murat Cahit Cıngı stated that they expect 500,000 people, including overnight visitors, during the break, adding that mountain hotels are 100% full, followed by city hotels that have a 90% occupancy. "City hotels provide 85% of their occupancy from ski guests. Prices increased by 25%," he said.

Gazi Murat Şen, chairman of Denizli Touristic Hoteliers Association, pointed to both thermal and skiing opportunities in western Denizli province, recalling that the metropolitan municipality invested in three ski tracks in Bozdağ, 80 kilometers from the city, three years ago. "There are three chairlifts and 11 tracks. This place is in great demand from Denizli and surrounding cities," Şen added.

Ali Gümüşhan, chairman of Zafer Touristic Hoteliers Association, stressed that families did not wait for their children's report cards and began to arrive Jan. 10, afraid of not finding a place to stay. "The holiday period has increased to 20 days in Afyon," he continued. "The average room price is TL 1,000. They stay for three to four days. There are 150,000 reservations."

"Our hotels are 100% full until April," Hakan Doğanay, Kars Culture and Tourism provincial director, noted. "Since there is no room in the hotels, we send the guests to Ardahan located one and a half hours away. During the semester break, students come to our city by train, while families come to Sarıkamış to ski by plane."