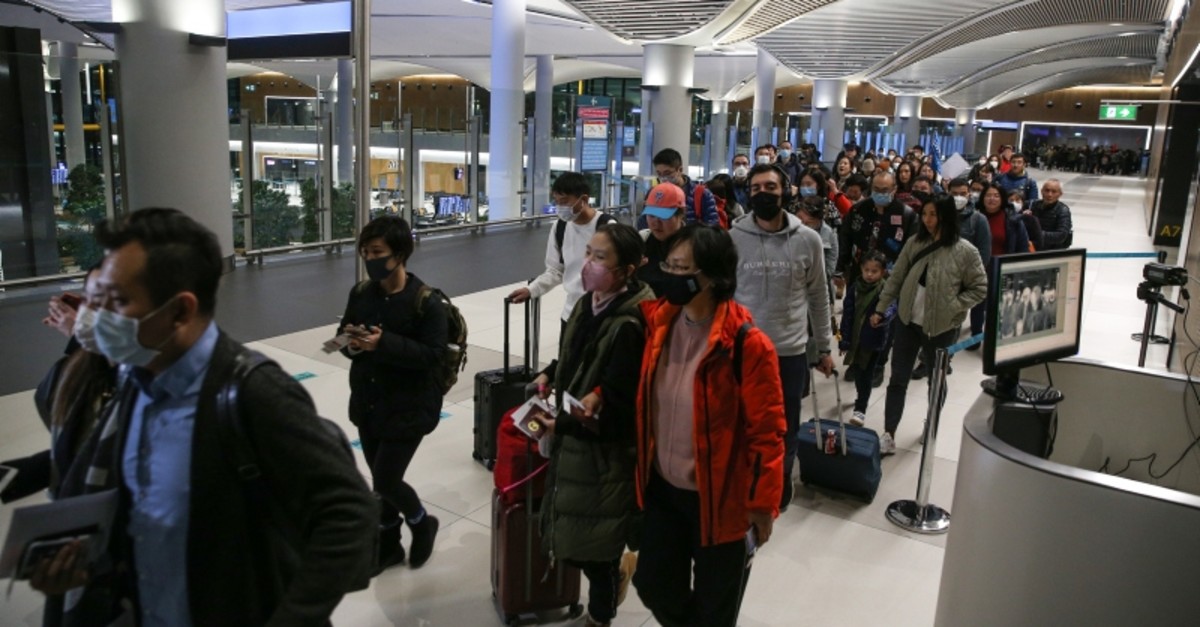 Passengers coming from China are subjected to thermal camera scanning at Istanbul Airport amid a deadly virus outbreak in the Asian country. (AA Photo)
by Daily Sabah Jan 24, 2020 4:00 pm

The cancelations due to the outbreak of the deadly virus came amid the Lunar New Year, China's busiest travel period when around 30,000 Chinese tourists were expected to arrive in Turkey

Almost half of the bookings by Chinese tourists for Turkey were canceled ahead of a busy travel period for the Chinese due to a deadly new virus outbreak in the Asian country’s southern city of Wuhan late last month.

More than 30,000 Chinese tourists were expected to visit Turkey in January, a busy month for Chinese tourists as many people make their Lunar New Year holiday plans throughout the country and overseas in this month, but this number is now likely to decrease, tourism representatives have stressed.

The spread of the outbreak caused the shutdown of at least 13 cities in China, including Wuhan, Ezhou, Huanggang, Chibi, Qianjiang, Zhijiang, Jingmen and Xiantao, all in central China's Hubei province, where the illness has been concentrated.

Flights and trains were also halted earlier on Thursday after the pathogen, known by its technical name 2019 Novel Coronavirus (2019-nCoV), as of Friday had claimed 26 lives and affected hundreds of people in Chinese cities. The virus was encountered in a few cases in nine other countries, including Hong Kong, Macao, the United States, Japan, Taiwan, South Korea, Thailand, Singapore and Vietnam.

Körükçü noted that that there had been cancellation requests for bookings made from Malaysia and Japan as well.

The number of Chinese tourists visiting Turkey has been on the rise over the last four years. A total of 403,739 Chinese tourists came to Turkey last year, while the number was 313,704 in 2015. Some 25,033 of them traveled to the country in the first month of 2019, while almost 7 million Chinese tourists were estimated to have traveled overseas in the same month of the year.

Also speaking on tourism expectations regarding Chinese tourists, Ali Onaran, chairman of the Turkey-based tour company Prontotour, which provides monthly tours to China, noted the company hasn’t received cancellation requests so far but has seen a slowdown in sales.

The Chinese government has classified the outbreak in the same category as the SARS epidemic, meaning compulsory isolation for those diagnosed with the illness and the potential to implement quarantine measures. But they still have not been able to confirm the exact source of the virus, although animals are suspected to be the primary source of the outbreak, with the Wuhan market believed to be its epicenter.

The number of confirmed cases of the new coronavirus has risen to over 830, the National Health Commission said Friday morning. Authorities were also examining 1,072 suspected cases.

Meanwhile, World Health Organization (WHO) chief Tedros Adhanom Ghebreyesus said he was postponing a decision on whether or not to declare a global health emergency – a rare instrument used only for the worst outbreaks – saying he needed "more information."