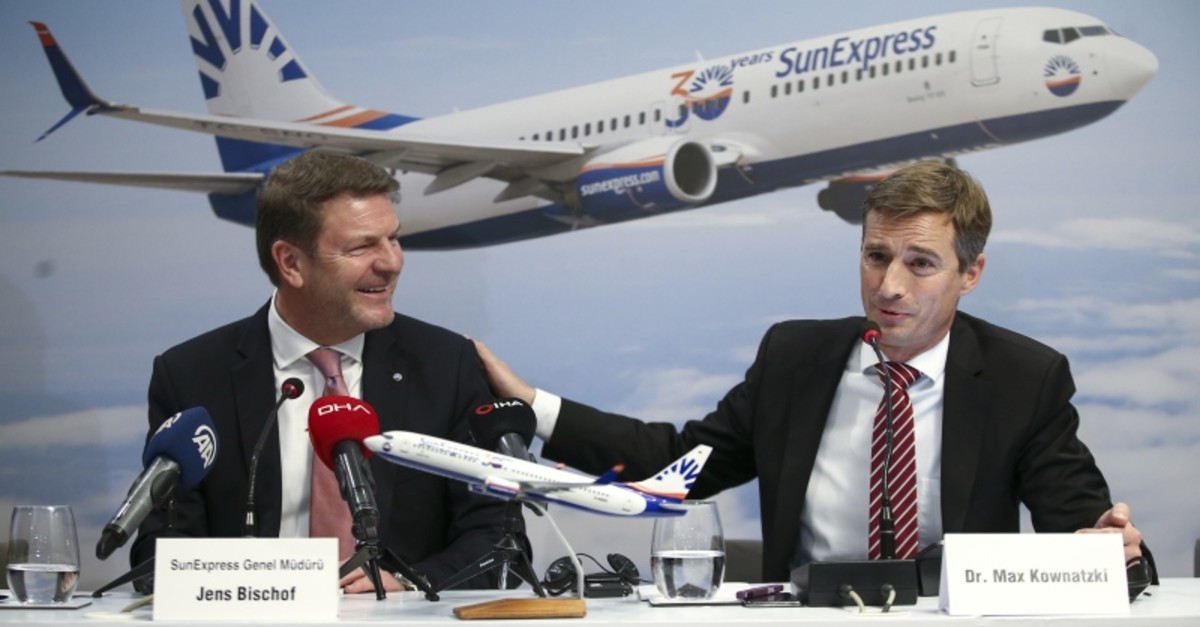 As a joint venture between flag carriers Turkish Airlines and Lufthansa, aviation firm SunExpress in 2019 achieved the highest revenue in its 30-year history, it announced on Tuesday.

The firm's revenue increased 10% in 2019 on a yearly basis by generating a revenue of over 1.4 billion euros ($1.65 billion) and carrying over 10 million passengers with a load factor of 83%.

Speaking at a press conference in Istanbul to announce the results, SunExpress CEO Jens Bischof said: "With our strong financial structure and expertise as a leisure carrier, we will continue to be the backbone of air travel for the Turkish tourism industry in 2020."

For summer 2020, SunExpress offers a record capacity of 7 million seats for flights between Europe and Turkey.

"We are the airline carrying the highest number of tourists to the Mediterranean and Aegean regions with scheduled flights. In addition, we directly connect a record number of Anatolian cities to Europe. This summer, we will operate scheduled direct flights to 39 destinations in Europe from 17 cities in Turkey."

This summer, SunExpress will connect Antalya – dubbed Turkey's tourism capital and the airline's main hub – to eight domestic destinations and 43 international destinations. The airline will launch new routes and offer additional flights in a bid to serve Antalya with over 4.5 million seats.

SunExpress will offer two new flights to and from Antalya to the northern German port city of Bremen and Marseille in southern France. The airline will also increase weekly flights to the Hungarian capital Budapest to six, the Austrian capital Vienna to five, the Belgian capital Brussels to four, the Czech capital Prague and French capital Paris to three and France's second-largest city Lyon to two.

"As one of the largest companies and biggest employers in Antalya, we are making a significant investment in our maintenance and repair center, which we expect to be operational by the end of 2021. The project will be a first in Antalya, and the center will initially serve SunExpress aircraft and then will start serving other airlines later," Bischof said.

SunExpress is also launching five new destinations from Izmir to Italy's Milan, Ercan Airport in the Turkish Republic of Northern Cyprus (TRNC), Budapest, Prague and the North Macedonian capital Skopje. The airline currently offers three daily flights from Izmir to the German cities of Frankfurt, Düsseldorf and Munich. The weekly number of flights to Paris, London and the Irish capital Dublin will also be increased to five, three and two, respectively.

Bischof said the airline will also continue to focus on flights from Anatolia, which were initially launched in 2010 for mutual family visits by Turks living in Europe. "Since then, these direct scheduled Anatolian flights have continued and become SunExpress' fastest-growing market. We now offer almost 1 million seats from 13 Anatolian cities to 17 European cities with direct scheduled flights. This summer SunExpress will start flying from Adana to Hamburg, Vienna and Brussels, from Balıkesir (Edremit) and Eskişehir to Düsseldorf, from Malatya to Frankfurt, and from Konya to Helsinki."

At the end of the conference, Bischof said beginning March 1, he will take over as CEO of low-cost carrier Eurowings, a wholly owned subsidiary of Lufthansa. Max Kownatzki will take over as the new CEO of SunExpress from April 15. Kownatzki, 47, started his career in 2002 at the strategy consultancy Oliver Wyman in New York and Munich. Until 2013, he advised clients from the airline industry in various management positions with a special focus on strategic alliances and commercial topics.

In 2013 he was appointed chief strategy officer of the Australian Jetstar Group, a subsidiary of Qantas Airways. Two years later, in 2015 he joined Lufthansa as chief commercial officer at Eurowings Europe and then led the establishment and development of the company within the Wings Project. Subsequently, he was in charge of business development at Eurowings as senior vice president. Since 2017, he was accountable for network planning and strategic alliances of the hub airlines Lufthansa, Swiss and Austrian Airlines.

Founded as a joint venture of Turkish Airlines and Germany's Lufthansa in 1989, SunExpress flies to more than 90 destinations in over 30 countries in Europe, the Middle East and North Africa. In 2019, the airline operated record aircraft and welcomed some 10 million passengers.